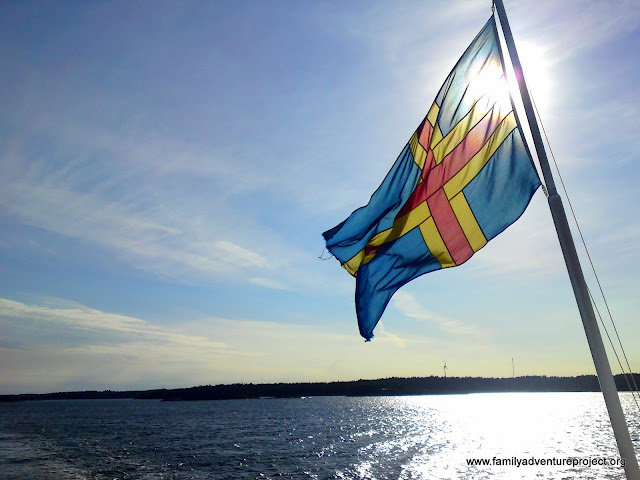 The flag of Aland, neither Finland nor Sweden

The chair took off and skated down the deck clattering into the deck rails that stopped it spinning off into the Gulf of Finland.  Hannah squealed with laughter, although you could hardly see it for the hair wrapped around her face by the wind.  Our ride across Ǻland and the Finnish archipelago was supposed to have been a relaxing week of island hopping but had somehow become as tangled as Hannah’s hair.

Shocked by Fininish prices, hills you could feel in your legs, a strong Northerly wind and still nursing a hangover of tiredness from the ferry that dropped us in Mariehamn before sunrise, what I’d  imagined as six easy days of riding and ferry hopping to Moominworld had turned into a struggle with the elements, tiredness, ferry timetables and a budget that now made us feel like paupers.  But the kids’ excitement at getting closer to meeting Moomin, Snork Maiden, Sniff and Stinky helped keep us going. And like all the best struggles it was beautiful, once you wiped the hair from your face. 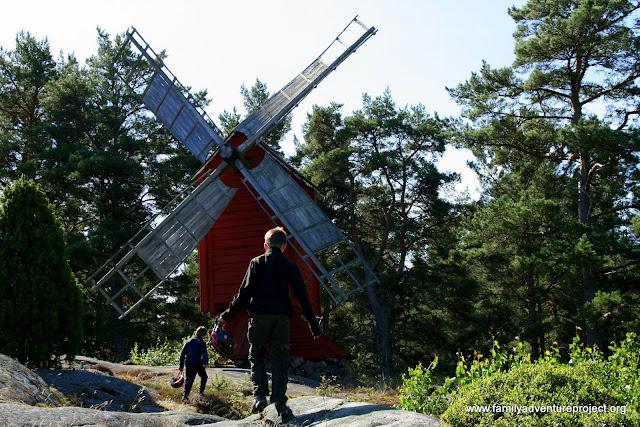 Aland is special, not Finland nor Sweden

“See the osprey and sea eagle?” A retired Swedish man on deck next to us pointed out a small group of birds hovering high above one of the rocky islets in the sea around us. He was on his way to a rented summer house on Brando.   “People in Stockholm don’t understand why I come all this way to rent a place when I could own something on the Stockholm archipelago. But Ǻland is special, quieter, different.  More islands, less people.”

They say there are 20,000 islands scattered between Sweden and Finland, some 6,000 of which make up the little known island province of Ǻland, a Swedish speaking part of Finland that is neither Finnish nor Swedish.  Not that it mattered to us since we can’t speak either. But the Swedish man spoke English. “I live in England now, near the Thames but have my holidays here. Although I can’t buy a place in Ǻland, not unless I was born here….”  With their own flag, stamps and traditions, some 25,000 Ǻland islanders preserve a unique and autonomous island culture, controlling amongst other things who can and can’t live on their islands through their own parliament.

“They may look alike but the islands are different,” explained the man surveying the shattered lumps of granite around us. “That one has no pine, only juniper…” He pointed to a small forested rock, edges washed pink by the sea, fringed white with breaking surf.  “And that one, hardly big enough to call an island, is a cormorant colony. Ruined my fishing, those greedy birds.”

On our journey across the islands to Finland we followed the Postvagen, an old postal road that was once a strategically important route for mail, goods and people travelling between Finland and Sweden.  Islanders used to form a kind of human chain, ferrying mailmen and parcels from one island to another on little wooden boats in summer, and across safe routes on the sea ice in winter.  These days bridges and vehicle ferries provide more reliable and less perilous connections, that is if you can ride to meet the ferry schedule. Which isn’t as easy as it might sound.

Unused to wind or hills, plagued with residue tiredness and annoyed by mosquitoes we initially found our ability to cover the relatively small distances involved drastically reduced.  With reward linked to both distance covered and average riding speed, Matthew and Cameron were particularly annoyed by this, particularly on the first day when we managed only 11km in 11 hours. But things did improve as we got the hang of reading the timetables, adjusted to the pace of island life and learnt how to pace ourselves to arrive before a ferry left. Picking our way across dozens of islands by land-bridge, bridge and cable ferry we figured out how to spot the best outcrop for a picnic, find the best cove for a swim, climb up and over the top of islands and still be in time to catch the more infrequent longer ferries that connect up the larger islands.  Not that they moved much more quickly than we did, manoeuvring slowly and skilfully through narrow channels, leaving their wake breaking around hundreds of granite pink, forest green and sandy golden islands. 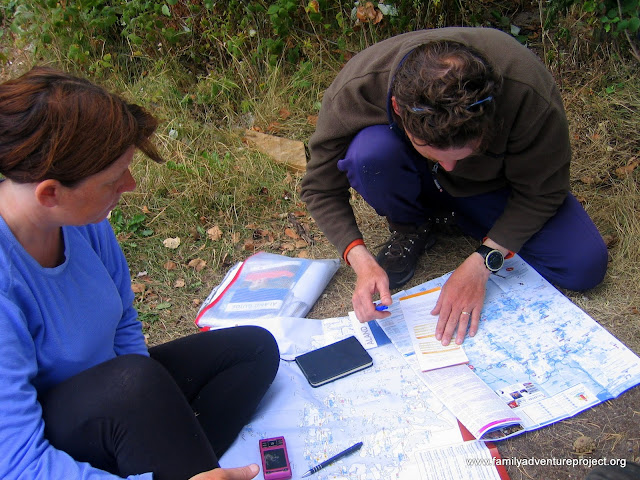 And ever changing Aland weather

And as we adjusted to Ǻland the weather turned with us, dark silvery seas turning blue again as the mist and rain retreated and sun returned.  Summers are savoured here, every village raising decorated midsummer poles, brightly dressing them in Ǻland red, yellow and blue to celebrate a brief respite from the darkness and cold of winters that freeze the sea over.  Cycling Aland islands in the sunshine, past traditional wooden huts on stilts and ore red summer houses, it was hard to imagine we could perhaps walk, drive or even cycle between islands come mid-winter when the sea ice returns. 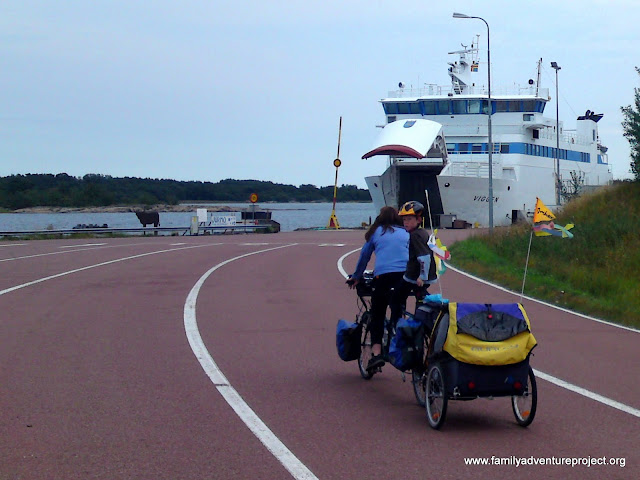 When the plan works, it’s a satisfying feeling..

The last two days riding to Naantali were more like those in my orginal plan; short days of picture perfect riding, through forest, around rocky inlets, along channels, across islands and always with the sun, sea and a swim to hand. We dropped in at quaint museums of island life, picnicked on the shore and skinny dipped in the sea. With the Baltics firmly behind us now, we looked forward to what had long been billed to the kids as the pinnacle and rationale for the whole trip, a visit to Moominworld to meet the Moomins and celebrate their 65th anniversary with them. 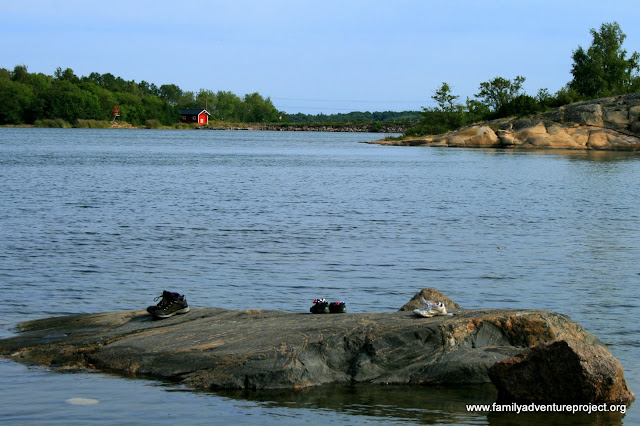 Plenty of places for bathing

“Do the Moomins really live on an island here?” asked Hannah as we pitched the tent in the wooded campsite in Naantali. Having checked Moominworld was open I reassured her it was so and that we would visit them after just one more sleep. As we lay in the tent together anticipating the day ahead, the kids taught us the Moomin song, briefed us on the intricacies of the various characters and speculated on who we would most identify with.

“Mum, you could be Moominmamma,” said Cameron, “except you don’t have a handbag. So I think you  must be most like Snork Maiden.”

“Dad I think you’re most like Stinky,” said Matthew referring less I think to my character and more to my shoes.