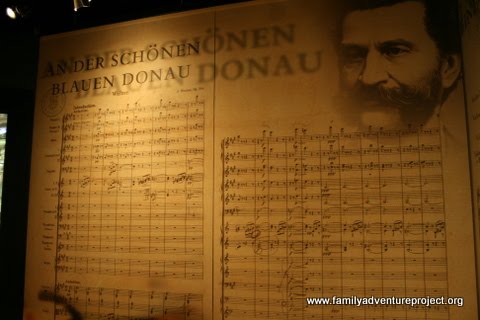 Here’s the score, now you conduct it

Music in Vienna for families

A two year old girl with a blonde pigtail in a pink Hello Kitty T shirt is conducting the Vienna Philharmonic Orchestra. Badly. She keeps batting the score with the baton. Then she bats the rope keeping her audience back. And finally she bats her mother who is trying to remove her. Suddenly the orchestra has had enough. The lead violin stops the Radetzky March, turns to the pigtailed one and starts shouting, “Your waving about looks nice but it’s not conducting. I could do a better job myself.” The girl in the pigtail is ejected before she starts to cry.

Then up steps forward a similar blonde girl about two years older. Her status is reflected in a second pigtail, and she wears an identical Hello Kitty T shirt. This sister is off as soon as the music starts, waving her baton at the speed of light. Members of the Viennese Philharmonic try to keep up with her; scraping their bows at a hundred miles an hour and doing things with their lungs you wouldn’t have thought would be humanly possible. But the first violinist soon gets the hump, stands up and waves his bow at her. “Excuse me, but this is useless,” he cries. The rest of the orchestra stand and applaud him for his bravery at standing up to such a feverish and determined conductor.

Now a third blond girl, about two years older, comes forward. She has three pigtails and a Hello Kitty T shirt. She takes the baton, pauses to compose herself and then stumbles through the score. She gets several hard glares from the first violinist, but he doesn’t go as far as stopping the orchestra.

Step up to the podium and take the baton

Our children are watching the orchestra on the big screen and the girls that stand before them, and Matthew is confident he can show them how it’s done. After all, he’s recently done his Grade Two trumpet exam, and he’s great at hitting things with sticks. So he grabs the glass baton from the girl and steps up to the podium, where the conductor in the film asks him to select his music. He chooses The Blue Danube and picks up the glass wand. The orchestra starts, and it doesn’t stop, but the assorted world class musicians have probably never played this classic Strauss Waltz in such a wide range of tempos. 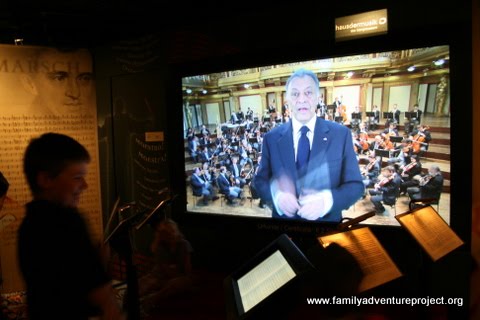 Baton ready, a few words from a professional and the orchestra is at your mercy

Conducting the Vienna Philharmonic is just one of the interactive exhibits in the superior Haus Der Musik in Vienna city. This centre provides an energetic waltz through different ages; looking at music of the past, the present, the future and the imagination. And at almost every stage it gives the visitor the chance to have a go. In the Brain Opera section, you enter the mind forest and try to perform or create strange music. The ringing tree can tell from your voice and feed back to you in sound waves whether you are calm or stressed. (We were all stressed!) In the sensor chair, your gestures create music out of thin air, or you can load the sound juke box, with multi coloured triangular chips that have recorded your own personal sounds, and play a cacophony of noise (or is it music). 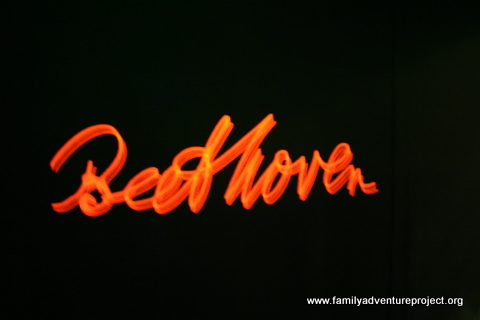 All the great composers are here

In the great composers section we are given pens to scribble on numbers on the wall. Hannah loves this and runs round trying to scribble on them all. This action starts the relevant commentary which we listen to by holding the pen like a telephone. Through our pens we are given cheerful and interesting insights into the lives of the great Viennese composers, Haydn, Mozart, Beethoven, Schubert, Strauss, Mahler, as we wander through sets recreating the living rooms, parks and pavilions of late 18th and 19th century Vienna. I learn how music changed irrevocably over this period as the composers were suddenly freed to create music for the public, rather than God or The Universe. This meant for the first time in history that classical music became a dialogue with the listener instead of a hymn to the heavens.

A musical education I wasn’t expecting

I learn that Schubert was some kind of morose popstar of the 19th century, who had a fear of travelling and liked to lie on the floor of a carriage when the train was going through a tunnel. I sit on a park bench surrounded by tree stumps and learn that Mahler introduced the practice of dimming the auditorium so audiences could concentrate. And I hear that Beethoven moved house an impressive 68 times and was probably very grumpy during the packing phases. To illustrate this the museum produces the last front door he ever walked through. Although perhaps it would have been more effective if they’d bought up every front door he ever owned and made you walk through each one with a suitcase. I also learn that Mozart has more internet entries than The Beatles and Elvis. This fact really impresses the children, but provokes a question from Cameron, “What about Pokemon. Is Mozart really more popular than Pokemon?” he asks. 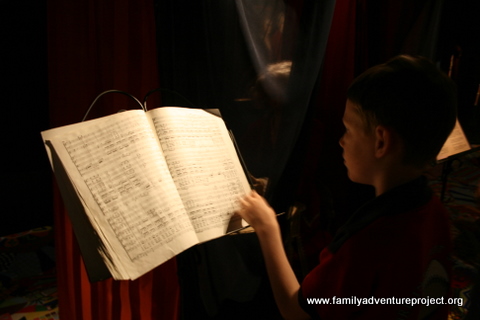 Before we leave the museum the boys play a game of musical dice. At the random throw of a dice, they select one of 1,679,616 possible musical phrases. The melodies for violin and cello then combine into their own personal Viennese waltz. As the computer plays it back to them, displaying the notes on a large screen, three girls in Hello Kitty T shirts approach and you can see the fear in the eyes of Matthew and Cameron at the thought of these pigtailed ladies being armed with giant dice. 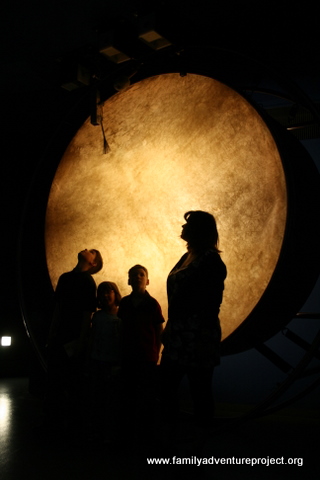 Not howling under a moon, but banging a drum

Meanwhile at the MozartHaus Vienna

Mozart would have approved of the interactive dice exhibit. He was a right old gambler who left his wife so poor by the time he died that she didn’t even have to pay inheritance tax. For musical purists, the city’s MozartHaus Vienna is the place to go to immerse yourself in the life of the great composer, and it’s a quiet and relaxing contrast to the high energy of the Haus Der Musik.

Mind you, Mozart was no shy and timid wallflower. He craved success, recognition and money and his lifestyle reflected his wealth and reputation. This, his last apartment, is a stone’s throw from Stephansdom, the cathedral. You can wander the different floors, and look out of the windows onto the Viennese streets and mentally place the musician in his own setting. Here everything is left to the imagination; bare floorboards and clean walls are a blank page on which you can create your own interpretation of his life, in the same way you do with his music. You are encouraged to visualise the endless stream of pupils. Or the society figures and great musicians who frequented the apartments. You are invited to imagine the Sunday afternoon concerts and how the city itself influenced the man who left such an important and long lasting legacy to Vienna. You are stimulated to recreate the games of billiards going on long into the night. And you are left to wonder why his wife put up with it all. If history is retained in the walls, then the walls of this house are filled with tunes, symphonies, laments and arias, as well as decadence, noise and excess. It’s just a case of walking around and tuning in.

Time for a Vienesse coffee?

Having spent a whole day immersed in music sound and history, we pay a visit to a famous coffee house; the Schwartzenberg Konzertcafé, the oldest café on the majestic Ring Boulevard. It is a favourite meeting place for people going off to concert halls and it also hosts concerts. Today there are no musicians; just waiters moving swiftly around with trays, glasses of icy water and tiny cappucino’s with whipped cream. I can’t read music very well, can’t play an instrument and I’ve never been to a big classical concert. But today I am hearing melodies in the chink of a spoon on the coffee cup, the rush of soda water onto freshly squeezed lemon, the banter between waist-coated waiters, the chatter of tourists and the hum of passing trams. As Matthew re-enacts his conducting of The Blue Danube with an ice cream spoon, I hear the snatches of the work of the great composers in my head in a contemporary urban setting. Who says a museum is all about the past?

Disclosure note: Thanks to Haus Der Musik and MozartHaus Vienna for providing admission tickets to allow us to bring you this story.

Have you been on a musical journey in Vienna or elsewhere? We’d love to hear about it in the comments.