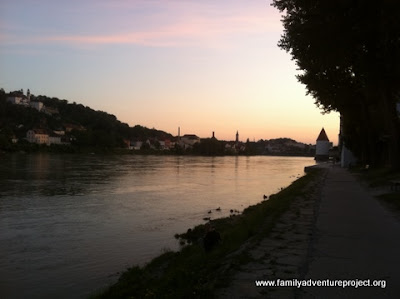 To say our host has eclectic tastes is an understatement. And she seems particularly partial to pictures. Assorted frames cover the walls. And the vents. And the lights. Even where there’s no place to hang something she’s hung something. Fairy lights dangle across coving, shells adorn mirrors, the ceiling has an array of chandeliers, plus intriguingly, a mirror ball; all a bit much for the breakfast room of a pension. The breakfast is a bit random as well. Cottage cheese and eggs sit alongside strange looking jams. And there’s a definite game of hide and seek going on. We choose coffee with our breakfast so the owner places the orange juice out of reach behind the bar. I ask for milk for the kids’ cereal. “Most people have yoghurt with their muesli,” she replies, eating her own cereal in the corner.

This morning our children are in a relatively low key. Hannah has a wobbly tooth and for days she’s been asking for an apple for breakfast to help it fall out. Now she has finally got one. She sits and stares at the rosy apple, the only item on her plate. She hasn’t lost a tooth before, and while she’s desperate for the tooth fairy to bring her a Euro, the sudden thought of an apple ripping her baby tooth from her mouth is now something of an issue. Cameron meanwhile, sits in front of his bowl of muesli, wondering how he’s going to get it down his throat without resorting to the yogurt option. Matthew’s plate is now empty. He has finished his roll and is wary about approaching a buffet table that has cottage cheese on it.

We checked into this guest house in the city of Passau so we’d be on site to visit St Stephan’s Cathedral. Every day at noon there is an organ concert played on the ‘largest cathedral organ in the world.’ And with two keyboard players in our family this couldn’t be missed. 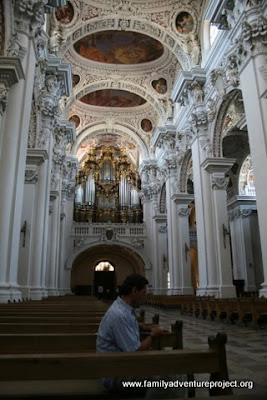 In the evening we went for a walk and discovered that it wasn’t just our bed and breakfast that had an air of eclecticism. The Italian style Altstadt of Passau is a network of dark alleys and passages, filled with funny little antique and junk shops. The kids are particularly impressed by the head of a polar bear that stares out from under a lamp stand. It would fit in well in our Pension. At the edge of the city three rivers converge, another example of the way this city mixes things up.

We are hoping the owner of the pension would store our bikes until midday so we can go unloaded to the concert. But she immediately clears up any potential misunderstanding. “I shut at 10, so you can’t leave your bikes here. But she does approve of the organ concert. “I saw the Three Tenors in the open air once. Only the cost of ten beers,” she says, her conversation as random as her décor.

We stand on her doorstep adding our bags to the bikes. “Your children are very good,” says the landlady . German children would never cycle without “Wha wha wha!” She imitates a child crying. “And the Spanish. They are horrible. The children dip their hands in Nutella and slap them onto the walls.” She shows me this effect against her pension outside wall. “When my own children were little I used to say; children they are like a plaster you put on a scab. But with children they are stuck to you for life.” 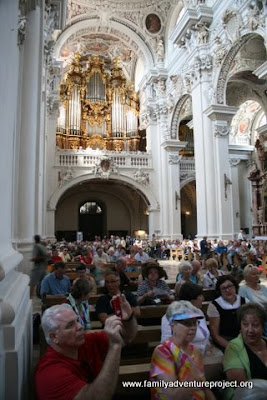 We are early for the concert and have coffee in the imaginative Café Stephan am Dom . It’s almost as baroque as the church, with silver thrones and pink velvet seats with handcuff style decorations on the back of them and silver studs around the seats. 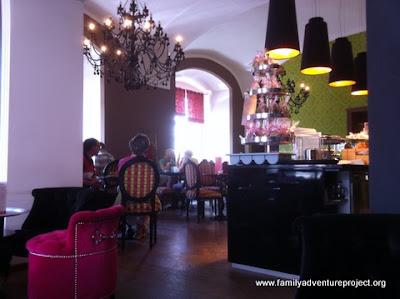 As the boys tuck into an enormous ice cream I hope none of it will end up flecking the velvet flock wallpaper. Meanwhile Hannah orders a large slice of strawberry cake and hopes the fruit will dislodge her tooth. 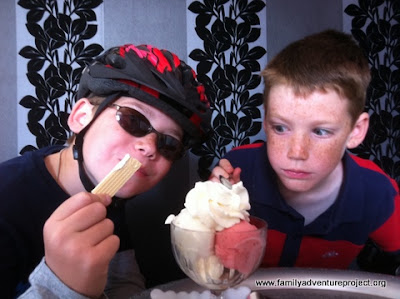 There are 17,974 pipes controlled by 230 stops in the ‘largest organ in the world,’ which is actually five pipe organs played from one manual. St Stephan’s Cathedral is the largest baroque church north of the Alps and this many pipes are needed to compensate for its enormous size. 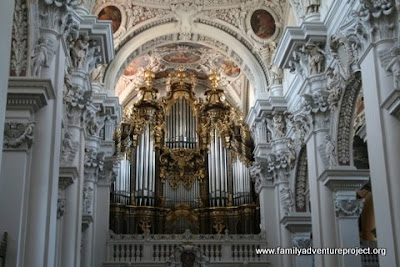 When the concert begins an imposing opening prelude by Bach is followed by a lighter Air that seems to dance around the the Cathedral on the five different sets of pipes. Then the Dom is filled with the jarring tones of a turn of the century piece by Reger after which the organist shows off the instrument and his skills with a little freestyle improvisation, before pulling out all the stops with a big German Bach finale. Stuart is following this eclectic body of music. Cameron is pretending he is playing the keys, tapping his fingertips quietly on the lady in front. Matthew is quietly playing something too, but it’s not music; he’s trying to ‘find The Stig’ on his iPod. Hannah is still wobbling her tooth. And I’m looking at all the cherubs and sculptures and pictures and fresco’s in this classical baroque cathedral and thinking it’s not so different from last night’s bedroom. 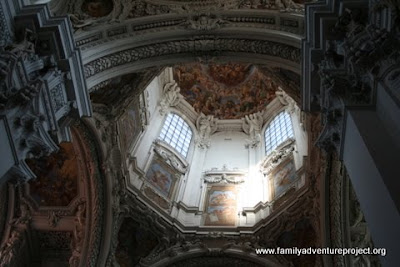