Cycle tourism is big in the Tauber Valley and the neighbouring Main Valley, thanks to local clubs and a transport system that supports bike.  But one of the best developments is a Car Free Sunday in the Tauber Valley which takes place the second Sunday in August each year. The valley road is closed to traffic and only by bicycles and inline skaters are permitted to get out on their wheels. Special trains operate with discounted tickets and the local villages get involved. We paid a visit with our bikes..

“You are from Manchester, England?”

“Well, not exactly Manchester, but..”

“I have trousers I call Manchester.”

“Oh. Right.” Stuart has told me all about the traditional Bavarian trousers; -long leather shorts that they go walking in. Now I feel more on top of the conversation. “You mean like Lederhosen?”

There is a seconds silence while he looks at me aghast. “Lederhosen? No! Cord. Manufactured in Manchester.”

After this gaffe, I need to steer the conversation back to cycling. “This is a very good Festival. Who puts on all this lovely food in each village?” 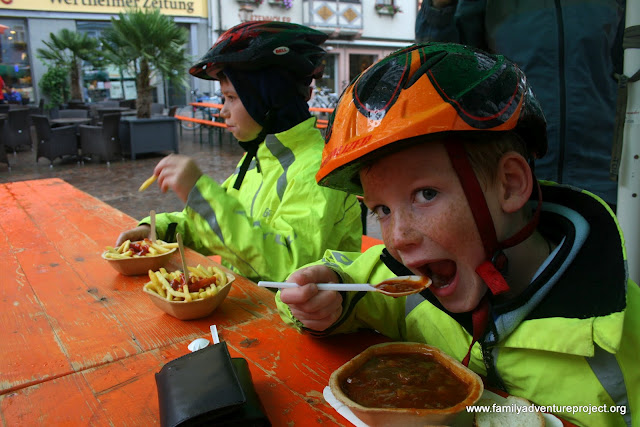 The food for Car Free Sunday is organised by local clubs

“In this village it’s the singing club and the motorcycle club. You like the cake?” my companion asks proudly? I look at the stocky young man with a slight smattering of stubble and conclude he must be there to represent the latter.

“But I don’t sing,” he adds, in case I were to misunderstand him once again.

The Tauber Valley is in the state of Baden-Württemberg in southern Germany. Like many German regions, they’ve thought about how cyclists can get around.  Between March and October The Main Valley Railway and the single track Tauber Valley Railway have special carriages for bicycle transportation. But ‘auto freier sonntag’ day is special. In every one of eight villages and the long valley road that connects them all, cars are banned. Cyclists and skaters take over the road, pedalling and scooting between villages offering every type of cake, beer, coffee and sausage you can buy with a euro or two. It’s a party atmosphere. And we needed a party atmosphere to lighten our mood. 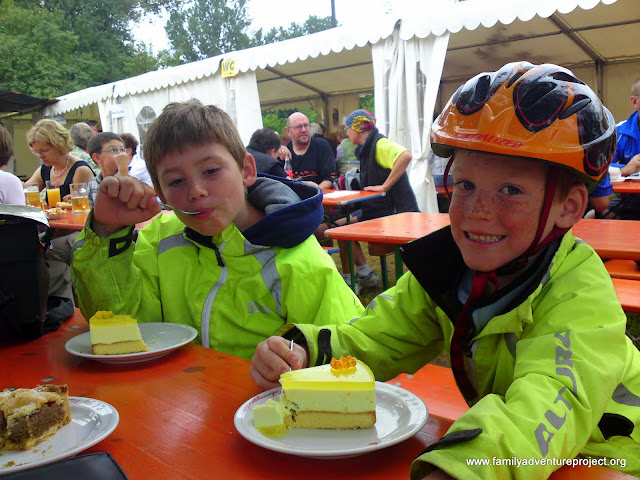 Food features highly in this festival of cycling.. cakes to match your jackets anyone?

A wet start to a perfect traffic free day

Our first day on Germany’s romantic road didn’t start well as we pulled down a drenched tent and attempted to stuff the weighty mass of canvas and water into a bag. But while the day had begun badly for us, it was still on course for the kids. The night before, in 40 degrees of heat we promised them a morning at the open air swimming pool next door. They danced about in the rain on the open air chessboard, charging around as queens and knights, dreaming of water slides and water pistol fights, while all the campervans made for home; disappointed by the weather.

Unsurprisingly, we were the only people in the pool, but for a change we were in the majority on the road. We soon cheered up as grannies, toddlers and even dogs under umbrella’s were pedalled or pedalled themselves past us on the hills. Up to thirty thousand people apparently. The festival happens here every other year and is very popular. People read about it in the papers and come from miles around. At 6pm, it’s all over; the barriers are lifted by teams of stewards, and it’s something of a shock when cars push past you on the road once again.

“Quickly, pedal quicker,” Matthew hurries me along, as the first car revs up behind me.

And it doesn’t. But it was better by bike, and only bike. What luck for a family of cyclists to stumble across a day just for us. 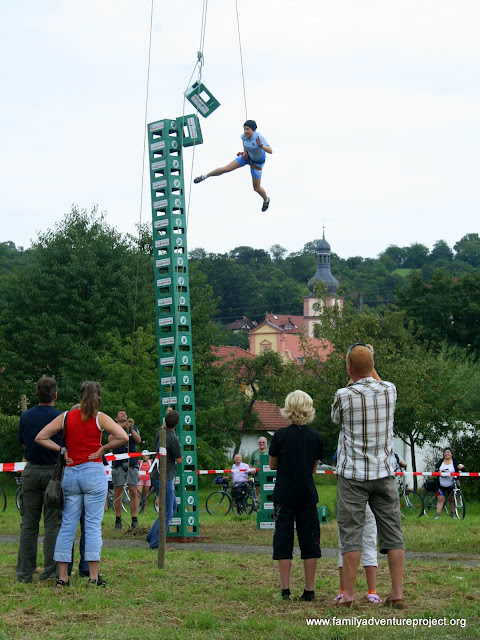 All manner of fun and games on traffic free Sunday