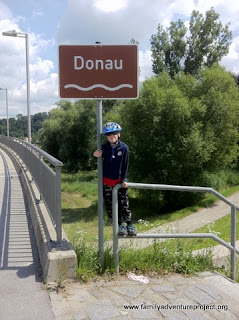 “If that’s the Danube,”‘ said Cameron staring up at the ‘Donau’ sign that I assumed  was confusing him,”then why isn’t it blue?”

I have to admit the muddy swirling water beneath was not exactly the sparkling blue river of my dreams either. It seemed everyone was a little disappointed.

“Is that really the Danube?” asked Hannah, still unconvinced. “because I can’t see any music or people dancing.”. With the greyness of the day it wasn’t a view to inspire music or anything to dance about.  “And you said there would be music in that Blue Danube Waltz Dad”

Which indeed I had. What I obviously hadn’t made clear was that we were supposed to be making the music. On our recorders. And believe me, even on that grey day, the Danube was a better place without music.

With a four part Blue Danube arrangement I figured the best place to start was to learn the melody, all together, before starting to get clever with separate parts. So that at least we would all be on the same hymn sheet. But practice had not gone as well as we hoped. And the tune was too challenging for some of us to even begin. And as you’ll see from this video of us trying to pick out the tune in a hotel room on the way to the Danube, getting the melody let alone some harmony is more of a challenge than you might think.

As we started off along the Donauradweg, I felt relieved we had two or three weeks riding along the river to refine  our playing. While we were ready to cycle the Danube we were far from ready to unleash our waltz upon it.