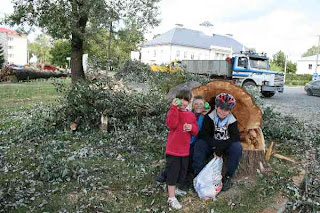 “I’m cooking like a turkey on Christmas day,” I muttered, looking in vain for any scrap of shade on this scrubby land at the side of the road. “I’m a hot chicken too, Mummy,” whined Hannah, burying her head into my leg. Meanwhile Cameron pushed his entire body under the buggy in an effort to find some shade for himself. It wasn’t even but it was over thirty degrees as the heat wave in was showing no signs of abating and no respect for international borders. Pedalling gave us some breeze, but when we just discovered Matthew had left his helmet at a supermarket six kilometres away, he and Stuart set out to retrieve it. and Hannah and I were stuck by the side of the road for a while.  It felt strange to be just three, after being five for so long. “We need a hotel tonight,” I decided, as I wiped sweat from my head. “With air conditioning.”

At Tourist Information in ; ‘s second biggest city, the officer recommended two hotels that provided good yet affordable family rooms. She clearly took her job seriously as an officer for the City of . I asked her to phone the first to check price. In the publicity this one was billed as an established hotel near the river. “It’s 86 Euro’s,” she said, passing me a brochure, and moving on to another customer. “Wait, I’d like you to phone the other one as well,” I pleaded. Her conversation with the second hotel was very brief. “It is about the same price,” she said, when she finished on the phone. “I won’t book it for you because you would have to pay me 15 Kroons. Just go along there if you want a room.”

The Dorpat Spa hotel was one of the city’s newest, a huge building with over a hundred bedrooms, set on the river. At the desk, I informed the receptionist we’d like the room that Tourist Information had phoned about; the family room. After ten minutes of form filling, we were in a position to take the key. “But I need to inform you there is no air conditioning,” she said. rarely gets these kids of temperatures, so air conditioning is unusual for hotels here. But it was so hot, and the other hotel we were offered had air conditioning. Out I went to tell the others. We decided we would take the room anyway; the weather was due to break that evening. Back in I went, remembering at the last moment to confirm the price. It was much higher than I had been told. We couldn’t afford it. As I gathered up my passport and credit card she must have caught sight of the bikes, and the sweating, dishevelled children. “I will give you a discount because there is no air conditioning in the room,”she said.  Then she looked at me again. “And another discountbecauseit is very hot. It is now 86 Euro’s.”

The family room was actually a family suite. A spacious corner suite overlooked the river, with panoramic windows, and huge plasma screen TV, a bath, his and hers sinks and all the coffee making perks that the don’t generally indulge in. A massive king size bed was accompanied by little beds with crisp white sheets. We pulled back the curtains to reveal two curved walls of windows. Now all we needed was food. From our gigantic bedroom windows we spotted a McDonalds below. The kids were overjoyed.

Three happy meals later and we had three happy children. We were happier too, bathing in the cool air conditioned air. But the sky wasn’t happy. It was dark and fierce, giving the impression that night had already fallen. Then something caught my eye, it was a road sign careering down the street. It was followed by a swell; a massive scary looking swell that was heading straight towards the restaurant. Were we messing with a McFlurry as a hurricane blasted towards us? “Oh Mum, it’s weird out there,” said Cameron, who had caught sight of the situation. The McDonalds steel umbrella stands began to leer towards the windows, and metal chairs started to fly around like Mary Poppins had popped by to tidy up.  The swell that was making its way down the street burst into the junction; it was not the eye of a storm but a massive cloud of dust that had been carried down the high street. Now dust was everywhere and the wind was trying to fly people around too as they attempted to head for shelter. The rain followed, drenching anyone still brave enough to be out. Thunder and lightening flashed and suddenly we were in the middle of an electric storm. It occurred to each of us that if we had camped, our tent would have stood no chance.

Everything was calm in our family suite. The children went to sleep immediately and there was no hum of air conditioning to spoil the slumbering silence; or the extraordinary show from our panoramic windows. From our high position, we could see miles of countryside, lit up like silver as the sky was torn apart by bolts of lightening. As the lightening came from so many places, it seemed there were simultaneous storms at every part of the compass.

The following morning, the city showed few sighs of the storm. Just twigs and branches scattered around, a few road signs where they shouldn’t be. But the countryside was ravaged. It took a while for us to realise the extent of the destruction. Villages left without electricity, local shops closed. Electricity and telecommunication cables lining the grass at the side of houses. And hundreds and hundreds of trees, uprooted and felled, snapped in the middle like twigs or leaning at a perilous angle in their dozens. “It’s domino valley,” said Matthew in awe, as we cycled past endless trucks heading out to assess the damage.  At a small village, we stood in front of an ancient church. Despite its longevity the side of it had crumbled in the destruction. A local cyclist stood with us. “Everyone in the village is frightened because there is no electricity. And my phonestill can’t get a signal.” He took out his mobile and gave it a shake. “They’re saying that this was possibly the biggest storm has ever seen.” Once again I said a quiet thank you that we had decided not to camp that night. It seemed there was a reason I was cooking like a turkey earlier on that day, which left me with an unshakable desire for air conditioning. And the reason wasn’t Christmas.