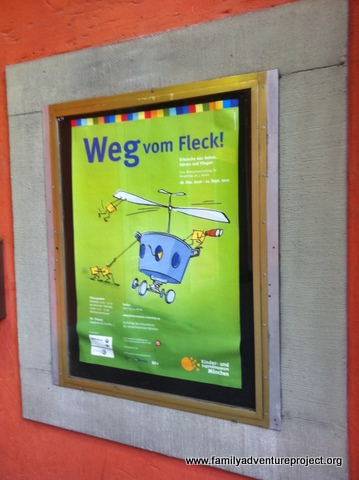 Weg vom Fleck is all about going places

Munich’s Kinder und Jugendmuseum gives children their own transport. Not only do the little people have total freedom to play, explore, touch and investigate; they also have tiny chairs with wheels on. Adults are at a disadvantage here, plodding about on two clumsy feet as people less than half their size efficiently whizz by on straight backed wooden chairs. Some of them are dressed as Nasa engineers, others as explorers. It’s like being in a bizarre, highly charged office. You need to watch your back. And your ankles. 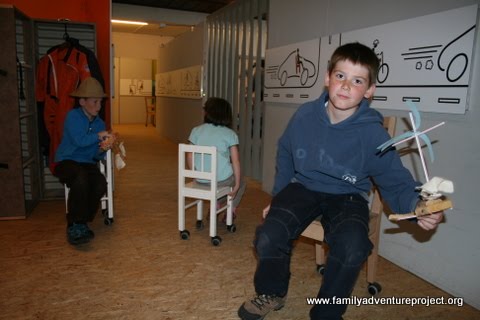 Why don’t we use wheely chairs to get around everywhere?

A museum for children and young people

The Munich ‘children and young persons’’ museum takes a different theme twice yearly but the philosophy is always the same; “You have to touch and try everything,” says our guide Silke Schuster, explaining the concept to our children. “It’s the way things work here. It’s the way you learn things. You try it out, and if it doesn’t work you change something.”

Appropriately for us, the current exhibition Weg Vom Fleck! (on until November 2011) is all about movement. “How did you come to Munich?” asks Silke as she tells us what we can do here. I am tempted to launch into a diatribe about the train from Amsterdam, but keep my mouth shut. “How do you get from one place to another?” she asks. “There are many different ways of getting away from where you stay.” Not if you’re on a tandem. 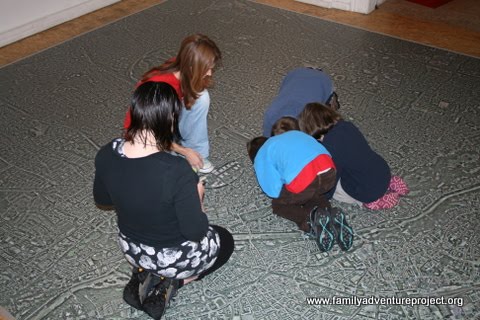 Silke points to the carpet we are standing on. And for the first time we notice it is an ariel view of the city. This exhibit is all about orientation. “To know where to go, you have to know where you are.” So true. And so often in our case we don’t. But today Matthew does. He immediately points out the museum, integrated into the building of Munich station. “I think I’ve found our hotel,” he cries. He draws a line with his finger straight to the Café am Beethovenplatz and adjoining Pension Mariandl. Silke is visibly impressed. He didn’t even use the little magnifying glasses they provide. What he doesn’t admit is that only minutes ago, back at the hotel, he used his i-pod “Where am I?” app to pinpoint the location of his dad’s i-phone. It displayed a similar ariel view.

“A wheely office chair!” shouts Cameron, grabbing one of the little farmhouse style wooden chairs and swirling himself around the foyer. True to type Matt makes his way through the room where paper rockets are shooting up into the ceiling, straight to the cycling exhibit. He gets to work on the brakes and wheels. Meanwhile Cameron takes the wheel of a tram. Without a second thought, Hannah and I are off to the section about shoes. We have heard you can make your own. On the way in to the city earlier, we passed the posh shops on Maximillianstrasse; the Jimmy Choo heels stamping their authority on the exclusive international boutiques. I am hoping someone might show me how to construct a pair of those. The workshop has already begun when we arrive, so we settle for trying some shoes on. Not quite Jimmy Choo; they are more the flip flop variety of footwear, but there is a vast selection and choice. Some budding designers have even managed to combine flip flops and heels. 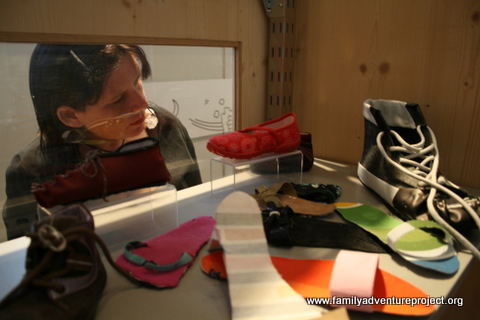 Of course for the girls, the shoe shopping was the most interesting

The two Lufthansa seats next to the contents of a container ship are very popular. Hannah and I sit down in them and buckle up. A small queue forms in front of us. But I think it’s less about the novelty of sitting in an airline seat, and more a chance for an adult to stay out of the line of fire of the oncoming wheely chairs. In the next room the museum takes it all up a notch; giving us the combination of wheely chairs and water. Some of the children look like they’ve never had so much fun in their lives. “Whheeeeee!” shouts Cameron as he deftly navigates his way around a large pile of orange crates and a weighing machine at 10mph. 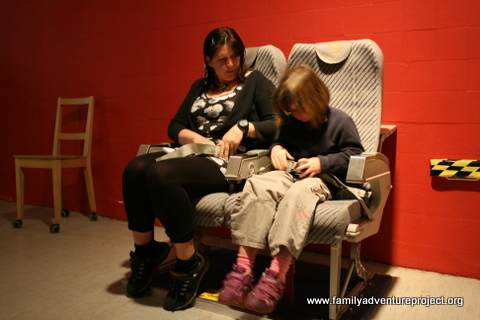 Hands on a plenty, including boat building

The kids are invited to build a boat, out of wood, lolly sticks, elastic bands and nails and other bits and pieces. The museum has provided small hammers and screwing implements and it’s a hive of noise, industry and near misses. Our kids immediately take up the challenge. Matthew’s boat is a floating palace of cork and lolly stick. Cameron makes full use of wind power; two well placed sails taking the strain. Hannah’s is mostly a collection of elastic bands wrapped around a lolly stick. The other kids try their boats in a tub of water then abandon them and go off to make windmills and paper planes. We, on the other hand, are going places with ours. We resolve to float them on the Isar or the Danube, and see if they arrive at their destination before we do. Although we’re not entirely sure of our destination. Or how we are going to get there. Perhaps we need to go back and look more closely at the carpet of Munich… 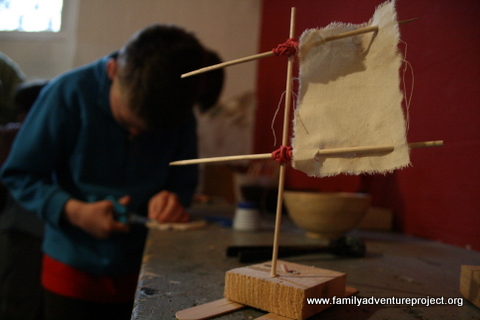 Disclosure note: Thanks to the Kinder- und Jugendmuseum who provided us with admission tickets to allow us to bring you this story.