It all started with a crisp

It was a long wet ride from Valmiera to Valka, our last road in Latvia. The road itself looked much the same as the one we entered Latvia on, a black and white scratch through thick green forest, but I felt differently about it now compared to the night we entered the country two weeks earlier. The horse-flies were fewer and less prone to biting, or perhaps I’d just grown accustomed to them. And the road seemed smoother and easier to ride on, or maybe I’d just got better at dodging pot-holes.

Cycling in the Baltics

“I need to stop for a sandwich,” called Kirstie from behind, just 5km out of Valca, the Latvian half of the split personality town that straddles the border with. I wanted to push on but I know there`s little point when the team is out of fuel. When hunger strikes, the pace drops and everything takes longer. Besides we were in no hurry to leave, not any more.

At a bus-stop ahead, an old woman stood sheltering from the showers, umbrella in hand, waiting for a bus to town. As we pulled in she started talking at me in Latvian, lots of Latvian, gesticulating at the kids, flags and trailers filling her bus-stop. Sadly, my Latvian still didn’t extend beyond please (ludzu) and thank you (paldies) so I tried a little mime to show we were only stopping for something to eat. She seemed to understand as much of my mime as I did her Latvian but as Cameron and Hannah got off the triplet her hard stare softened to a little smile and I assumed we’d reached some kind of understanding about sharing the bus-stop, at least for a short while. She retreated to two small plastic bags she’d left on the floor and I went to the trailer to get something for the kids to eat. 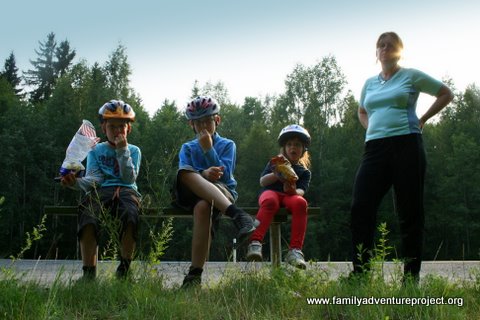 It all started with a crisp…

The curry flavoured crisps were a treat. We bought them in one of the posh supermarkets in Riga as we hadn’t seen anything so like home elsewhere. We’d been saving them for a treat and the prospect of leaving Latvia seemed appropriate. Once the kids had grabbed a few I offered the packet to the lady in the spirit of bus-stop sharing.  She reached in with berry stained fingers and took a few. “Paldies,” she said, her smile returning. “Ludzu,” I replied, pleased with the developing rapport.

A moment or two of mutual crunching passed as the kids ran around the bus-stop and Kirstie made pate sandwiches. The lady finished her curry crisps and started rummaging in her bags.

“Do you think she has tomatoes in there?” asked Cameron recalling his last encounter with an old Latvian lady.

But she returned instead with a handful of bright red, blue and purple berries and a small mustard yellow mushroom.

A gift from berry stained fingers

She poured the freshly foraged berries into my hands and I looked at them and wondered if they were safe to eat.

“I think those blue ones are blueberries though,” said Matt, ever keen to get one over on his brother.

“Are they ok to eat?’ I mimed. The lady appeared to say yes so I popped a blue one in my mouth and prayed it was not a recipe for indigestion or worse.

“Paldies,” I said with a smile.

“Ludzu,” she replied, handing over the mushroom then returning to her bags.

By the time the woman returned with a few more berries Kirstie had finished making her pate sandwich and offered her one. It must have been obvious that freshly made did not mean fresh as the sandwich was declined but the rummaging in the bag began again. 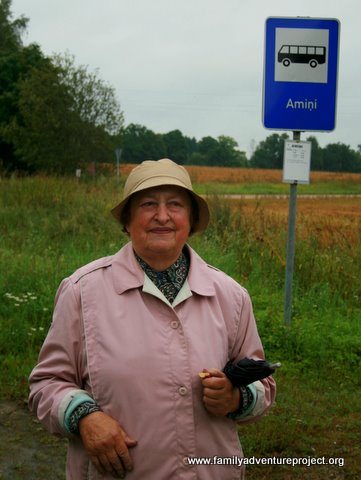 There’s nothing unusual about sharing a bus stop

From berries to garlic

A moment later the woman thrust a small fresh garlic towards me, pointing to the kids, pedalling her hands around and miming that they should eat it.

“Ludzu,” she said pushing the garlic into my hand.

“Paldies,” I said as gratefully as I could. “Here you go boys,” I translated, “The lady says eating this will make you pedal faster.”

But they were nowhere to be seen. And nor was Kirstie.

While I stood with the garlic, Kirstie busied herself in the trailer, returning to the scene determined the lady’s hospitality should be returned.

“Here, something for you,” she began, pushing an old apple into the lady’s hand. “And this, something special, from England,” she explained offering up a School Bar fruit stick we’d been carrying since we left Harwich.

There wasn’t really any other option.

Latvia Bikes in the Rain

An escalating exchange of food

Cameron was quicker, “I think she’s getting something else Dad.”

And then it arrived. A small tin with a picture of a fish and some vegetables on it, accompanied with a mime of a scene from Masterchef.

“Is it fish?” mimed Cameron. The lady shook her head and chattered away excitedly in Latvian. Tuna pate? Vegetable stew? No? The lady stirred a big pot and tasted with a spoon.

There was nothing in our picnic bag to top that.

“Ludzu,” said the lady, thumping her heart with her hand.

“Fish soup to make your heart strong,” I explained to the kids. They looked disgusted.

One last thing for us

Then with renewed urgency, perhaps sensing her bus was due, the lady mimed for a pen and paper. Kirstie fetched one from the bike and the lady began scribbling. She wrote a name, “Valentina,” pointing to herself, then an address and a phone number.

“Riga iela,” she said repeatedly, “Valka. Valka.” Then pointed to us, mimed sleep, put her hand back on her heart and passed the pen and paper to me.

I had no idea whether it was an invitation to sleep at her place, the address of a guest house or a request for a post-card but it was too complicated to try and find out with the bus due so instead I took the pen, beat my heart in return, pointed at her and wrote our name, address and phone number down. She smiled, clearly touched by the encounter, took the scrap of paper and clutched it in her hand.

As we shook berry stained hands to set off for the border I felt somehow she was saying goodbye for Latvia, a country whose people, beauty and history have left a berry stain in our hearts.