As one of the shipping hubs of Britain in the last century or so, and home of the mighty Cunard, Liverpool has many connections with Titanic. As the 100th anniversary nears, scouser memories, memorabilia and moments on the disaster are brought together in the Merseyside Maritime Museum. It is a bit of a ‘must see’ for us, as we start our Titanic Tour…

The Kids make the Headlines

On every page, with every stroke of the pen, the biggest ship in the world disintegrates in a rainbow of colour. Funnels topple. Tiny lifeboats go down along with the giant hull. Icebergs flash across damaged decks.

The Merseyside Maritime Museum has plenty of paintings by famous and not so famous artists. But the art we’re focussing on today is by the kids visiting the museum. Kids like a disaster. They love to trash toy cars, demolish Lego buildings and set their trains on course for collision. So it’s not surprising they relish bringing to life the part of the story where the ship sinks.

The Titanic memorial is undergoing restoration for the anniversary

Today they are joining in the commemorations in the run up to the 100th anniversary with their own take on the tragedy. They are creating the front page of a Merseyside newspaper for 16th April 1912; the day after the mighty ship went down. My own kids join in; jostling for pens in the packed workshop.

The headlines are predictable. TITANIC SINKS. 1517 DEAD. But what’s less predictable are the angles they take on the story and the way they depict them. Their cartoon like characters and wonky speech bubbles provoke as much thought as the single ticket that still exists for that fateful night on a much triumphed but ultimately doomed ship.

Four identical faces in a line shout a simple “HELP!” – their charcoal button eyes appealing for help that will never come. 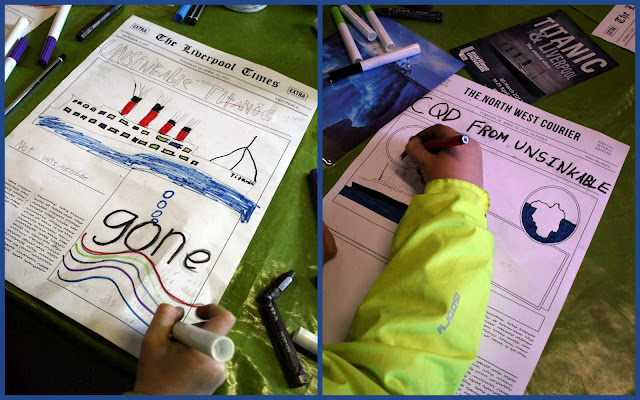 A series of women having a bad hair day bang on a door in New York and demand an explanation from White Star Lines.

The word ‘GONE’ sinks to the bottom of the sea, sending a stream of bubbles in its wake.

Let the kids interpret the story

Workshop Leader Chris Rodenhurst holds each one up as it is finished, reading out the headlines and commenting on the pictures. He tells me the workshops have been popular. And as a lecturer in Graphic Art  at Liverpool John Moores University, he’s been amazed at the variety of interpretations of the maiden voyage that ended in so many deaths. “Yesterday I made the mistake of showing the assembled kids a couple of the front pages that other children had put together. They then basically copied, because they thought I wanted that. Since then I haven’t given them any direction at all and their pictures are all dramatically different. They use their imagination in a way that older children don’t.”

He believes school squashes the imagination and the enquiring mind; by the time they get to University he needs to re-teach the students how to think for themselves. He holds up each picture as it is finished, points out what is happening in the scene and praises the good points. At the close of his words there is always a silence from both parents and children, as each absorbs the scenario. It maybe cartoon, but somehow it is still very real. Despite the evidence all around us in the Maritime Museum that disasters regularly happened at sea; there is something about this ship that touches us all.

Further into the museum, a guide is holding up objects connected with Titanic to stimulate thought and debate. He presents his growing audience with replicas of keys and flags, shows them the type of communications the ship would have used, and pretends to steer the wheel. Meanwhile the guide down the corridor tells us that in 20 years the wreck will have been eaten away at the bottom of the sea. By the time my kids have their own children Titanic will just be a story, just a newspaper headline, just a sandy site marking just another tragedy at sea.

Standing on deck I realise this is for real

I’m reminded of the two little cartoon feet thrashing about in the waves later that night as I stand on deck of our overnight ferry. Our Stena Line ferry is a calm and happy little ship. Ploughing across the Irish sea twice a day, it takes passengers and cargo to and from Birkenhead and Belfast in a quiet, unassuming way.

The only Titanic ticket left… Exhibits like this bring the story to life.

There’s no ball gowns or finest china, no drama and no steerage. There is however, the sea. Always. Dark, omnipresent and vaguely threatening, even on this warm April evening.

No museum has the capability of putting you on the ledge in this way. Perhaps all schoolchildren should be brought to sketch the Titanic disaster at the helm of a ship. I wonder if the £90 million new Titanic museum in Belfast that we’ll be visiting in the morning can deliver this intensity of experience?

Leaving Liverpool on the night ferry, the sea is dark.

I glance at my watch. It’s half past eleven, just ten minutes short of the time of day the now legendary iceberg struck its’ casual yet fatal blow. In my head the alarm bells sound and the tiny boats launch. But still the cartoon feet kick and wave, and ultimately sink into the very real depths of a cold, unfeeling sea.

History might have clocked up another 100 years of cruising disasters, and graphic design might now have become a university subject, but even the cartoon version of the story can only ever end badly. However creative you get with the headlines, Titanic is always gone by the time that morning breaks.

The Merseyside Maritime Museum is situated in the Albert Dock in Liverpool. The museum has a special Titanic and Liverpool: The Untold Story exhibition on until 21st April 2013. Opening hours are 10 – 5pm and entrance is free (donations welcome).

Stena Line sail from Liverpool Birkenhead to Belfast twice daily at 10.30 and 22.30 hours. Economy foot fares start at as little as £30 single or by car from £79 single. Cabins are available for overnight crossings for a small supplement and there’s a Stena Plus lounge if you fancy a taste of luxury.

This post is part of our Tales of Titanic Cities Tour.

We’ visited Liverpool and Belfast to find out more about how the two cities are connected to Titanic, joined in the Titanic Festival and tried to  figure out what the story of the Titanic has to teach us one hundred years on.

Read these other posts from our Titanic Season.

Disclosure Note: Thanks to Stena Line UK for their support for our Titanic seasons which has helped us to bring you this story.