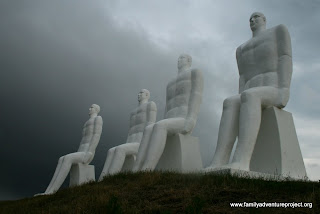 Never mind the storm brewing, and the fact we were on bikes, or that this would obviously take us in the wrong direction when we were supposed to be starting a journey; once I’d spotted these pure white giants staring straight at us as our ferry approached Denmark, I knew we’d have to cycle out of our way to visit them.

The sculpture, “Man Meets the Sea”, by Sven Wiig Hansen sits North of Esbjerg. The four identical men, each nine metres tall, have been sitting rigidly greeting visitors arriving in Esbjerg Harbour since 1995. On a clear day they can be seen as far as 10km out to sea. But not this day as swirling tufts of steely grey and charcoal circle these motionless chalky Deities. 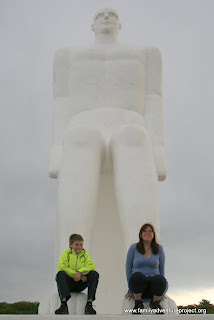 These expressionless figures are 9m tall

Day one and the plan is out the window

We were on day one of a meticulously planned seven week tour to visit the Baltics and were supposed to be heading South for a ferry to Lithuania, but I couldn’t resist throwing the plan out the window to go and meet these concrete titans. I like having a big landmark to signal the beginning or end of a journey. It somehow makes starting or finishing more significant, definite, obvious. It marks the moment and gives pause for thought.

Which is also what today, remembrance day, is all about. Looking at these photos with that in mind, I see a poignant, regimented look. Despite being 9m tall, I imagine they may feel small in the face of an approaching tempest. Yet whatever their feelings deep inside, they remain outwardly focused, disciplined, committed, as they sit together and bravely face whatever comes their way. It’s a kind of courage and discipline I don’t think I have and I’m grateful to those who do and who use it in the service of others. 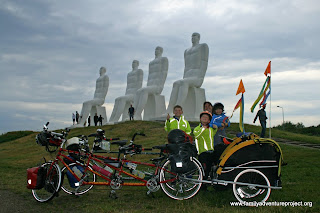 A great way to mark the start of another journey

Feeling small in the face of a challenge

I remember feeling small beneath these Acropolictic figures, facing the sea and the approaching storm, at a place where land meets sea, where man meets nature, and where we started another journey into unfamiliar territory. There was a charged atmosphere; excitement about the journey ahead, the mystery of these expressionless figures, anticipation of a storm about to break. And a nagging doubt that perhaps we shouldn’t have made this detour. But that’s what adventures are made of. Isn’t it?

How do you like to mark the beginnings or ends of your journeys?