“There’s good news and bad news,” said Stuart, popping back into the tent for a moment after unlocking the bikes. “What’s the good news?” asked Matthew. “The good news is there’s a midge party out there,” his Dad replied. “What’s the bad news?” asked Cameron. “The bad news is we’re the buffet,” Stuart said, wrapping a tea towel around his head for protection. “Extra sweeties for anyone who volunteers to be on tent duty.” Unusually we were on the bikes before nine. 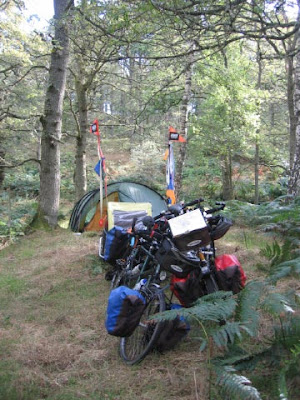 My night time fears of steep gravel track and spinning wheels proved to be unfounded as we cruised down and pedalled up a shingle track with the sun on our backs. Around us the royal purple of the heather and thistles merged into the shady green of the treeless Cairngorms as we cycled up the Drumochter Pass, summitting at just under five hundred metres. The night before a sign had warned all cyclists to beware. No facilities, food or shelter for thirty kilometres. 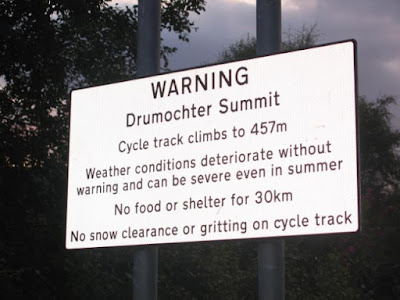 At a lunch stop in the long grass, thankfully midge free, we enjoyed our stockpile of supplies as a couple cycled past on a tandem, a woman at the helm. They were Belgian cyclists Heikki and Sandi, doing a loop of the north of Scotland, and despite shattering part of his knee, Heikki was determined to finish their cycle back to Edinburgh. “I sit on the back so I’m higher up for taking photographs,” he explained pointing out their bike specially made to cater for the unusual dynamics of this touring partnership. “Hey are you the guys who went to New Zealand? I recognise that bike,” he cried suddenly, coming to have a closer look. “You are those guys! I was following you on your website. I can’t believe I’ve met you in real life.” They told us of their plans to take a year out and cycle Australia, if the knee holds up. As we bid them goodbye, an overweight cyclist puffed into view, his face covered in white cream, like a ghost on a bike. “These hills are awful aren’t they?” he wailed. “And I think it’s another five miles to Dalwhinnie. Oh God.” He puffed on as we gathered up the picnic bag and Heikki limped onto the stoker’s seat of his tandem. 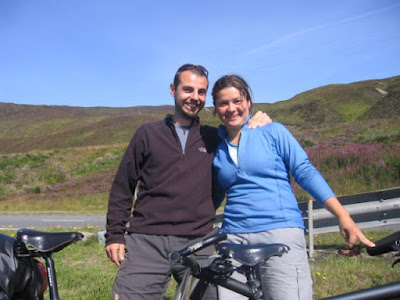 At the entrance to the settlement of Dalwhinnie there was a huge sign. “Dalwhinnie- eat drink and relax.” But I watched in horror as Stuart flew past the café advertising ‘open all hours.’ I was desperate for caffeine and there appeared to be few other houses in this tiny place. We came to the end of the village. “Oh,” said Stuart. “When it said eat drink and relax I assumed there’d be a parade of cafes and bars to choose from. “ For once we went against our principles and cycled back up the hill. But as we entered the café bar we knew immediately it wasn’t a good choice for us; expensive and full of businessmen having lunch. So we made a quick exit and spread our picnic out under a tree while I found a garage to source some coffee. At the garage the puffing cyclist was still huffing around, complaining to the assistant about the terrain in her vicinity. I wondered if his face paint, now streaked with sweat, might melt into his hot drink.

It would have been a relaxing picnic under the shady tree, had we not lost Cameron. At first I wasn’t too worried; he was sure to be pottering nearby. But when I called him, there was no reply. Five minutes later and I was frantic. I’d been over to the river, through the restaurant twice, and back over to the garage, but there was no sign of our five year old and it wasn’t like him to wander off. Soon I had Stuart running around the perimeter of the hotel and its grounds, and the restaurant staff scouring the river bank, and double checking all the toilets. As I ran outside the restaurant for the third time, my heart banging, I noticed the town sign, ‘Dalwhinnie, twinned with Las Vegas.’ Someone here had a sense of humour. Then, “Kirstie, stop. He’s here,” called Stuart, pointing towards the bikes. There, under the shade of the buggy, lay Cameron, rolled up into a ball, fast asleep with his helmet still attached to his head, and his nose pushed into the grass. We gently woke him and gathered together our stuff and our family. While I figured it was probably the most exciting incident to happen in this Las Vegas for a while, I could tell from Stuart’s face he was feeling the same mixture of relief and guilt as I was. Cameron was only doing what we’d all like to do, given the chance, and a sleep under a tree would be good for us all. But had we been pushing the children too hard? In six weeks of riding we’d only had one rest day, and we were all more tired than we recognised, with no hope of another day off if we were to get to John O Groats on schedule.

“Right guys, we’ve been into town and we’ve got to go to the Waltzing Waters, it’s ‘the most spectacular display of water and light in the world’. We’ll have to visit in the morning,” said Stuart excitedly after he’d taken Matthew off for an evening exploration while the rest of us relaxed in the tent, after having had a brief conversatioon with puffing man who’d reached the campsite before us. His face was now just speckled with flecks of white, some of which had lodged themselves in his beard. It now looked like he’d merely been painting his flat for the day, rather than taking on a mammoth climb. Having stayed in Aladdins Palace Hotel which looked out on the famous fountain display in Las Vegas I was sceptical of Stuart’s claim that this small Scottish Village in the Highlands would provide the world’s leading water entertainment. But nevertheless we reached ‘Waltazing Waters’ as soon as it opened for the day. 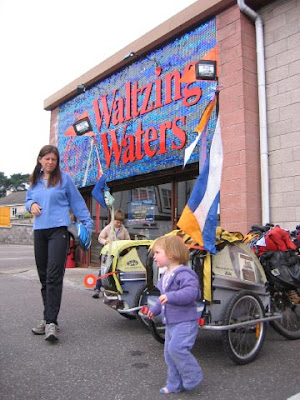 As we entered the auditorium having handed over a large portion of the day’s budget, the smell of damp reminded me of our cellar. Inside the small auditorium four other people took their seats in front of a stage area empty but for a few sparse arrangements of white plastic flowers and pebbles. As the lights went down, the tinny speakers on the walls blasted out some classical music, and the fountains started. Swish, sway, spurt and splat, they threw their towers of water into the air, to a background of coloured lights and triumphant band music. Swirl, swash, splat, spit, the kids sat, entranced for about three minutes, before realising this was all they were going to get in the way of entertainment. For the next forty five minutes we were assaulted with a Celine Dion montage, a Disney arrangment, a collection of Beatles music and a selection of scottish songs, as well as bright green and red light and the swoosh spash of the fountains. I struggled to keep a straight face and not look Stuart in the eye, but when the recorded voice over started to read poetry that visitors had composed about the experience, I lost it. With my head in my knees I struggled to compose myself and control the laughter that was threatening to be louder than the poetry of ‘water lighter than Angels Wings.’ When the swishing of angels wings finally stopped, and we escaped into morning light, I looked around for the ghostly presence of puffing man but he had gone. Processing this unexpectedly Vegas Experience, we cycled on North towards Inverness.