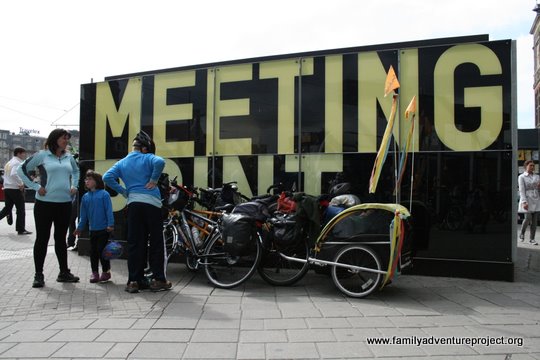 All set for the night train outside at Amsterdam Centraal Station

We unhook the luggage from the bikes and lug them up a set of stairs in the tail end of the rush hour at Amsterdam Centraal station. Platform 7b is several hundred metres long. We stand knee deep in baggage and bikes as a family from Amsterdam casually wheel fully loaded bikes past us. I ask them how they pulled that off.

“We took the lift,” the father replies.

He shrugs, telling us he often takes his tandem in the lift. This family are also beginning a tour, from Prague to Vienna; their first cycle tour since their children were born. As their kids are now 14 and 16, they figure they’ve waited long enough. The middle-aged man, with a fountain of grey curly hair, introduces a 14 year old look-alike with a marginally smaller trickle of curls. The boy nods curtly in time with his i-pod. I ask why they aren’t unpacking their bikes?

“So we can get the luggage to the train,” the Dutchman says. 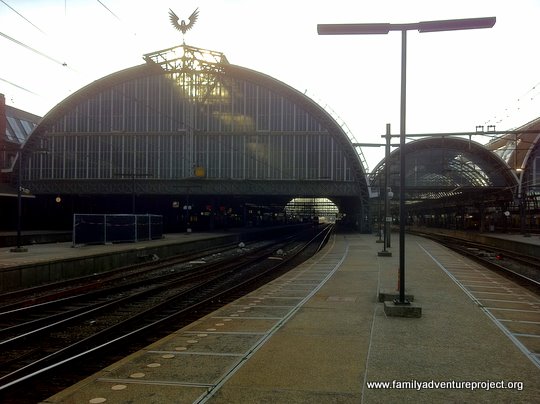 Amsterdam Station, the calm before the storm

The train blasts in to platform 7b, an endless chain of carriages, some bound for Zurich and others for Munich. In response, suitcases swirl in a figure of eight around tired feet, while keen eyes try to pick out the numbers of bunk beds on the side of rushing carriages.

The doors on the 20.31 to Munich open with a swish and the crowd moves forward as one. The Dutch family with the game plan simply wheel their bikes down the platform and unpack them far into the distance, outside their sleeping carriage. Meanwhile we stay behind to panic. How can we move 20 bags, two tandems, a child’s bike, a collapsed trailer and three children along a platform packed with people and luggage? I wish I was Harry Potter and could ram my trolley into the wall, and find myself in front of the correct carriage of Hogwart’s Express. 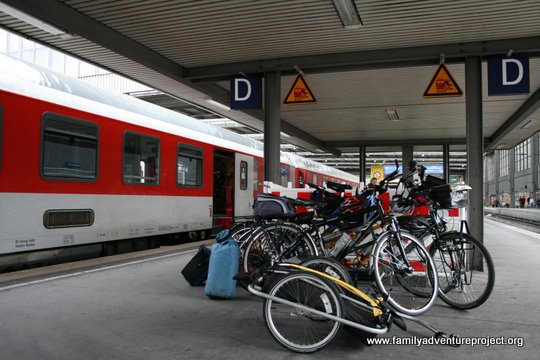 All packed up and ready to load, but not at this end of the train!

We’re in the wrong place

But there’s no magic solution. Stuart, Matthew and I struggle through the crowds with the tandems and bikes, leaving Hannah and Cameron at the other end of the platform with the luggage. We hope no one will steal either bags or children while we are gone. It seems like hours later that we reach the van where the bicycles are to be stored. Stuart immediately doubles back for the kids and luggage, while Matthew and I start to panic again. I drop the tandem and block the platform. We then haul tandems up steep train steps, with a big gap between platform and train.

In the carriage there are lots of numbered spaces for bikes, but we can’t remember which we have been allocated. So Matthew stands with one tandem in the carriage, while I go to retrieve the other. Now I have no way of getting the tandem on the train as its too heavy for one person. Everyone else seems to have boarded, and Matt could be going to Munich (or Zurich) on his own.

Stuart looks like he’s going to have a heart attack

Then, as I attempt to put one wheel on the train, and leave the other on the platform, out of the bank of people comes a heavy, slow moving vehicle. It is red and puffing, and dripping wet, but it’s not a train. It’s Stuart, carrying two huge black holdalls filled with eight panniers; our entire kitchen, clothing, food, technology, camping and medical supplies for the trip. He looks like he’s about to have a heart attack. Running in front of him are Hannah and Cameron. They clamour to get onto the train but I can’t lift Hannah on because I have half a tandem in my arms. 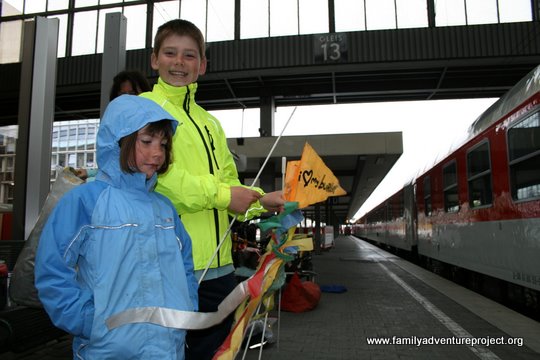 The kids took it all in their stride

Our baggage fills the corridor

Stuart and Matthew negotiate the bicycle carriage, bungy cording anything that moves to the wall, while we throw the luggage on to the sleeping carriage. It fills the corridor and no one can get past. Then we move it into the carriage and it fills two of the bunk beds. As we add the final pieces it threatens to envelope the teenage lad lying on the bottom bunk who has the misfortune to be allocated a bed in our carriage.

The train pulls out before we have even sat down. Its 20.31. And we are on our way to Munich. Or perhaps Zurich…

Just as we are settling down to sleep there is a knock at the door to our carriage. “Are you the owners of the tandems?” asks an English girl who spotted Stuart and Matthew bungying in the cycle carriage, “because I think you have taken the space reserved for my bike.” 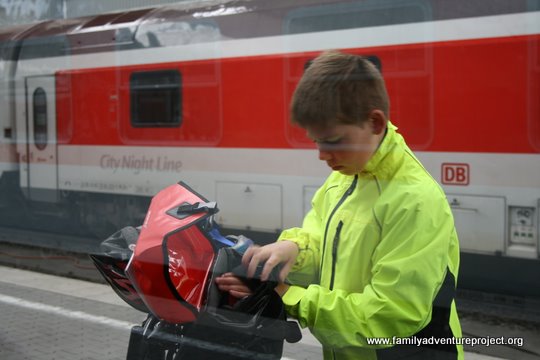 Adjusting the barbag ready for transit