Please sir, can we have a Great Day Out?

Can’t afford a big holiday this year? Want to swap your vacation for a staycation? Gripped by the recessionary spirit and in search of ideas for ways to staycation, visit some local attractions and support the domestic economy, I visited the Great Days Out exhibition in Manchester to pick up some tips for bite-size outings in the North of England…

There’s no need to stomp over the savannah to see wild animals; check out your local safari park or wildlife centre for a face to face chat with some furry friends…

At Brockholes Reserve, near Preston, families are invited to use their senses to track down animals on special holiday workshops run throughout the year. Last summer you could go Gruffalo tracking, perfect if your favourite food is mice ice cream or you fancy trying to spot a warty horrible creature. The reserve, run by the Lancashire Wildlife Trust comes complete with its own floating visitor village.Give them a call to find out about the next Wild Families workshop.

History is just as exciting when it’s in your own back yard; there may even be a chance of discovering some of your own ancestors lurking about. In the UK 2012 is a year of important anniversaries which can make your outing that bit more topical; the Titanic, The Beatles, and of course The Queen of England are all celebrating in 2012…

Liverpool is celebrating 50 years of the Beatles with a year of Fab Four related activity across the city including a series of Philharmonic concerts, a ‘Love Me Do’ weekend and peace vigil.

It’s 100 years since the sinking of RMS Titanic, which is commemorated in both Liverpool and Northern Ireland. March sees the opening of the world’s largest Titanic Visitor Experience, in an impressive maritime building in Belfast.

In Liverpool, 20th-22nd April, you can catch Sea Odyssey; where a Giant Girl takes to the streets. And on 30th March, a new and unsinkable exhibition opens in the Maritime Museum in Liverpool’s Albert Dock. .

At Royal Armouries in Leeds on 7th, 8th and 9th April, knights in armour from around the world will compete in a jousting tournament for the Queen’s Jubilee Trophy. And the knights in armour will also be in action at Easter. Perhaps they might even be tempted by one of the museum’s family fun days. Well, even knights like to have some fun!

Hadrian’s Wall boasts several Roman themed museums, with Vindolanda offering a range of workshops for little centurians during holiday time. From March to June, Carlisle’s Tullie House is going even further back, to work out the truth from the reality when it comes to the Egyptians.

Great theatre, on tour to a city near you…

Did I mention the Queen’s Jubilee? For some historic royalty in a dramatic setting; Anne Boleyn is one to catch. The much lauded theatre production is on tour from Shakespeare’s Globe. Blackpool Grand hosts the only North West dates. 27th -31st March.

We stick with royalty, albeit the Disney variety, for Mickeys Magic Show. You can catch Disney Live at Liverpool Echo Arena 29th Aug-2nd Sept.

Enjoy a good book? There may be some characters lurking in your local vicinity.

To celebrate 200 years of Dickens, you can meet Miss Havisham and all the memorable characters from the master novelists books, in a family event at The Workhouse – one of the Ripon Museums, on 26th April, while later in the summer you can catch some traditional arts and crafts in Ripon during a three day HeArts fest from 30th May. 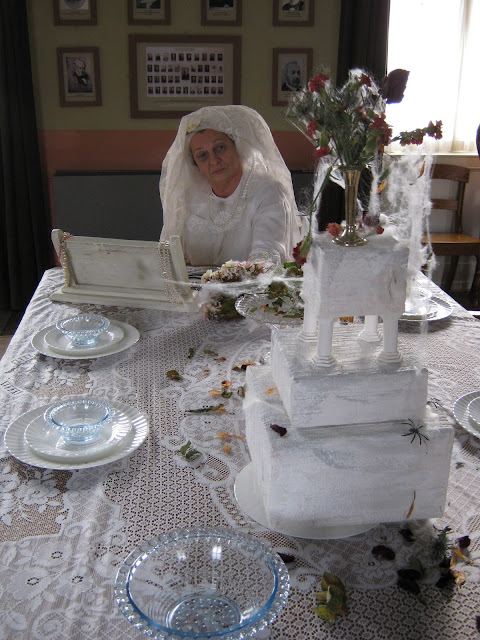 Miss Havisham would like to meet you. Image: Ripon Museums

Meanwhile at The World Of Beatrix Potter attraction in Bowness-on-Windermere, you can follow the trail of Peter Rabbit and Flopsy Bunny in this award winning attraction aimed specially at the little ‘uns. Special events for this year include a family Olympic Relay from 30th June-2nd Sept, where you can collect stamps at several attractions in the Lake District, and there are also quite a few opportunities to have tea with Peter Rabbit.

The BBC in Manchester invites families to step inside their favourite TV shows with new and interactive studio tours aimed at 6-11 year olds. At MediaCityUK, you can find out what goes on behind the scenes of your favourite CBBC programme and have your photos taken with some pretty iconic props.

Meanwhile, Nickelodeon Land celebrates its first birthday in May with a bit of a bash. If you like SpongeBob SquarePants or even have SquarePants yourself, then this is one for you.

Sweet attractions for all budding Willie Wonkas (and their mums).

The North West’s biggest chocolate festival takes over Ramsbottom each Spring. As part of the 2012 deliciousness, the UK’s chocolate champion John Costello created a life-size sculpture of an Olympic Gold Medallist…in choccy of course. So who knows what may happen in 2013?

If you missed the festival there’s no need to miss out on your chocolate though as Cadbury World in Birmingham is open year round for families in need of a chocolate fix. It’s cheap as chocolate too. Visit and find our how chocolate came to be a part of our lives, ride the Cadabra, explore chocolate street, write your name in liquid chocolate and then eat it. Delicious.

7. You can have an adventure in art..

And at Wakefield’s Hepworth gallery, in the first in a series of spring exhibitions explore some of the common concerns of contemporary artists. Four artists look at our relationship to nature, exploring what happens when natural and man made worlds collide and apocalypse occurs. Their exploration kicked off with a public zombie walk, with make up artist on hand to uglify all comers.

Down South at Tate Modern some of Damien Hurst’s most iconic images will be on display for any young Brit art lovers from 4th April. While up at Tate Liverpool from 22nd June you can catch the Turner, Monet, Twombly exhibition and see just how to paint a waterlily.

8. Finally, one for the Play Station generation..

Calling all boffins and geeks…some techy museums to drag your parents to.

Rotherham’s Magna Science Centre is a former steelworks jam-packed full of enticing gadgets and activities in pavilions of earth, air fire and water. Try out the Aqua-Tek trail and see how wet you get.

At Eureka National Children’s Museum in Halifax you can travel through time on 30th June and 1st July, meeting people from various civilisations. The following weekend its the museum’s twentieth birthday.

And on 30th March the National Media Museum in Bradford will open the world’s first gallery exploring the historical, social, technological and cultural impact of the internet. Which family with teenagers wouldn’t want to go to that?

Do you have a favourite Great Day Out? We’d love to hear about it.