“Another coffee?” “Why not?” Our cycling day was almost over. Now all we had to do was get our bicycles on the ferry. We had reached the port in Kiel to catch the overnight ferry to Lithuania. We thought we must be close to the ferry because we spotted a cruise ship, which managed to dwarf even the tandem and triplet. We supped coffee until check-in opened for our ferry. Then we went to look for the ship. It didn’t seem to be anywhere on the sea front, and neither did its parent company; DFDS.

“Can I help you?” asked a man on a bicycle, who had overheard us speaking in English. We told him the address we were looking for.

“Ah that is on the East Harbour. You are on the West. You must cycle into town to the station, and then go over the bridge. Are you English? I have been learning English. I want to get a job in England. I have been super-learning it on the BBC overnight, I am learning a lot of English but I never get any sleep. Where do you live in England? I want to live there but it is so expensive. If I get a job and they pay me four hundred and fifty a day I might have to pay four hundred and fifty in lodgings and then how will I pay for food? I work in computers. I have a higher certificate from Cambridge that I earned in Malaysia. But I need an address in England to get work. Where do you live? How long are you away for?” 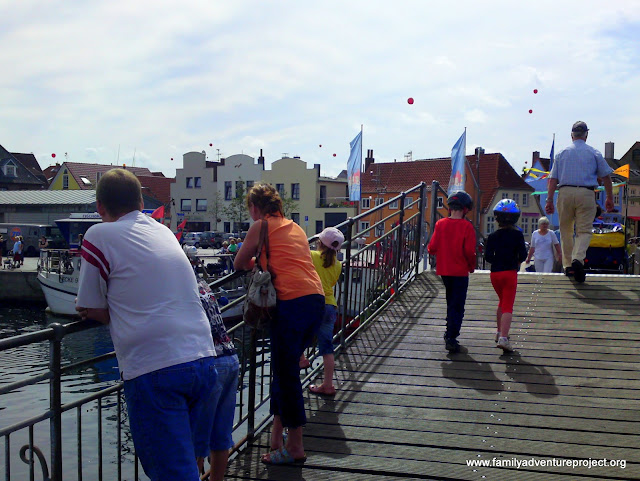 The mysterious red balloons in Eckernforde, near Kiel

We’ve a boat to catch

“I’m afraid we must get to the ferry now,” said Stuart, before we gained a lodger.

As we cycled we looked for signs for a ferry to Klaipeda. There were none. We passed the city station and then pedalled over the bridge. We cycled past the smart terminus for the ferry to Oslo, in the most central point of the quay. Then we cycled past the landing points for ferries to Sweden. Signs for Klaipeda, the Lithuanian port and our ferry destination, began to appear sporadically, always pointing straight ahead.

We wound out of town, then through another town. The German Sky supermarkets became Lidl, then changed to the equivalent of Poundland. The café’s became kebab shops and the walls became graffiti strewn. Men drank beers at the front of bars and goths hung out on roundabouts. Everyone was smoking. I remembered something I’d read about the Lithuanians, “If it is a person and has a lung that works then it will be probably be smoking.” But I reminded myself we were still in Germany. Signs to Klaipeda were the only ones left, and the traffic lightened significantly.

We pedalled ten kilometres or so out of the city and eventually reached our destination, hot and exhausted. At the ticket office, paperwork ruled. Each passenger took about ten minutes to process. As the women ripped off and scrawled on boarding passes for our five family members and four bikes, (to cover the length of the tandems) she handed us four navy blue packages wrapped in cellophane.

“They must be pillow cases,” I said to Cameron.

Then came our instructions.

“At 21.15pm you must go around the back of the building to meeting point 1. A man will approach you on a shuttlebus. He will ask for your tickets. You must give him your tickets and he will stamp them and then he will drive slowly and you will follow behind the bus. You must follow closely behind. YOU MUST NOT GO ON YOUR OWN. If you are found cycling ON YOUR OWN to the ferry you will not be allowed on it,” said the woman at the desk.

“But the other cyclists are going there now,” he said, pointing to a stream of bikes making their way around the building. 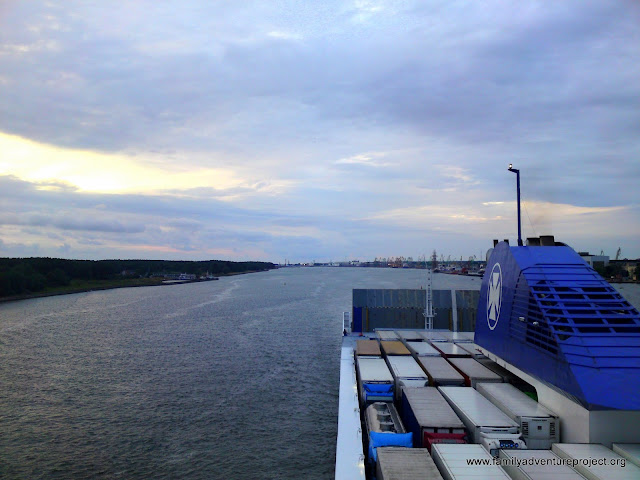 At the meeting point about ten cyclists sat in the dust, while a shuttle bus loaded foot passengers. It was 21.05. At 21.06, the shuttle bus drove off at speed. The cyclist at the front jumped on his bike. The other nine quickly followed.

It’s not that easy to load two young children onto a triplet and it took us a few seconds to play catch up. The shuttle bus bombed across the empty lorry loading bays at what seemed like 50 km an hour with a stream of cyclists puffing to try and keep up in its wake. A few hundred metres behind we struggled to keep up with the cyclists, let alone the bus, and we were soon ON OUR OWN as we cycled across the docks towards a distant ferry.

“I don’t think they’re chasing the right bus,” I said to Stuart as the shuttle bus quickly disgorged its passengers, and began its route back to the meeting point. Halfway along the tarmac the bus slammed on its brakes. The driver put his head out of the window.

“What do you think are you doing?” he said.

“We’re following them,” I replied, pointing to the line of cyclists now filing up the gangway onto the boat.

“Oy, hey you! Hang on. You should have waited. I need your tickets!” the man shouted, in English, then German, and possibly Lithuanian, as he went speeding back to the ferry to collar the errant cyclists.

As we loaded our bikes onto the ferry, the cyclists arrived who had followed the correct 21.15 shuttle bus. They found that we had filled up all the available space with tandems and trailers. The boat was brightly lit and to Hannah’s delight had escalators to take us to our cabins. Once settled in our little air conditioned room, Cameron produced the pillow cases. He opened one up.

Not pillow slips but shower caps

“That’s because they’re shower caps,” I said, putting one on my head.

“Where did you get that shower cap? Is the wearing of shower caps compulsory in Lithuania,” asked Stuart who was contemplating a shower.

The kids were so pleased with their new caps that we took a photo of us all wearing them, and then decided to take a walk on deck in our new hats. 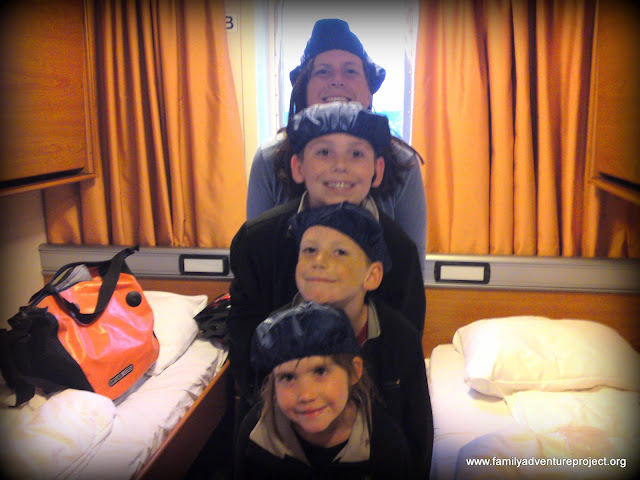 I can’t wear it to order coffee..

“I can’t wear it to order a coffee, that would be silly,” I said to Stuart.

I had two cappuccino’s in hand and was making my way over to the seating area when a crew member stopped me and addressed me in Lithuanian. Recognising my confusion (and perhaps my nationality) she switched to English, pointed to my headwear and said quietly, “That is not hat, but special saddle cover.”