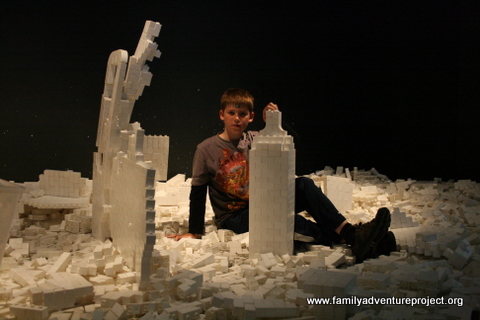 The shocking constructive and destructive power of kids

What do machines dream of? Ars Electronic Linz

We pick our way across the floor in the semi darkness, crunching through the whiteness. It’s painful on the feet. Everywhere there is construction. Fantasy buildings with turrets and towers. Jagged urban settlements. Half built palaces and half destroyed tower blocks. All in white; layers and layers of white. There is nowhere to stand or even to step so we stumble and crawl. It’s like Nagasaki with nodules. Two small boys next to us are systematically breaking down an intricate castle. But our children have an instinct to put this right and soon they are pushing one brick into another, concentrating on rebuilding the towers of Linz, or wherever they are in their own imaginations. The universality of the Lego-like plastic blocks indicate that Pixel City could be anywhere, but it’s no coincidence there’s a block for every Linz city dweller; 189,355 of them in total. We aren’t just getting a taste of this city, we are redesigning it.

We have to build a city

But soon we have moved on to build another city. This is our own personal city, designed around our individual fingerprints. We scan our thumbs into a computer and a ground plan of our fingerprint city is electronically drawn onto a giant screen. Buildings and spaces spring up around the lines and curves of our personal smudge. “Do you think it will be a big city or more like a village?” asks one of the infotrainers who are there to help. I can tell the boys have New York in mind. 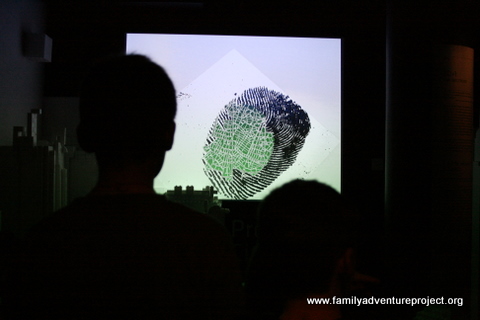 Your fingerprint can build a city

“My city is bigger than Cameron’s isn’t it?” says Matthew, who follows his brother.

“Of course it is, you have a bigger thumb. My city is better though,” comes the reply.

The infotrainer invites them to navigate through their personal city and have an adventure there with the controls of an i-pod. They are soon recklessly driving around their own thumbs.

Every stage of our visit to the Ars Electronica Center in the Austrian city of Linz delivers this high tech mix of art and science. It’s a glimpse into the future. But it’s not an imaginary future that slips through our fingers when we try to grab it. It’s the future that’s the cutting edge of now and it has all of our fingerprints all over it. We watch in the Fab Lab as 3D printers create objects layer by layer, objects drawn on a screen and requested at the touch of a print in 3D button. We can see this isn’t a massive jump from today’s technology, yet can also visualise what a game changer this is for inventors, engineers, architects and artists.

The Ars Electronica Center sets out to mix art with science and show how technology impacts on our creativity, inventiveness and potential. On a balcony above the entrance sits a giant birdcage with a tiny red bird sitting alone on a perch in the centre. At first glance it doesn’t move, but then you notice the floor of the birdcage, scattered not with birdseed but with the names of countries. And now and again the bird swings round to point its beak towards the text. Its’ movements are controlled by the locations of people around the world visiting the museum website, a weather vane of virtual global interest in Ars Electronica. It’s a neat trick, and an imaginative sculpture that takes your thinking about birds, weather vanes and interconnectedness in new directions.

Before we leave, Cameron sees the future in his own eyeball. Captured on screen with the help of an electronic scanner, his eye looks like a deep red ball of fire streaked with retinal lightning. Then I put my chin on the strange apparatus while a guide looks deep into my eyes. My retina is a limp and shallow pool; a too many nights spent reading under the covers. The scans are enlarged and added to an electronic gallery, where other visitors can gaze into our eyes when we are halfway to Melk. 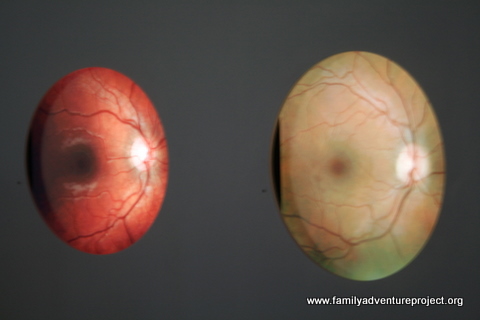 Looking into your own eyes with an iris scan

Email me my eyeballs

While Cameron emails his eyeball photo to himself, Stuart disappears upstairs, where true to form, he has found a machine that can play a grand piano. But it’s not playing a happy tune. It has been fed a speech from the International Environmental Criminal Court about the need to protect and care for our fragile Blue Planet. A computer has processed the speech, rewritten it as a score and on the half hour plays its ‘song’ to us; a machine urging humanity to look after the earth. The result is a discordant composition, so complex that a human being couldn’t begin to play it. The machine plays with such concern for precision that at times through the disharmonic composition you can almost hear the human voice and message which is its source and inspiration. 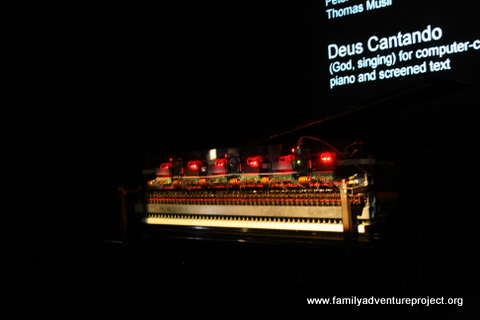 And as we stand listening we are reminded that this is our voice, interpreted by a machine. These are our visions, brought to life by technology. These are our eyes, captured in the blink of a scanner. What do machines dream of? The answer is here, in a 3000 sq metre Austrian museum in a place called Linz, situated on the Danube. I am at once humbled and empowered by this museum, inspired to create cities from my thumbprint, or at least put my own fingerprint on those I travel through in life. 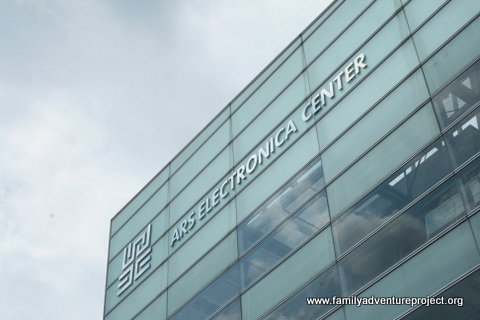 Museum over, we remount our own machines. They may not be machines of the future but they help us to experience more of the world as it is today. Back along the Danube cycle path, my imagination working overtime, I wonder what our bicycles dream of? Of shiny new chains and sprockets? Of a release from the limitations of our humdrum pace? Of being treated better? Of driving further, faster, achieving speeds and distances that aren’t humanly possible? And I wonder if a bike can have a dream, can a tandem have two, at the same time?

Disclosure note: Thanks to the Ars Electronica Center, Linz who provided admission tickets to allow us to bring you this story.

Do you have a view on this story? We’d love to hear your comments. Click comments below and tell us what you think.