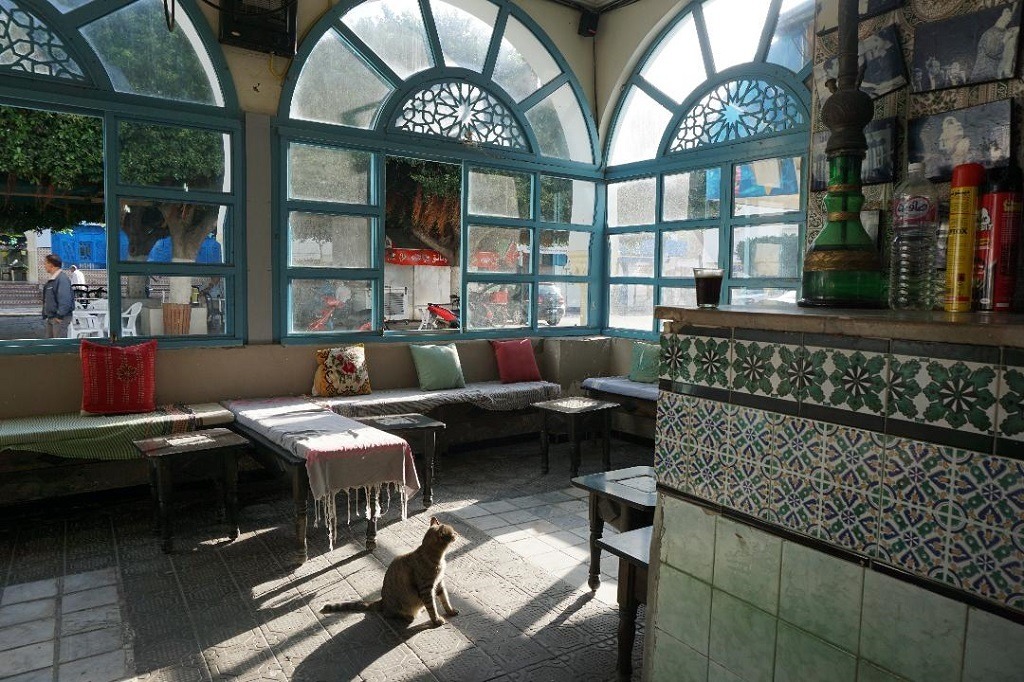 What do they drink in Tunisia? From a strong coffee in a cafe with its own camel to a mint tea on a terrace that’s been serving tourists since the 1960’s, it’s cool to sip on a hot drink in this North African country. But drinks also come chilled in the form of everything from fig liqueur to juices. You can go wine tasting and even go olive oil tasting. And if you visit Tunisia with kids there’s plenty of treats for them too. Oh and yes, I did say olive oil tasting! More of that later. In this advertising post for the Tunisian Tourist Board here’s five ideas for what to drink in Tunisia and where to drink it…..

What do they drink in Tunisia?

Mint tea is the traditional drink of Tunisia and is often served with pine nuts or almonds, depending on where you in the country. Chilling out is easy here and you can find coffee bars on just about every corner of just about every street. You might want to look closely before wandering in though, some are the domain of men, and while you’d be served as a woman, you might feel a little uncomfortable. At the coast, in tourist places and hotels this will be less of an issue.

Can I drink alcohol in Tunisia?

Unlike some other Muslim countries it’s possible to buy and drink alcohol in Tunisia. especially in hotels and tourist places. In fact wine making is one of the country’s oldest industries; going back to the Punic era 2000 years ago. The locally brewed beer is Celtia, and it’s not unusual to see it delivered by the bucketload in bars. You should also try Boukha, a spirit made from figs, Kids will enjoy the fruit juices, and freshly squeezed lemon drinks. On a recent trip to Tunisia, here’s what we drank and where we drank it….

1 Have coffee with the locals

Ali stands to greet us from where he is sitting with a coffee and a puzzle. “Welcome tourists.” he says. How ever can he tell?

We are in the sunny courtyard of a cafe called Le Saf-Saf, in La Marsa, just under 20 kms from the capital. La Marsa is a pretty seaside town painted in the traditional blue and white colours of the region. Locals, especially the French, come to this historic cafe for coffee and mint tea while tourists come for the camel; a white camel often employed to drive the wheel of a tiled well dating back to the Hafsid period, We don’t see the camel on our Sunday morning visit, instead we are charmed by the former Tunisair pilot.

“My name is from Ottoman times; I come from four generations. This is my table. And this is my cousin.” His cousin shakes my hand and doubles the welcome, the soft lines on her face reflecting her generosity as she tells me I am beautiful. You don’t get this kind of greeting at the British seaside, that’s for sure.

The welcome spreads. Across the road. someone is painting a white wall even whiter. He grins and poses for a photograph. At the cafe next door, the barman is busy making espresso, sleepy cats are lounging in the shade, and the locals are spilling in and out onto the street. One man beckons us over to his spot under a shady tree, tells us he is called Bahri, introduces us to his cousin, who he declares is head of Tunisian police. He then announces he owns both cafes. Do I want to buy them? Er, why not? The coffee is decent and I always fancied a camel as a pet.

2 Mint tea on a terrace

You do not get that quality of local interaction at Cafe des Delices in Sidi Bou Said. It’s more or less a pilgrimage for tourists. But whatever you do, don’t dawdle when you get through its gates. Everyone is rushing everywhere, waiters with tea and juices dance around chef on grills, and tourists line terraces, taking selfies seemingly all the way down to the harbour. Here mint tea with almond is the thing. But you can always have it neat. And sweet.

3 Happy hour at the coast

Later on it’s about the music and the nightlife. Tunisian blues and hip hop nights form part of the soundtrack at Yuka in the Ardjan complex in Gammarth. Meanwhile at nearby Jobi you can catch some jungle or soul and the complex of bars has regular happy hours. 10 km down the coast from Gammarth, Carthage ToBe has a sports bar with 12 screens showing matches from football to tennis. while you can catch show cooking at the restaurant. There’s a great open air bar where we order cocktails- the most intriguing being ‘absolutely fabulous.’ Tunisia also does great juices; the french influence is there in the freshly squeezed lemon drinks.

4 Go on the wine trail

Wine has a long history in Tunisia which you can trace in the Bardo Museum mosaics in Tunis. Or you can hear all about the emerging Magon Wine Route while sampling the produce by visiting a vineyard. We take a trip to Grombalia, just over 40 kms from Tunis. Rached Kobrosly, the winemaker at Domaine Neferis, gives us a tour of the 450 hectare site. Tunisia produces 40 million bottles a year and this winery alone makes over a million, including Chardonnay, Carignan, Syrah, Merlot, Grenache, Viognier and Pedro Ximenez.

The wine industry here was liberated by the end of a state monopoly in 2000 but these vineyards have a colourful history of their own. “This domaine in 1920 belonged to the French family Lanson. There are 200 hectares of vines, the rest is forest and olive trees,” says Rached, walking us around the winery.

“The harvest starts at the beginning of August and finishes at the end of September. We start always with the Chardonnay as it matures first,” explains Rached as we wander lines of state of the art chiller tanks in the open air. It’s a stark contrast to the shed filled with dusty barrels that will soon be a show-piece for tourists. “We have a big project to make a restaurant here in the old winery.” For now, small groups of visitors can book onto a tour and wine tasting in the castle, or from late March, join a weekend BBQ party. “An open bar and winery tour, with local cheese. olive oil and local beef,” says Rached. Sounds delicious.

After a brief tour of the bottling plant it’s time to sample the wine. Amongst the first is the Chardonnay we have learnt about on the tour.”We like the oaky wine. This is chardonnay 100 per cent, fermented in oak barrels for 6 months.  You see the colour is more gold, from the oak.”

Later we take our glasses out into the vineyard, as we toast and taste the harvest. As this is Tunisia we also taste the sun.

5 A taste of olive oil

Forget grapes, there’s a tree dotted with hanging mini bottles of olive oil in Riviere d’Or gift shop. It’s a neat marketing trick for a company with an established history of production in Tunisia. Nouha Louedi explains her grandfather started the company 90 years ago and like many olive oil producing businesses in Tunisia it’s gone from strength to strength – Tunisia is currently the world’s fourth largest producer. “We export to more than 50 countries,” Nouha tells me. “But we felt we had to come back to the roots which is Tunisia. And we have to value olive oil more so we make it into gift bottles and make people passionate about it because it’s not just a product. You can cook with or put in salad, but you can also give it as a gift like wine or flowers. It’s a very noble product.”

Nouha walks us around the shop, picking up an artisan crafted bottle decorated with calligraphy. “These are ten words that symbolise olive oil like authenticity, gold, goodness, health.” As we go she tells us about their three plantations. “We produce 12,000 tons of oil per year, 3000 of it organic. We have two main varieties – chetoui, from the north of Tunisia, represents five percent of our production. It is characterised by bitterness and fruitiness. Chemlali forms 80 percent of production. It makes a smooth sweet oil and doesn’t have a lot of pungency. It is only good for salads or fish, things that don’t have a lot of flavour.

We move to a table in the corner of the shop for a tasting. “To properly taste olive oil we use blue glasses so we aren’t influenced by the colour. We cover the glass with one hand so that we heat the oil and the flavour doesn’t evaporate.”

“We rub the bottom of the glass to heat that a little bit,” Nouha continues, “and when we take our hand away we have all the flavour come into our nose. We can see that it’s fruity or bitter or spicy but it’s mostly the fruitiness we get.”

“So then we taste. We get it on our tongue first.” She swallows and traces the path of the oil from her mouth to her chin to her neck. “Here we get the fruitiness and then the bitterness and here we can taste the pungency. These are the three characteristics of olive oil.”

We drink and she smiles. “This one is a very smooth olive oil.”

We leave the shop having had an education in olive oil. But like the many and varied Tunisian drink stops, what I remember when I look back on the experience is the quality of the conversation, and the taste of liquid gold.

Disclosure: This post is part of a paid campaign with the Tunisian Tourist Board. All cafe, bar and terrace chilling and olive oil swilling was our own, as are the words and images.

This post is part of a whole #Family Tunisia campaign. You can download our free ebook of things to do in Tunis. If all this talk of food has left you with an appetite, read Ting Dalton’s ultimate food guide to Tunisia. If you’ve ever wondered about taking the family to Tunis or surrounding area then read our article on nine reasons to take the Kids to Tunis. You can also follow several #familytunisia itineraries like my guide to a weekend in Tunis, and Gretta Schifano’s five night break.