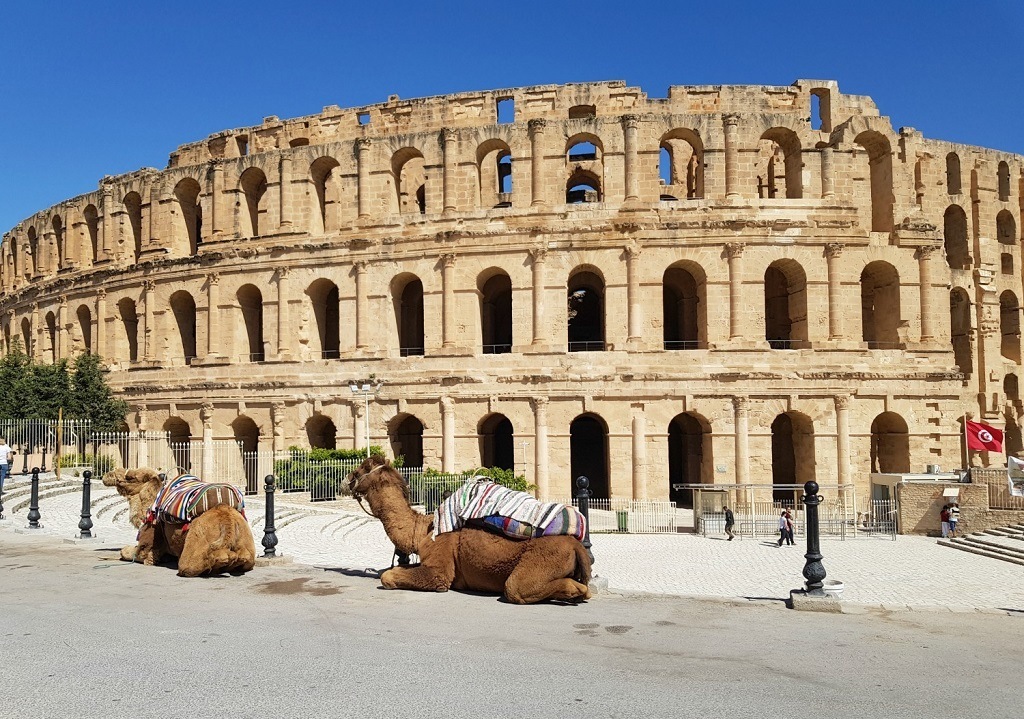 Tunisia for Families: 9 Reasons to Take The Kids

Tunisia is known for its affordable family beach holidays. But there’s so much more to discover in this North African country, especially if you have tweens and teens. Did you know you can sleep in the desert, visit Star Wars locations, tour a wine trail and walk a historic site, or five? And all in the same weekend if you really want to pack it in! In the run up to a Tunisia visit, I’ve pulled together some of the delights of Tunisia for families. You can also check out my post on a Tunis weekend itinerary following my visit…

Tunisia for families; an adventure in blue and white. Image by Gretta Schifano

I am expecting infinite shades of blue and white. Startling and subtle shades, drawing me down narrow sun-washed streets; with a whitewash of buildings reflecting the midday sun and a horizon so saturated I can hardly tell where sky becomes ocean.

I am expecting a sprawling rainbow of spices in vibrant souks, a million shades of grain absorbing the heat and chill of a Sahara sky, a red-orange harissa glow accompanying my food and the sun rising in every shade of the ripening pomegranate.

This will be my first trip to Northern Africa, and I am expecting a lot. British tourists have been heading to Tunisia’s beaches on package holidays for decades. But I want to go beyond the package holiday and the beach, to experience the full palette of Tunisian colours at the historic and cultural attractions of the north. And then next year returning to the south, for desert trekking and oasis swimming. In preparation for my trip, I’ve been researching Tunisia for families and here’s why I think it’s worth a visit.

Atmospheric ruined mountained villages greet you when you are to explore Tunisia. Image by Gretta Schifano

Tunisia with kids: 10 reasons to take them

Tunisia is an accessible and affordable way to experience Northern Africa with a family. Especially if you are based in the UK, where daily Tunisair flights can transport you to Tunis-Carthage airport from Heathrow and Gatwick in just under three hours.  You can pick up one of many competitive package deals online or book a flight and strike out by yourself. Next month I hope to visit well known spots such as the ancient city of Carthage and the hilltop village of Sidi Bou Said as well as discovering some less familiar in the north.

Sidi Bou Said…one of the highlights of Tunisia for families. Image by Nichola West

You can get around a whole lot of Tunisia for a little amount of money. Tunisia is the smallest country in northern Africa, situated on the Mediterranean coast in the north west and if you are a daring driver you can hire a car and explore. (Don’t worry if you are not as you can book daring cabs instead, dependent on your budget.)

The Man in Seat 61 advises the Tunisian Railways (SNCFT) are the best way to travel between Tunis, Sousse, El Jem, Sfax and Gabès, with a a branch line from Sousse to Monastir and Mahdia, and several other routes. “Trains are comfortable, modern and air-conditioned.” Talking of trains; a must is the Red Lizard Train that passes through the gorges of southern Tunisia’s rock canyons. This old fashioned tourist train follows the natural path of the Seldja Gorge below the Atlas Mountains with spectacular views of jagged desert canyons and an exciting ride through tunnels, over bridges and past natural springs.

You can go from sand to…er sand, in Tunisia quite easily. But one’s beach and the other’s desert. Image by Cathy Winston

3 There’s a whole lot of history to explore

From Monastir to Mahdia there’s a wealth of ancient history and some very impressive ruins. The town of El-Jem is a must. Once one of the richest places in Roman Africa, its most well known historic site is its huge 3rd-century amphitheatre. Having experienced the madness around Rome’s Colosseum last year on our Interrail Tour of Europe, I am intrigued by El-Jem’s lack of crowds, giving visitors the chance to imagine it in its heyday in relative tranquility. For more on El-Jem read this great post by Cathy Winston who blogs as Mummy Travels (and provided the lead photo of El-Jem with camels) giving 10 reasons why you should visit Tunisia.

For an even more peaceful taste of history you can wander the ruined berber village of Zriba El Alia, in the hills of Zaghouan province. Other options include a tour of the Ribat of Monastir which goes back to 796, or enjoying an ancient sea view at Fort Ottoman Borj El Kebir of Mahdia, which came to being in the 16th century. In the south east near Matmata, hilltop Tamezret is a Berber village popular with tourists for its 13th century architecture. In the south west the picturesque medina of Tozeur dates back to Roman times; meanwhile the town is rich with palm trees and dates and set around an oasis. Staying with the Romans I plan to visit the Carthage Roman Ruins and Museum including museum, Punic ports, theatre and Odeon, Roman villas, and Cistern la Maalga. If you have half a day and don’t mind getting active in the heat it’s possible to bike Carthage in three hours with tours in three languages. (Not all of them at the same time!)

Ribat of Monastir, still standing after all this time. Image by Gretta Schifano

4 Villages like Sidi Bou Said are a selfie paradise

My friend Ting is obsessed by doors. She will go crazy for all the selfie door opportunities in Tunisia. Sidi Bou Said is basically a village sized selfie spot, ready made for anyone with a blue and white Instagram grid. Take a virtual tour of Sidi Bou Said to help with your trip planning. Or check out Ting’s post on her wishlist for boutique hotels in Tunisia. With nice doors obviously.

It’s a regular hammam in Northern Tunisia but check out the door selfie opp! Image by Nichola West

5 You can immerse yourselves in art and culture

One of the best overviews of the culture of Tunisia is a visit to the impressive Bardo Museum in the capital Tunis. A more intimate way of immersing yourself in art is by visiting artists in their studios. I’m excited I’ll be visiting Sadika Art Gallery to chat with Sadika Keskes who brought blown glass back to Tunisia. This video showcases one of her art installations highlighting the plight of refugees:

Your money goes a long way in Tunisia; especially in the souks, which are a vital part of the experience. If you are shy about haggling, one technique is to go in at half the price on offer. My tip is to practice in the spice markets where even if you don’t get the best bargain your spending will be negligible. Then move onto the handicrafts including ceramics, textiles and jewellery, including silver pendants. Kids soon get into the swing of it too. We first experienced souks in Dubai where we sent the children off to source and buy various gifts.

The colours of the Tunisian souk. Image by Nichola West.

7 Doughnuts qualify as a national dish

It’s said you cannot visit Sidi Bou Said without eating bambalouni; cheap, delicious doughnut snacks of flour dough fried in oil. They are served with a sprinkling of sugar or soaked in honey and available from street stalls, especially at the coast. But of course Tunisian food is about more than sugary treats. The Tunisian cuisine reflects its central location in Northern Africa, combining African and French flavors. It can be spicy. The star of the show is the versatile couscous, often with added seafood or lamb. You should also try Tunisian tajine (a savoury frittata) and Tunisian salad. And of course there are the doughnuts. Leave room!

8 You can see how your food is made

Provenance is more than a buzzword these days; people demand to know where their food is sourced. Tunisians are on the ball with this and can show you around their kitchens. Take a cookery course in the capital Tunis for a practical introduction to the cuisine. No holiday is complete without a glass of bubbly and I will be taking a tour of the underground gallery of La Fontaine aux mille Amphores cellar, where Les Vignerons de Carthage produce a sparkling wine using traditional methods. Then I’ll be heading on to Domaine Neferis, a winery in an amphitheatre in Cap Bon where the elevation gives the grapes an extended growing season. The wine producer works with Sicilian partner Calatresi, and employs Tunisia’s only female winemaker. I’ll also be finding out a lot more about olive oil as Tunisia is one of the world’s biggest producers.

Explore how your food is made in Tunisia. Image by Gretta Schifano

Nichola West, who blogs as Globalmouse Travels loved the bread demonstrations during her visit. At Dar Zaghouan she watched a flat bread called tabouna being made. Tabouna is a round bread made in a traditional clay cooking pot, (conveniently, or confusingly also called a tabouna!) She also watched kaak warka, a type of pastry, being put together in Zaghouan. The rings are made with the eglantine flower water popular in the region and combined with almond paste to create something memorable. Read more about it in her post on 10 reasons why you should visit Tunisia.

If you have Star Wars fans in the family (If we are going to have Star War wars, you should know my son could alphabetically list every character in all movies plus spin-offs by the age of five), you can base a whole week’s trip on seeing the film locations. This includes visiting the underground ‘troglodyte’ structures of Matmata, taking a hike in ‘Star Wars Canyon’ and walking through the streets of Mos Espa. Note a state of emergency is in effect in Tunisia, and has been extended a number of times, most recently on 31 August 2019 until 31 December 2019. The UK Govt’s Foreign and Commonwealth Office advises visitors to be vigilant at all times, including around religious sites and festivals. Information changes regularly; check out their advice page before planning your visit, especially when planning a visit to sites in the south that may be close to areas of concern.

Love Yoda? Walk in his footsteps. If yoda has feet?

This post is part of a paid campaign with the Tunisian National Tourist Office. Any dreams in blue and white, doughnut pangs and over-excited trip planning is, as ever, all my own.