We weren’t sure we could get our bikes through the gates. But the man in the uniform was certain we could. He apologised for not speaking perfect English and then spoke perfect English, standing upright in his army outfit and cap. He wasn’t impressed with the boys’ postures.

I will show you a beautiful place

He marched around a large red bricked building into a courtyard, where he pointed at map of Latvia before it gained its independence from the Soviet Union.  The whole area of Karosta, a few kilometres outside of Leipaja, had once been a naval base for the Soviet army, and we were standing outside the military prison; or as our comrade commander put it, ‘an education and punishment centre for bad soldiers.’ He led us into the dark building. 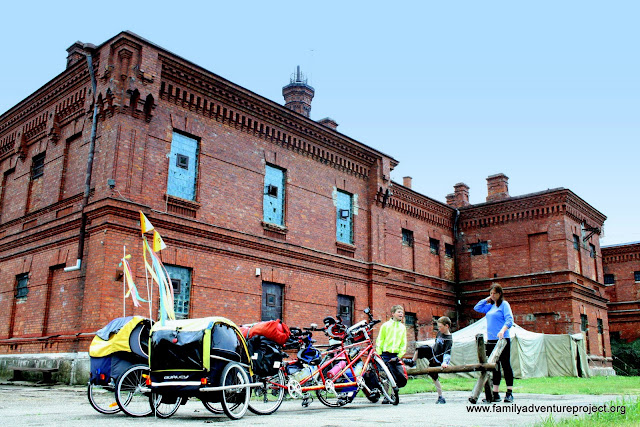 In the grounds of Karosta Prison

Not Karosta prison, but a re-education centre

Karosta ‘prison’ was used by Latvian, German and Russian military at different times, depending on who was occupying Latvia . But the punishment regime was pretty similar. While it wasn’t a picnic, I’d seen worse cells in TV documentaries.  Some of the small rooms even had a window, they weren’t damp or rat infested, and only ever held four or five people at a time. But the regime did sound brutal . The prison was for deserters or those who needed punishing within the army; they stayed only a maximum of five days at the centre, before they were sent back to their troop in the front line or shot dead in the woods. And their stay there involved 17 hours a day work, training and re-education, with only six hours sleep on hard wooden slats. Training involved running for hours at a time in a gas mask and the work was hard labour.

Matthew didn’t think he’d like it. He put on a gas mask for 30 seconds and Comrade Commander removed it so roughly his ears smarted.

“Stand up straight. Hands out of pockets. Now I show you another beautiful place. You must run, not walk here, always run. Here each day has 25 hours because you are flying. Do you know what I mean?”

“You will move so fast. NOW MOVE.” shouted the Comrade Commander, striding off down the corridor towards a pitch black punishment cell, to show the boys the implications of slouching. 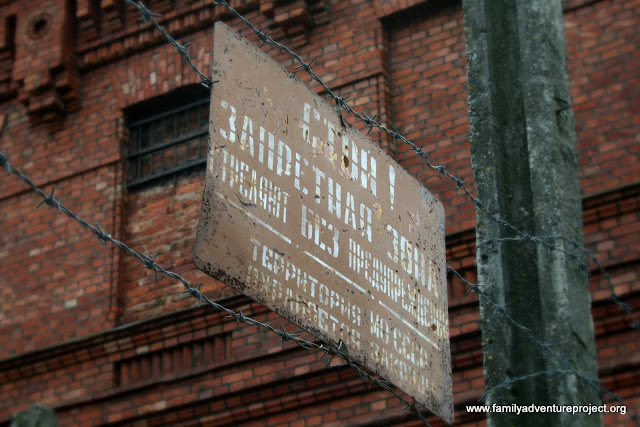 This can only mean trouble

Karosta prison is an unlikely tourist attraction but it is apparently very popular amongst Latvians. Our Comrade Commander put on a gentle show for the children, but the special ‘reality shows’ sounded far more hellish; treating those who sign up like prisoners. You can even pay to stay overnight which involves being stripped and hosed down, having a medical and being locked in a cell with regular checks from officers in uniform like the Colonel Commander. There is also a two hour version for the less hardy. We were shown a new ‘beautiful place’ -the solitary confinement cells for naughty soldiers and I shuddered at the thought of being locked in for a single minute, let alone an hour. The stag party waiting in the courtyard for their reality show weren’t quite as fearful; they had even brought their own beer.

“This is the dream room” said the commander, opening a solid wooden door. “Why dream room? Because you spend all day or night dreaming of it. If you were soldier you would have half an hour here.”

He showed us into a cramped room, with sink and primitive latrine. Matthew shrugged. Even at the age of ten, whiling away half an hour in the bathroom is no problem.

“Two hours for the WHOLE PRISON”, the Comrade Commander shouted. “Which means two minutes for every eight people. And you are only allowed to visit the toilet twice in twenty four hours. Stand up straight. Take your hands out of your pockets or you will get extra two days in punishment cell.”

The prison was starting to lose its glamour for our boys. 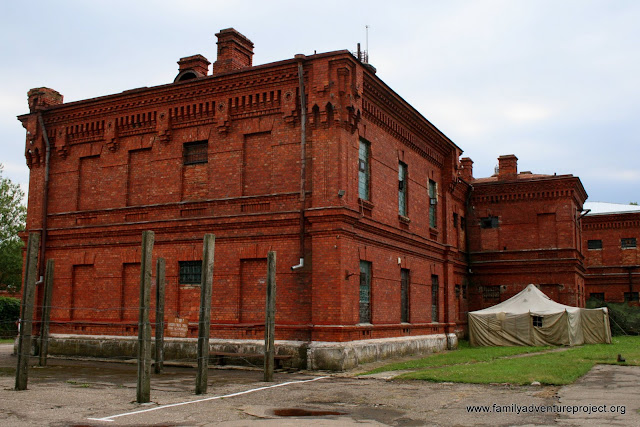 The luxury tent muster point for stag and hen parties

But beyond the prison is a place of beauty

As we left, via a courtyard bound with barbed wire, the stag party was being rounded up and taken into a military looking tent. Rather them than me. The offer of accommodation was less enticing than a night spent in the scrub.

The former hospital turned prison was a detention centre up until 1997. While it is now preserved as a museum and example of Latvian heritage, the surrounding area, filled with abandoned concrete apartment blocks and unkempt grasslands is a grim and ever present reminder of the Soviet occupation of Latvia. It seems independence and EU funding couldn’t stretch to a makeover of this sprawling former army base.

As kids kicked about the cracked pavements on bikes, we turned the corner from the prison, resolving to get out of there and find a coffee somewhere. And then our breath was taken away by the bulbous golden spires of a cathedral.  Astonishing, and completely unexpected; the four ornate guilded domes provided a stark contrast to the concrete greyness of life around it. 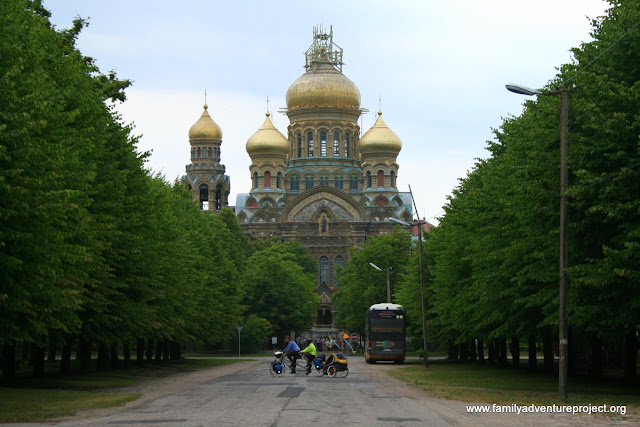 But even from the doorway we could see the regime at St Nicholas Maritime Cathedral was as strict as the prison. Built by the army in the architectural style of a Russian Orthodox Church, this building was only restored to its former glory in the 90’s, after being stripped of its interior in WW1 and spending years decaying as a cinema and social club. But it was decaying no more. Everyone was polishing or tidying something, and a hoover was roaring in the background. We read the rules, which were endless. No shorts, no cameras, no phones. Heads must be covered. It didn’t say anything about slouching or hands in pockets.

A round faced but stern grey haired woman in a headscarf came to meet us and swiftly dressed me in a skirt and put Stuart into some interesting pantaloons. She then gave me and Hannah a headscarf and pushed us in. Inside, someone turned off the hoover and the candelit space seemed to grow before our eyes. Religious paintings covered every available space on every available wall. A man in a long beard tended to the altar. Long tapered candles filled the air with muted light and scent. The woman with the headscarf followed us around. It appeared she was our self appointed Russian Orthodox Comrade Commander. Hannah fidgeted and the Comrade Commander glared. Hannah and Matthew gently teased each other and she came to remonstrate.  Eventually she chased us out of the church, into a rain storm that made Karosta look even gloomier than before, but even the rain couldn’t dim the magnificence of those golden cupulas. Karosta had delivered. We had seen two ‘beautiful places,’ and were now ready for our lunch.  No reality shows needed. 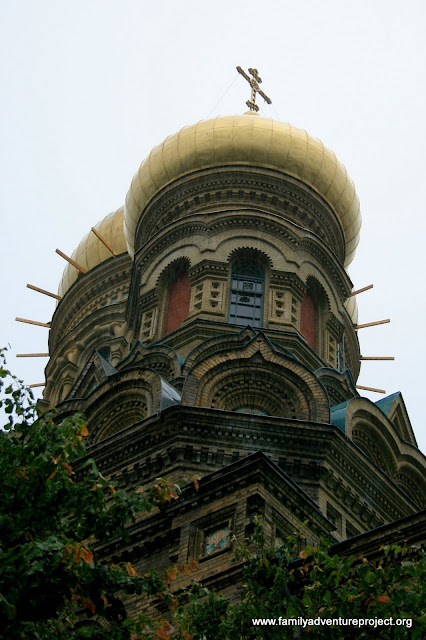 Golden spires a marked contrast to the grim Karosta prison