It’s National Geography Awareness Week this week and families around the world have been challenged by National Geographic Education to get out and have a geography related adventure in their own community.

A life or death mission

Never one to turn down a challenge Stuart decided upon a life or death mission; to visit a place we’d never been to before (thankfully); a place so close and yet so far (hopefully); the local graveyard.

I didn’t really want to go and didn’t know quite what to expect, other than graves and flowers, but like all good mini adventures, after a bit of stumbling around we did find a message there for us. It wasn’t exactly living geography, but in this peaceful place of the dead, in the middle of our thriving village, we did get a clear message from past and perhaps a macabre glimpse of the future. 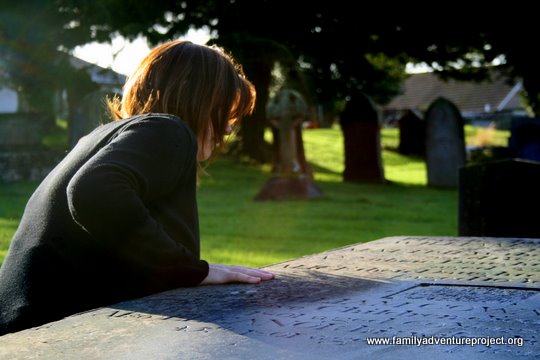 These tombstones all have stories to tell

“Wow. Domino Valley.” says Matthew, his adolescent energy subdued, as we stand over a mossy grave in the diluted morning sunshine. Beneath us is a huge tablet of stone; the frontage of a substantial tomb. Within this tomb is a family. This family is the size of our own. We don’t know their story and we never met them. All we know is they lived in our village, long before we were born, and died within a few years of each other. A whole family; completely erased, but for a grey slab tombstone in a village churchyard.

“Come and see what I’ve found Dad!” shouts Cameron, from the other side of the graveyard.

“In a minute,” replies Stuart.

“Take off those rollerskates. It’s disrespectful.” I snap at Cameron, who snaps off his wheels and ambles across the long grass to join us at the Coward family tomb.

Matthew, Stuart and I are silent and reflective. Wind chimes tinkle on a nearby grave, perhaps to remind us that this family once had a collective heartbeat. Almost two centuries ago the Coward kids left their childish footprints in the dust of this village the same way our children now leave trails in the dewy grass.

“Dad, there’s something over there you really need to see,” pleads Cameron. 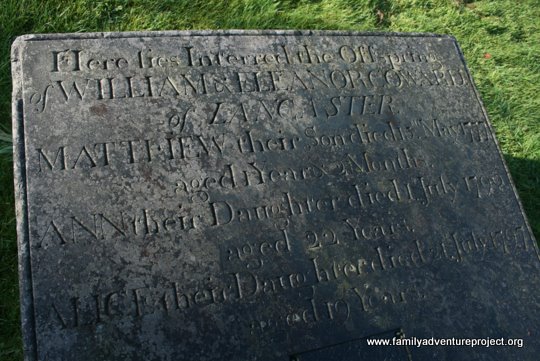 We are busy puzzling out this family story of life, love and death

Graveyards are full of stories

But we are busy puzzling out one ancient family’s journey from life to death. William and Eleanor Coward lost their son Matthew in 1777, taken from them just one year and two months into his short life. I feel a lump in my throat just reading that. Then in 1796 daughter Ann passed on, only 22. Then daughter Alice, age just 19. Imagine that; 3 kids, all dead before before their adult lives had really got going, all dead before their parents. Then, four years later, on 8th December 1801, Dad William passed away, followed by his wife Eleanor. Just 17 days later.

We stand in silence. I’m wearing a thin jumper and the light midday breeze makes me shiver.
“She died of a broken heart.” I say.

“Do you think she died without opening her presents?” asks Cameron, pointing out the Christmas Day date, chiselled into the ageing stone. “Maybe she got up early and did that first.” 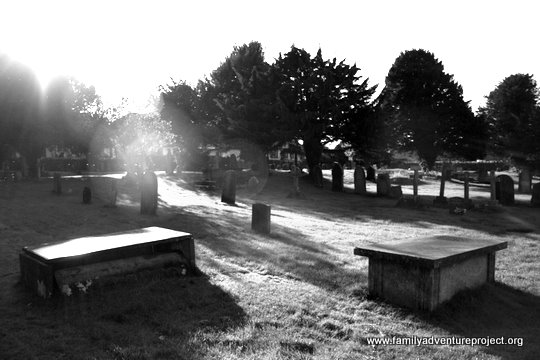 Stories of love and loss and family tragedy

There’s a similar story on another nearby tombstone, that of the Hawthorn family. Another tale of short lives and a domino of deaths. First son died 1832, then a few years later father Thomas, 53; not much older than  Stuart or I. Then two more sons, and eight days after the last son, the matriarch, Frances. Such family tragedy seems so alien to me, to my family, to this time yet here it is written in stone. It’s part of this place, our village, local history. I’m shocked and intrigued. How come families collapsed like this? Is this the toll of loves lost? 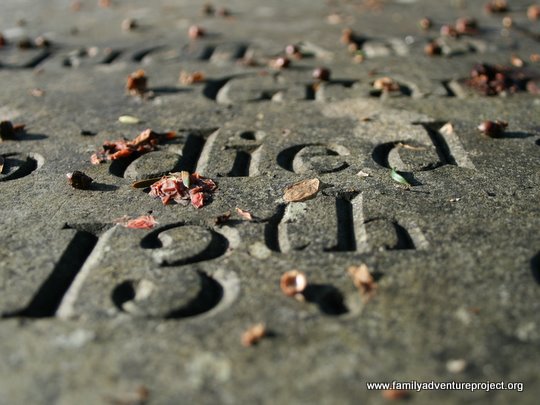 “Most likely disease,” says Stuart matter of a factly. “It’s weird. I feel like I shouldn’t be here.”

I know what he means. But really, we should. This graveyard is part of our community. These families are sewn into the fabric of our collective past. It’s shameful really that it took a National Geographic challenge to prompt us to find out a little more about where we live.

“You’ve all got to follow me now.” says Cameron, weaving his way around the gravestones to a memorial stone he has spotted. “That’s you in a few years Dad,” he says solemnly as we all line up in front of it. 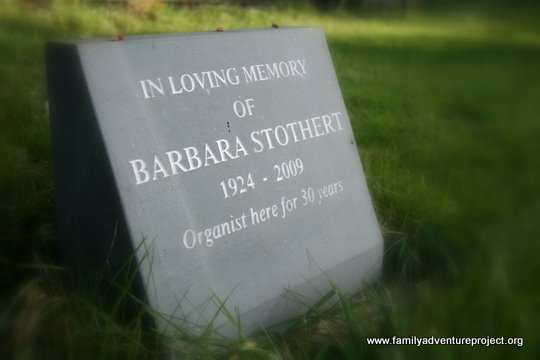 Have we seen the future?

I smother a growing smile. Stuart, the organist for ten years of a tiny church in Kirkby Lonsdale, takes a photograph of the grave. We came to visit the past, but he has seen the future.