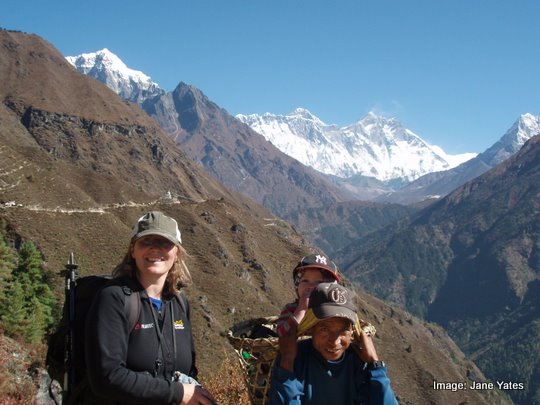 We love to bring you tales of our own family adventures here on the blog. But part of the reason we started The Family Adventure Project a decade ago was to try and inspire other families to get out and get active together in many different ways. From epic challenges crossing continents to micro adventures on your own doorstep, there are all sorts of big and small adventures you can have with a  family, if you have a bit of imagination, an attitude of enthusiasm and perhaps a dash of determination.

Over the next year we’re planning to bring you a series of interviews with Adventure Mums and Adventure Dads; committed parents who combine their professional experiences in the outdoors with an active and adventurous family life. For the first of these feature style blog posts I met up with Jane Yates, wife of high profile climber and writer Simon Yates. I didn’t have to go to the other end of the earth to do this interview, although Jane would clearly be quite comfortable in any far removed location. Instead I spoke to fellow Cumbrian Adventure Mum Jane in my local arts centre, where a very relevant festival was in full swing….

Jane Yates on taking kids to the office

From cycling in Lithuania to mule trekking in Morocco, Jane Yates and her children embrace adventurous family travel. But then, if your husband is a world-class climber, it can be the best way of keeping in touch. I met Jane and Simon Yates at Kendal’s Mountain Film Festival and chatted with this active Cumbrian Mum about the part adventure plays in their family life life…

“For our kids it’s like going to see Dad at the office. They get a really good understanding of what he does,” says Jane about her experiences of travelling the world with her two young children; Maisy (7) and Lewis (5). Her husband, professional climber Simon Yates, is away from the family for huge chunks of time. And when Jane says ‘away,’ she doesn’t mean at a meeting or conference a few hundred miles down the road. Approximately four times a year Simon disappears to the other side of the world to guide other mountaineers on climbing expeditions in the remote wildernesses of Greenland, Yukon and Bolivia. 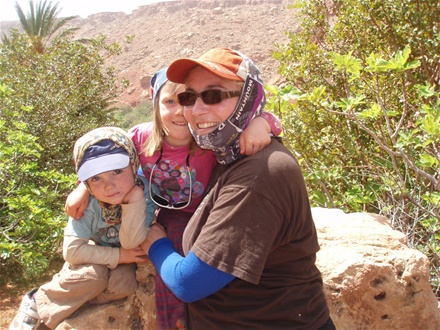 Jane and the kids in Morocco. Image: Jane Yates

Touching base near base camp

Other families in the same situation might settle for staying at home watching Ice Age movies until Dad returns with tall tales of his own close encounters with penguins. But the Yates family have always had a policy of touching base near base camp, or enjoying quality family time in lands of ice and fire, “When the children were little we made the decision that if Simon was away for three or four weeks we would try and meet.” Jane explains. “When he was in Nepal we trekked for ten days near his base camp. He sent three of the porters down and they carried Maisy and Lewis. And then we met up and did it all in reverse. It’s always quite nice, seeing where Simon is.”

Once, by accident, Jane and the children even ended up joining Simon on his expedition. “We went out to Tierra Del Fuego where Simon was climbing in the nearby Chilean mountains. We planned to meet him and spend a couple of days together between trips. The skipper on his yacht suggested we join them and suddenly we were on their climbing expedition amongst the glaciers. They went off and climbed the mountain and we stayed on the beach. It was like playing on the shores of Ullswater,” she laughs. 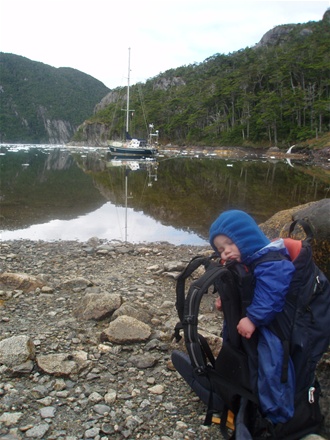 Jane and I are chatting over coffee at the Kendal Mountain Film Festival. Over the course of the day the couple have been catching up with friends and colleagues at this international event. But while some people have travelled great distances to attend, Jane and Simon are based on the doorstep. Many years ago Simon cut his climbing teeth in the Lakeland peaks and the couple now live in a village in the Eden valley, where Jane is a primary school teacher.

Family adventures don’t have to be big

Jane stresses that while her family is connected to extreme adventure, Maisy and Lewis get just as much out of their physical surroundings in the Lake District as they do hiking across the world. “Family adventures don’t have to be big and ambitious. I think playing on the shores of a lake or a river and climbing amongst the trees is one of the best experiences you can get. We saw the whole of Orkney with Maisy when she was a year old. And we did another trip with the children where we just went on public transport from our local station to Scotland for three weeks. We wanted to collect a few more Scottish islands. We’ve now nearly done them all.” 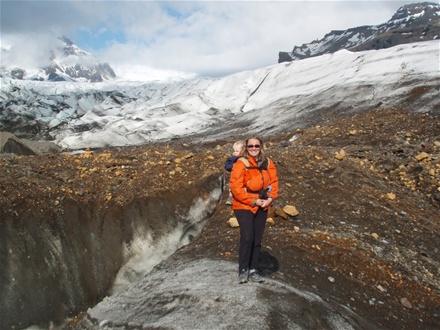 The Yates family have never wrapped their children in cotton wool. When their daughter was nine months old Simon was on a speaking tour of Australia and New Zealand and they used the time in between talks to explore their surroundings. Jane says she found travelling with babies easy on the whole. “When they were little they just seemed to sleep all the time. If we were cycling and had a big stretch, we’d wait for them to fall asleep. Like lead in the trailer!” I tell Jane I admire her willingness for travelling on her own with the kids. I’m not quite so brave, and on our travels I sometimes find myself hiding behind Stuart. But I suspect that like me, she thrives on being out of her comfort zone? “I do like to go places where I don’t speak any of the language and no one else speaks English,” she confirms. “For me, adventure is all about having experiences where there is uncertainty.”

Kids need to learn to make their own judgments

Like all mothers, Jane is constantly parenting on the hoof, especially when she is alone with the children in an unfamiliar place. But she is refreshingly keen to let her children make their own decisions, take responsibility for them, and face the consequences, “That doesn’t mean I let my children do what they want…but I like them to have the freedom to make their own judgements, whether it is deciding how high they should go up a tree, or deciding which road is safe enough for them to cross. As parents it is our natural instinct to protect our children and I have that strong urge as much as any mother. But having adventures is all about stretching ourselves (both myself and them) rather than taking what other people call ‘risks.’”

It’s never a case of hanging around waiting for Simon to come down off a glacier or catch a ski plane out of the wilderness. While they love catching up with him, they are happy to be a threesome, and explore a country for themselves. Past trips include a month in Argentina, and a trekking trip in Morocco, “I had a contact who said he could sort us out with some mules. So we arrived in this village and the mules appeared and off we went,” says Jane. Her latest adventures have involved homestays; “The people we stayed with in Lithuania were so welcoming, and we got to see a side of life we wouldn’t have seen if we’d been staying in hotels. It presents natural opportunities for the children to play with other families.” Jane says this connection with other people is really important to her, “I suppose what I feel the children have really got out of of our travels is the opportunity to mix with different cultures.” 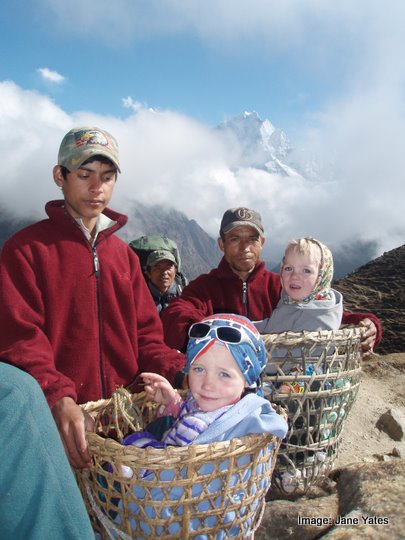 At this point Simon joins us and describes a childhood full of adventure. “We lived in the countryside and we were allowed out to explore all the time.” He hopes to pass his love of the outdoors onto his own children. “Living round here it would be a shame if they don’t appreciate the outdoors. It’s an incredible facility to have on your doorstep.” He thinks the travelling makes the children more confident, but he confesses that their regular globe trotting can skew expectations, “There are some unexpected twists. When we were in Delhi we’d just pile into a taxi or rickshaw. Then when we were in London they thought they could do the same. They didn’t realise it was five quid every time they opened the door!”

Jane says the benefit of travelling on her own with the children is that every one stops to chat and ask about her adventures. “As soon as Simon is around I don’t get so much attention.” she smiles.
“Nobody talks to you and I don’t either,” Simon jokes.

Simon already has a full schedule of trips for next year and in February Vertebrae Publishers are bringing out his new book about travels in the wilderness. Meanwhile Jane is involved with the school Christmas production and parties while dreaming up a trip to Poland with the family, and unusually, a trip to Nepal on her own. While so many people moan about getting stuck in traffic on the way to the office, and delays on the line making them less productive, you have to admire this Cumbrian couple who turn travelling for work into one big family adventure. 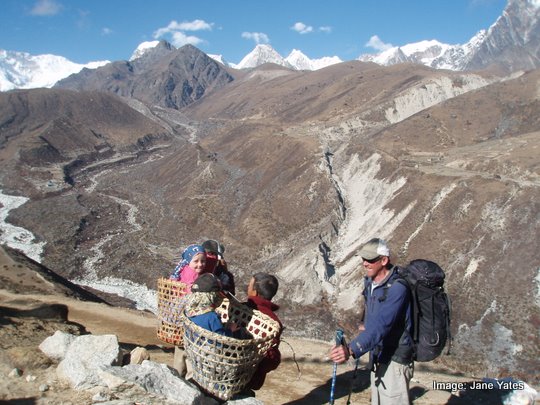 Simon and his kids in baskets, Nepal. Image Jane Yates

Acknowledgements: Special thanks to Jane and Simon Yates for taking the time to talk to us, and for the use of images. Jane offers talks about travelling with the family and her philosophy of learning to organisations and special interest groups. You can contact her via her website.