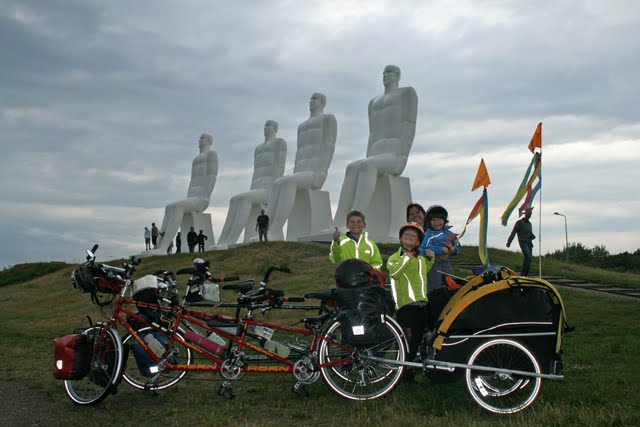 Four Men of the Sea meet Family on a Bike

Under a darkening sky

We are cycling through the village Store Darum in Denmark. With a motorcycle escort. He is trying to go as slowly as we are pedalling. Our speed is tricky for him and he circles ahead. He is wet. We are more wet. He pootles back to us and lifts off his helmet.

“Go straight on to the end of the world and then turn left,” he says.

Crikey, the end of the world? Then he speeds away. Either it is too wet for him or we are too slow. Either way we are on our own.

Our first day in Denmark began wet, and went downhill from there, in a typically flat Danish kind of way. We trundled off the ferry into drizzle, and found ourselves taking shelter on the high street in Esbjerg. When the rain cleared we made a push south, for Ribe, the oldest town in Denmark and therefore sure to have worked out how to shelter tourists from the rain?

We didn’t get more than half way there. The sky got darker, and darker. The wind started to bluster. Matthew said he was feeling scared. I knew what he meant. We pulled off into a tiny settlement.

“Make for the church” I shouted, spotting a steeple a few hundred metres away.

A family in waterproofs cycled past us at full speed without smiling or saying ‘Hei’. High in the charcoal clouds someone turned on the shower. In moments the rain fell down, and within seconds it was at full pelt. Or so we thought. But there was more to come. Soon we were cowering under a tree as sheets of water lashed towards us with almighty crashes of thunder. Lightening flashed directly overhead. Rain was coming so fast that I could hardly breathe, and I wondered if I would drown in it. The edges of the street turned into a river, and water ran through our shoes and down the road. 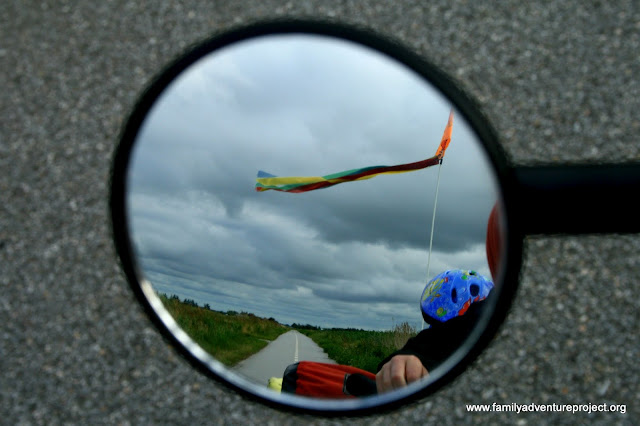 The clouds threatened all morning… and then the heavens opened

Come in out of the rain…

“Come into my house,” he then beckoned. Torn between two Vikings we didn’t know what to do. The biker man grabbed us and pulled us across his threshold. We abandoned the bicycles in the road and stood in his hall, rainwater pouring from our clothes and shoes onto his wooden floor.

All around us were oil paintings. His wife was an artist, he explained. His blonde wife sat in the corner and smiled, under a painting of woman with blonde poodle hair who was holding a poodle.  Cameron took his shoes off and held onto a hall cabinet full of sculptures to steady himself. It wobbled and I panicked, grabbing at the moving sculptures.

“Take a seat,” said our new friend and rescuer who introduced himself as Edward, and I wondered how this would be possible without turning the seat into a large puddle. Edward brought us a huge bowl of freshly made popcorn and a jug of shockingly cold hot chocolate. We consumed it all in minutes, very grateful of their hospitality and the warmth of the popcorn.

After an hour, once the pleasant popcorn chat ran out, it was time to leave. Edward offered us a motorcycle escort to the next junction so we didn’t get lost on the way. We accepted, put on soggy shoes, and headed back out into the rain. 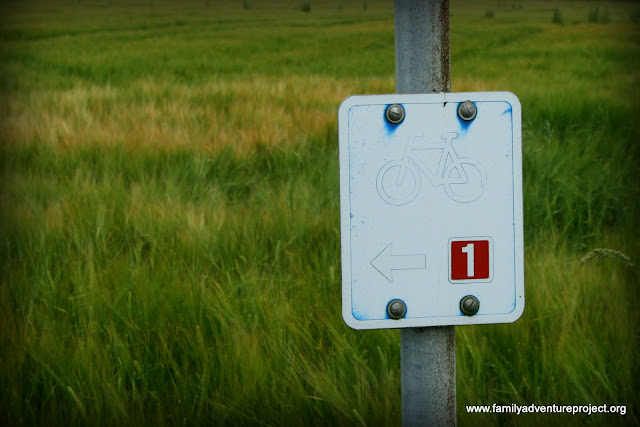 The route is clear, the weather less so

Feeling the forces of nature and humanity

As first days go, it was the usual mix of unpredictability and chaos. It was also a day where we felt the forces of nature and human kindness. We were most definitely on our way.