Having Triplets On A Train

“You can’t come all the way to Denmark, home of the Vikings, and not visit the Viking Centre!” said Stuart.

And so began a two day diversion that would bring two islands, an international border, and some unexpected drama. 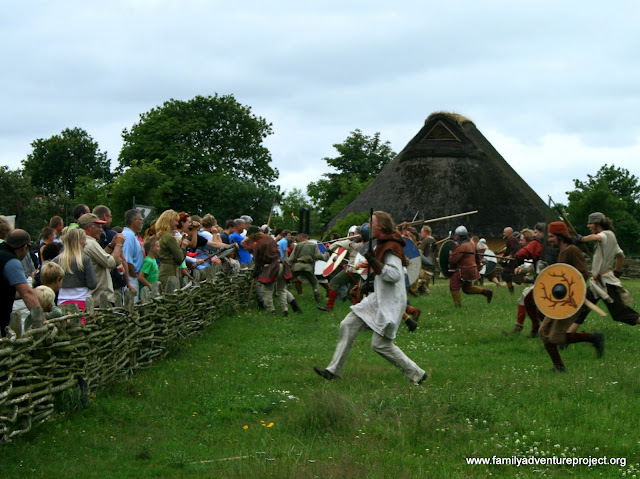 You’ve got to visit a Viking Centre

The Viking centre was suitably inspiring and we spent most of the day living like the Vikings do, banging square pegs into round holes with wooden mallets, having fights with sack pillow cases and whittling Harry Potter wands out of sticks, although I’m still not completely convinced Harry Potter was around at the time of the Vikings.

But it meant that by the evening we’d only done thirty kilometres, when we planned to have covered about sixty. And so it was we pulled up to a campsite, where three old men with accordions played Viennese style music while the kids trundled up and down on little red tricycles provided by the owners.

Behind already and we’ve only just started

Our late night planning session revealed we needed to get within striking distance of the German border, and to do that we needed to make up some miles. But the route looked dull; long flat roads, passing through small rural villages, with the wind in our faces and without opportunities to buy the Danish pastries Cameron was already addicted to.

“You can’t come all the way to Denmark and not go swimming in the North Sea..” said Stuart, turning the map around in his hands.

“But the North Sea is to the West, and we need to go South East,” I reminded him. 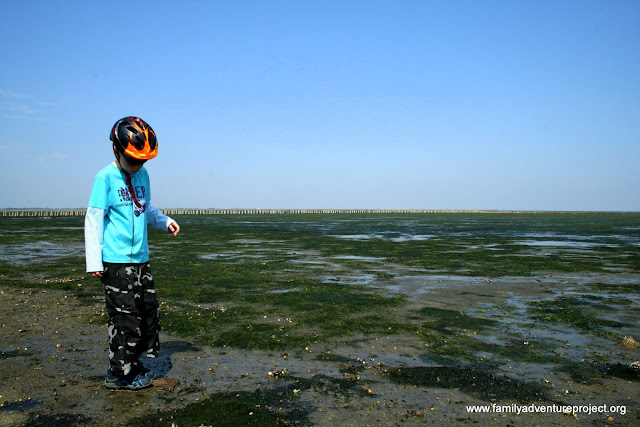 Playing by the landbridge across to Romo

But isn’t the North Sea the wrong direction?

“Yes, but if we cycle over that ten kilometre landbridge onto the island of Romo, we can have a swim in the sea, then cycle to this little port. See here? Then we can pick up a ferry to the island of Sylt, which is apparently Miami Beach for Germans. If we cycle down Sylt, looking out for out Claudia Schiffer and Boris Becker as we go, in the town of Westervelt there’s a station. Apparently you can take a train across that bridge as that’s the only other way off the island and that will drop us onto the German mainland. Then cycle 10k and we’ll meet the route we were going to take originally. It’ll be a far more interesting day.”

What could I say? The forecast was for heat and I fancied a swim.

Time for a swim?

The North Sea was a long way out towards the horizon. But you could drive to it, about a mile down a vast sandy beach, with kites in the shape of penguins and tigers roaring through the sky, cutting it up from every angle.

The beach was one long car park as thousands disembarked from their vehicles and pushed multicoloured windbreaks into the sand along the shoreline. We cycled to the front, parked our bikes amongst the windbreaks and nipped into the sea for a swim. It was worth the hot cycle ride. Refreshingly cold and clean. 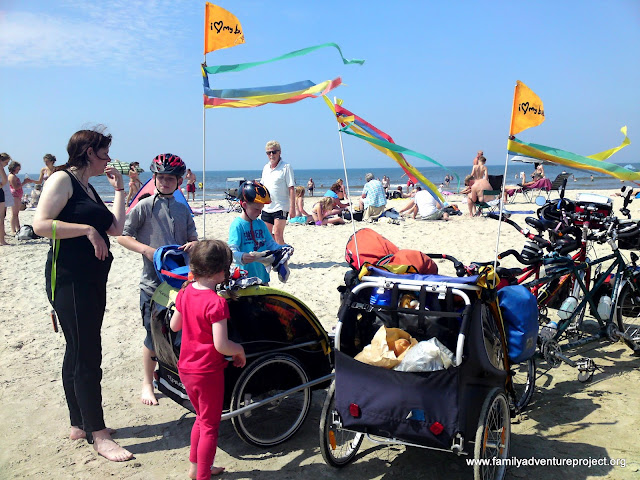 Who says you can’t take bikes to the beach?

Back on the bikes we sped for the ferry, trying to remember where we’d stashed our Euros. But once there, we found there was an hour and a half wait. We would now be too late for the shuttle train, which was departing halfway across the next island.

It was 7pm and still 36 degrees. The island of Sylt was different in appearance from Romo. While Romo had flat dunes and small settlements, in Sylt the land seemed to rise and fall around expensive swanky restaurants and giftshops. Hot and tired, we abandoned the cycling 5 kilometres from Westervelt. We set up camp for the night, and wondered if we’d ever get our triplet onto a train.

Of course you can take triplets on a train

The woman at the ticket desk the next morning seemed to think we would. She sold us tickets for the tandem, triplet and trailers, two adults and three children without even raising an eyebrow.

Getting bikes on the platform is no problem

Getting the bikes on at the terminus proved easy. The long curved carriage was tailor made for wheeling the triplet on, and we could sit with the bikes. The train was air conditioned and empty. At the station before we were due to get off, a woman boarded with a bike.

“We’re getting off at the next stop,” said Stuart, swinging into action and shouting orders. “Kirstie, when the train stops, you get off with the tandem. Boys take a trailer each. I’ll take charge of the triplet. Hannah, could you just try and get yourself onto the platform?”

Hannah nodded. Stuart smiled at the women with the bike. “I’m a bit nervous about this. Don’t want to leave a child or bike behind,” he said.

“I would be too,” she replied. “I had some friends did the same thing as you. One person got off with the children and the phones and the other was stuck on the train when the doors closed and had to go all the way to the Swiss border!” 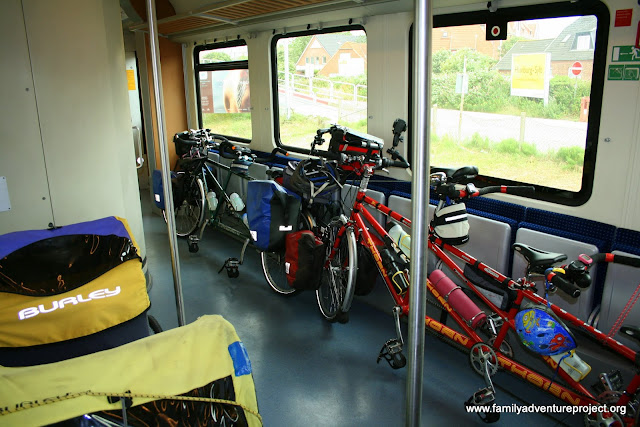 Getting bikes on the train was even quite simple

Filled now with a renewed sense of panic, we waited for the train to reach the station. The tandem was easy. The trailers no problem, and Hannah looked after herself. I turned around and Stuart was still in the corridor with his bike.

“We need to up-end it,” said my sweating husband. Placing Matthew’s body in the middle of the doors and hoping they didn’t shut, I grabbed the triplet and lifted the front end high into the corridor. Moving into the toilet with the back end, Stuart managed to release it from the curved confines of the corridor. Now he was stuck in the toilet with a three seated bike.

“Go that way,” he huffed, pirouetting around sink with toilet paper stuck to his shoe. I moved back around  the corridor, and managed to get the handlebars out of the double doors.

“Heave,” I shouted, tripping onto the platform. The bike spilled out of the toilet, with Stuart clinging on to the rack. Suddenly we were in the centre of the platform, where everyone was watching and no one was smiling. 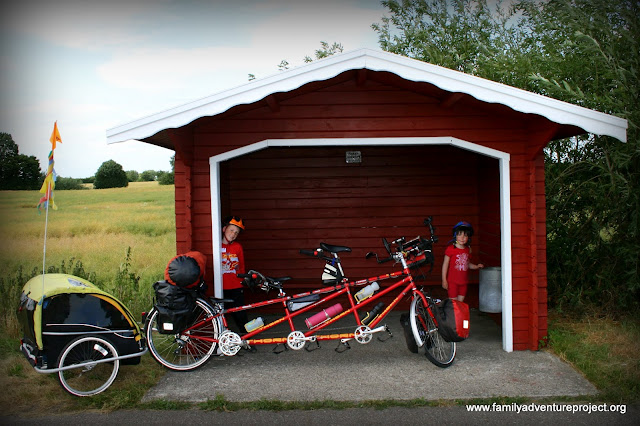 Enough excitement for one trip

Recovering his composure, Stuart gave the guard a cool thumbs-up to say it was safe for the train to leave. We wheeled the bikes towards the choice of a very compact lift, or a long staircase to freedom, thinking our diversion had been exciting enough. We’d settle for a boring flat road for a while.