Did you know 2010 is the Moomin’s 65th Anniversary? Yes, 65 years since Tove Jansson penned the first story that introduced me to the enchanting world of the Moomins.  So you can imagine how excited I was to discover that Moominworld actually exists, in a place called Naantali in Western Finland.  And can you imagine how excited the kids were when I asked them if they’d like to go there for our summer trip? To meet The Hemulen, Too Ticky, Stinky, Little My, Snorkmaiden, Mymble, Snufkin, Hattifatteners and Fillyjonk.

The Moomins? What are you talking about?

If you’re feeling lost reading this, don’t panic. I felt that way reading my first Moomin book as a kid and feel it now when I read my kids Moomin stories at bedtime. MoominValley is an alien place, where the winters are perpetually cold and black, where the arrival of spring has a significance we can only imagine, where the summer sun shines at midnight, and the brief passing of autumn signals the impending return of ice and darkness. It’s a place where nature asserts her authority, seasons are amplified and life takes on strange and unfamiliar forms. And that’s what our summer 2010 trip is about. 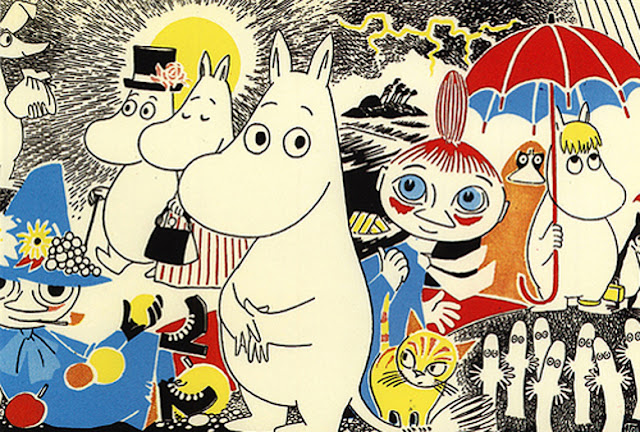 We’re going to meet the Moomins at Moominworld

So, what’s the plan?

Once hooked into the magic of a journey to Moominworld, it took very little persuasion to get the family buy in to the idea of cycling 2,000km there and back, visiting some other strange and unfamiliar lands along the way. And so that’s the plan; biking around the Baltic Sea on a summer of Moomin Madness.

How to get to the Baltics and Moominworld by bike!

We’re heading over the North Sea to Denmark to start our biking in Esbjerg; two adults and three children riding on a tandem and a triplet pulling trailers. From there it’s South across the border to Germany to catch a ferry from Kiel across the Baltic Sea to Latvia. We’re going to spend a month exploring the former Soviet block states of Latvia, Lithuania and Estonia making our way North to Tallinn. From there by boat once more to the mysterious archipelago around Åland where we’ll hop by bike and boat across to Western Finland to reach Moominworld.

There and back again… hopefully

Getting back won’t be easy but we’ve got a vague plan; a ferry to Sweden, a van trip to Malmo and then back on the bikes for a week fuelled by Danish pastries to get us from Copenhagen back to Esbjerg for the ferry home. If all goes well we’ll be back in time for school. If it doesn’t we could be in for a long, cold, dark winter living in fear of The Groke.