The Captain’s Dilemma: Llama Park? Or not?

Matthew is Captain of the Day and the strain is showing even though it’s only 10am. He wants to go to the Raksis Llama Park near Cesis. He did a project on llamas at school and is VERY keen to see some up- close. But getting there means going backwards, the opposite direction to Tallinn. On gravel. And, according to tourist information, STEEP UPHILL. And that’s sure to mean pushing tandems, triplets and trailers up a gravelly gradient in hot sun. So in truth part of him wants to go and part of him doesn’t for after two days of bumping, slipping and straining on gravel the whole team is agreed that gravel roads are the devil’s work. 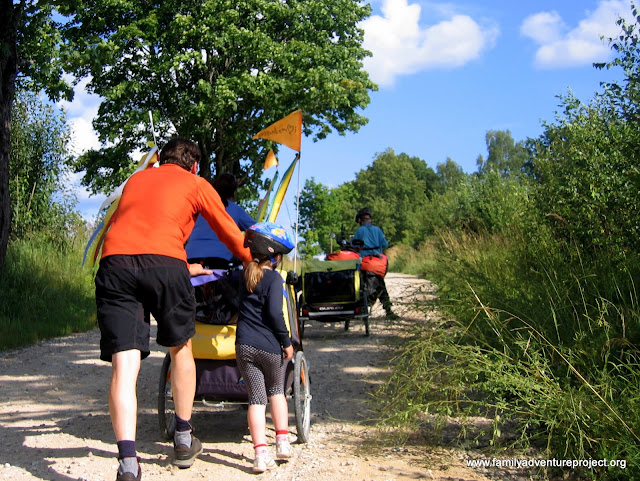 It’s not easy being in charge

I can see he’s torn but I’m not going to make the decision for him.  That’s the point of being the Captain of the Day. Captain makes the final call. Captain carries the can. Captain takes the credit if we have a great day. And Captain gets the blame if it all goes wrong. And Matt knows gravel road, uphill, hot day is not a great plan. But he really, really, really wants to see the llamas. And he really doesn’t want to put us behind or leave a problem for the next day’s Captain.

We were supposed to go to see the llamas yesterday on the way into Cesis but the turning wasn’t signposted. Few are in Latvia. So we missed the road and were hot, tired, fed up with gravel and almost in Cesis before we realised. So we pushed on into town, had a beer, played in the dancing fountains in the town square and forgot about llamas. Well, most of us did. 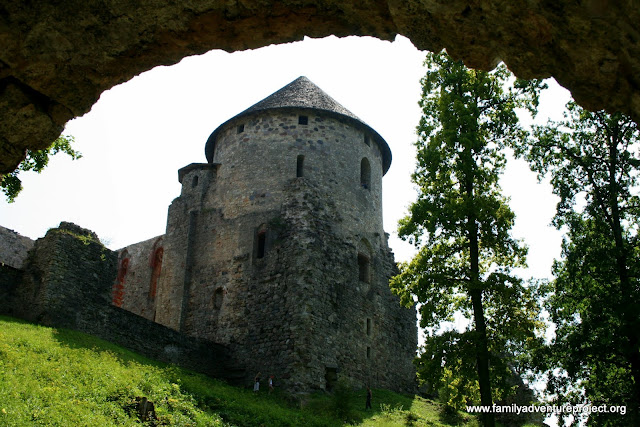 We had fun playing in the park, but it didn’t resolve the situation

How do you get everyone on board?

“Look,” said Matthew an hour later picking up a leaflet in the tourist information centre, “They’ve got Segways Mum, you like those. And canoes Dad. And camels. And it’s a guest house so we can even stay there.”

It’s hard being the Captain, trying to form a plan, get everyone on board, meet everyone’s different needs and reconcile them with your own, especially if you love llamas. But it’s real learning about decision making, responsibility and leadership within the family. It’s hard not being the Captain too, abiding by others decisions with good grace, even if you don’t really agree with them, especially as a parent more used to having the last say.

Matt debated internally for an hour or more, hesitant to make a decision that in his heart of hearts he knew was probably about him and not the team. As restlessness built amongst us at the lack of a plan, he polled the team head on: “Who wants to see the llamas then?”

“I’ll go if you really want to,” said Kirstie.

I told him he just needed to make a decision. 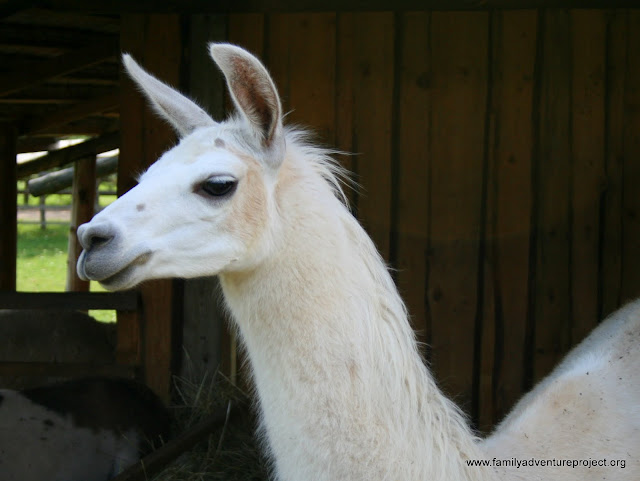 Who wants to go see the llamas then?

Sooner or later a decision must be made

A trip to the supermarket and picnic lunch in the park beneath the ruins of Cesis’ picturesque Livonian Castle put off the final decision until 1.30pm.

The road climbed 5km up and out of Cesis before the asphalt ended and gravel began. As we bumped along an old woman carrying a plastic bucket stopped us to praise the children for their strength and tenacity. As she dug around in her bucket she indicated the gravel continued for another 5km, then handed the children three large tomatoes and left.  We pedalled on, Cameron and Hannah chatting away behind me. “Why did that lady give us tomatoes?” asked Hannah. “I don’t know. Latvia is just weird. Even their signposts are weird. On the way into a village it just says the village name and on the way it’s just the village name crossed out.” explained Cameron.

One kilometre further and the gravel unexpectedly gave way to new smooth asphalt, curving away DOWN a steep hill and into the Gauja Valley. And there, beyond, lay the Raksis Llama centre, on a prairie like clearing in the pine forest, a carpet of green pasture, dotted with wooden log cottages, a playground, basketball court, picnic benches and quad bikes. And alpacas, llamas, goats and camels grazing in wooden fenced enclosures. 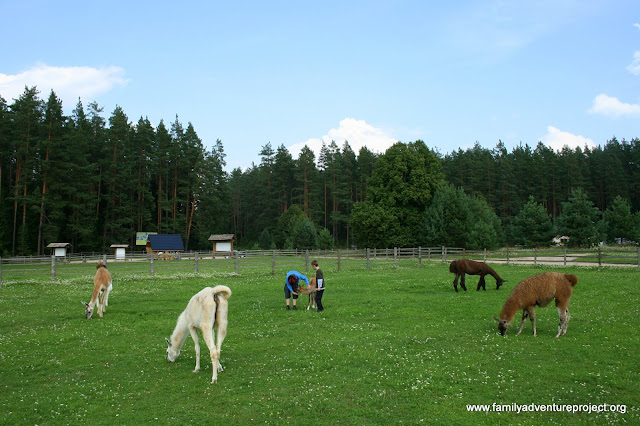 An oasis of llamas in the middle of nowhere

A house, llamas, camels and a canoe

A man on a Segway glided across the prairie to greet us. He showed us two wooden cabins equipped with power showers, soft beds, sofas, saunas and satellite TVs. He asked us which one we preferred and Captain chose the one with the biggest TV.  He invited us to get up close in the llama and alpaca enclosures then organised an evening  canoe trip down the Gauja.

As we splashed, paddled and floated downriver and back to the llama camp, the smiles on everyone’s faces said we’d had a good day, probably better then we expected. Like Cameron said, Latvia is weird (to us) and whether Captain or not, most days you just don’t know how things will turn out. 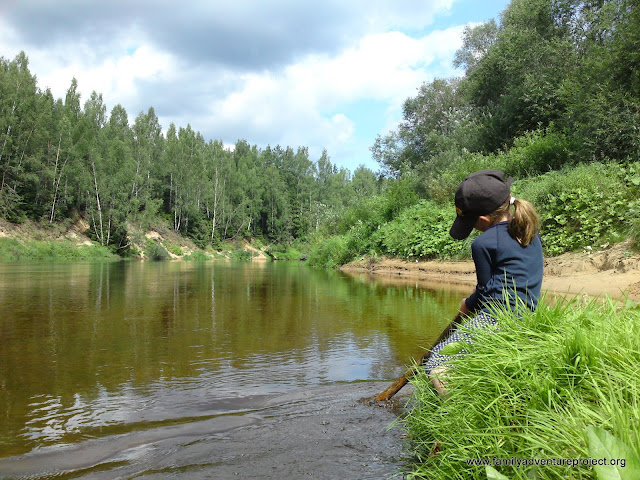 Chilling at the end of a hard day

So, how did the Captain do?

Sitting outside the wooden cabin having dinner, we talked about the day.

“How did you think the day went then Matt?” asked Kirstie.

“Pretty good, in the end,” he replied.

“I thought it was quite good,” said Cameron.

“Yes, because of that hill,” he continued.

“But that was downhill and on asphalt,” protested Matt. 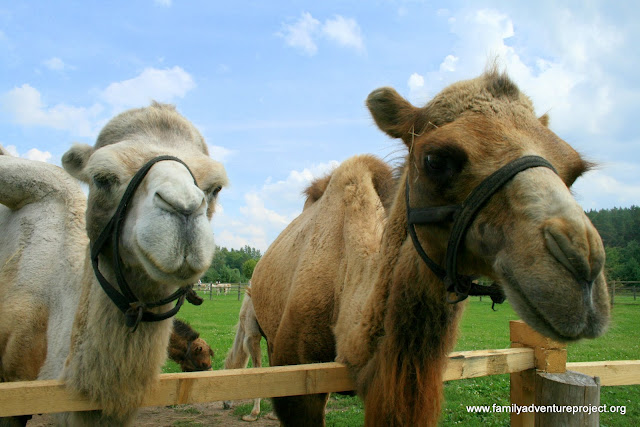 Oh and camels too! Captain’s bonus.