There was a queue building up to get into the driveway of the huge wooden house with sprawling grounds and elaborate wrought iron fencing designed to keep out people like us. Two BMWs and a Mercedes beeped their horns and shouted through their windows. We only wanted to get past the drive on the pavement, but now the tandem and triplet had become sandwiched between the posh cars. There was a game of stop, start as the cars jostled and reversed, and Stuart tried to do a three point turn without jack-knifing the triplet. And then the other cars seemed to fade away as the polished black Mercedes purred through the gates. 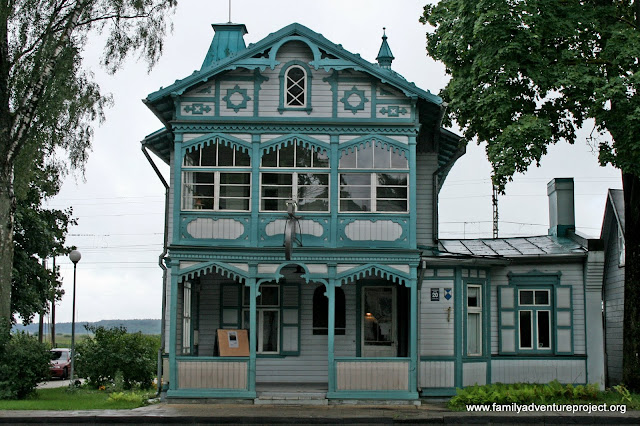 Beautiful wooden buildings like this are quite commong in Jurmala

I smiled at the occupants, as if to say ‘Isn’t this crazy?’ There was a man in the front who kept his eyes on the wheel, and an incredibly beautiful woman in the back, with long dark hair, high cheekbones, skin without blemish and a silver dress, who sat perfectly upright and shot me a look of pity.  I didn’t realise then that I was probably trying to get a grin out of either one of the Baltic’s up and coming popstars or the trophy wife of a Russian Oligarch. 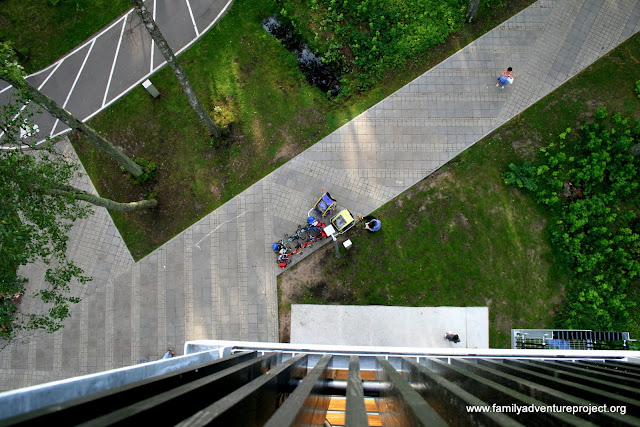 View from the bridge, in the park at Jurmala

On our way into Riga, Latvia’s capital city, we had hit the beach resort of Jurmala. It was the least beach-like beach resort I had ever encountered. The 32 kilometre long stretch of road consisting of 14 townships was set 500 yards away from the beach at all times. We were basically cycling on a dual carriageway in yet another pine forest. Until we came to the wooden houses.

A little piece of Russia?

Jurmala is historically the Russians’ playground, the spa capital of the Baltics and was allegedly one of Brezhnev’s favourite get aways. Aside from the yachts, casinos, beautiful women and dozens of hulking sanatoriums  Russian money has paid for the construction of acres of lavish and fully detached art deco houses in various shades of repair. For once design and architecture is in evidence in Latvia. They are a treat, and all are different and unique, variously sporting turrets, verandahs, balconies, sculpted gardens and other decorative additions.

We cycled around them for a while, until police started diverting us down a wide road, lined with makeshift car parks.  Then we began to go against the flow of traffic and found ourselves in a car commercial. “Look at that one,” cried Cameron, as a bright red Excalibur with alloy wheels drove past us with the registration 666; the number of the beast. With the beast inside, driving. It was followed by a stream of Maserati’s, Porcshe’s, Mercede’s and BMW convertibles.  The boys love Top Gear and had a great half hour squealing every time a particularly flashy one came by. 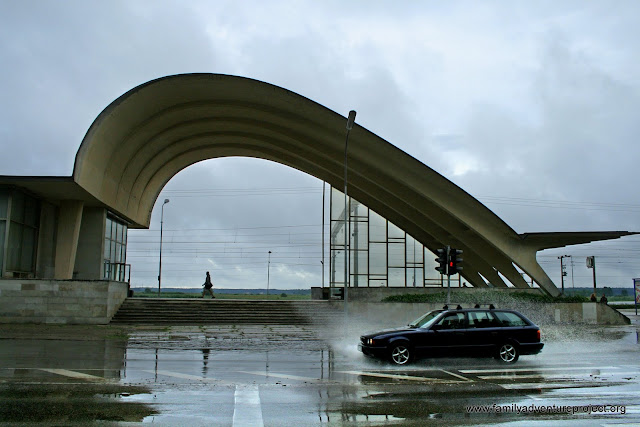 All quiet at the station, but the town was going crazy

I think we gatecrashed a party

Then you couldn’t hear us squealing. We hit the main strip and could hardly move for people. Many of them were wearing tags and trying to make their way along the crowded road and pavement to the low throb of a base and the sound of someone giving everything on a microphone somewhere in the distance. Police were even more visible, as were the beautiful people. It soon became clear from the advertising hoardings and bright lights that we had cycled into the Baltic’s competition for a young pop star, a kind of televised Baltic X factor. And I had stumbled into the middle of it on a tandem; a vehicle that might have the X factor, but wasn’t exactly being envied. 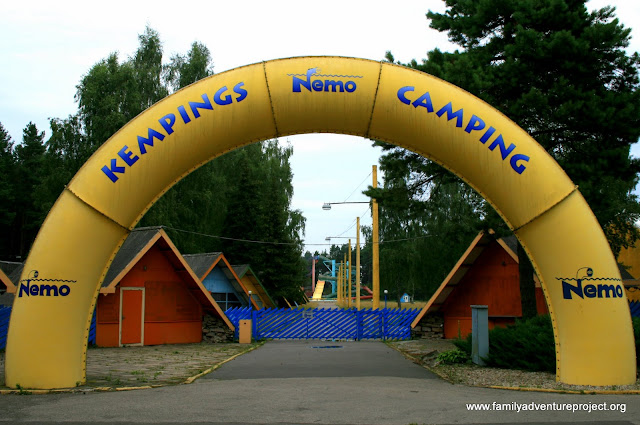 The Nemo Campsite was not quite as advertised.. it was closed.

From the party to the water park

The Lonely Planet guide said the Nemo campsite and water park was a brightly coloured and highly enjoyable experience. It might once have been. Now it was a set from Scooby Doo. The blue and yellow concrete tubes that advertised its presence were still bright and buoyant, and the little blue and yellow chalets were still standing, abandoned. Nemo was a ghost town. The water slides curled above and over an empty dry pool and grass grew up the side of the boarded up ticket office.

But we weren’t sure it was actually abandoned. Most of the Latvian attractions we have visited appear to be shut, even in peak season, and many hotels outside the main towns look like they haven’t had a guest for years.  We called out, just in case a Latvian popped out with tickets to a water park and a number for a tent pitch, but only our own voices echoed around the forest. It was eerie and I shivered. But Stuart was fascinated and insisted on cycling around it. The Nemo park had obviously not been closed for long, but the owners made no effort to clear out, and it was perfectly preserved; in fact it was in better nick than many of the working resorts we had seen. 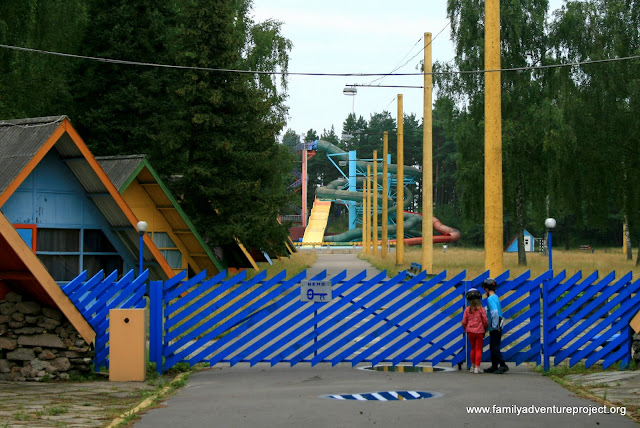 There was a certain Scooby Doo quality to it

From one abandoned campspot to another

“Shall we camp here then?” asked Stuart with a grin.

“Scooby, Dooby, Nooooo,” the kids shouted, as one.

The replacement Nemo campsite was no less quirky, set in the grounds of a huge former sanatorium. 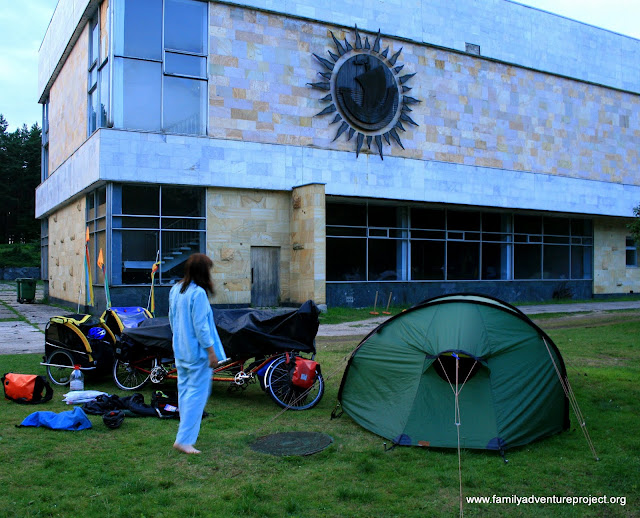 Another strange place to camp

The concrete block with rooms three stories high, huge marbled walls and a massive metal logo, towered over our tent. In the forest towards the beach, perfectly preserved trails were lined with concrete street lamps and a wooden desk and office were still intact at the edge of the beach, an office that had no doubt prevented patients or inmates from getting to the outside world. Curiously, they were allowed to look at the beach through a kind of wooden bird watching house surrounded by dense fencing, but not to run their toes through the sand or bathe in the water. Sea air was obviously good for their lungs but nothing else. 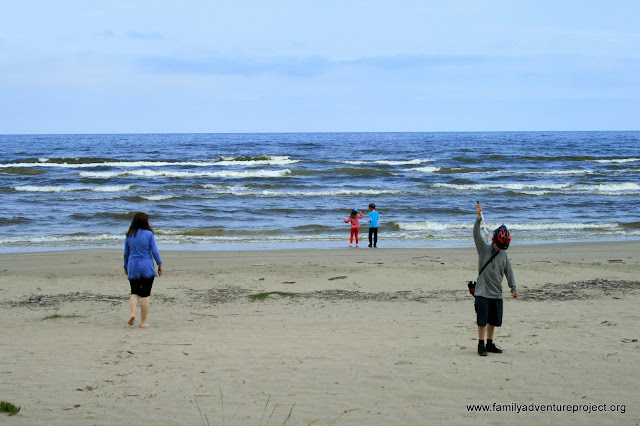 The beach was almost as abandoned as the Sanitorium

Still down on the beach everything was fine

As darkness fell, we swam in the sea, and wandered back contentedly through the forest path. The children yawned and said they were ready for bed. And no wonder. In one afternoon, we became involved in a competition to find the new wave of Baltic pop star, we toured a dis-used water-park like Freddie and Velma, and put a tent up in the grounds of a seaside dinosaur created to cure the problems of the diseased and the depressed. Just another regular day in Latvia. 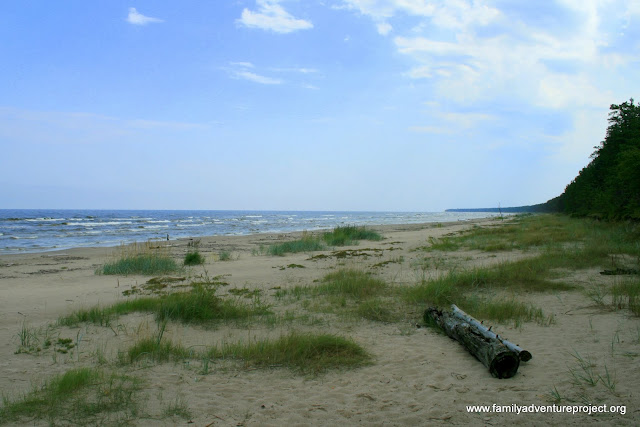