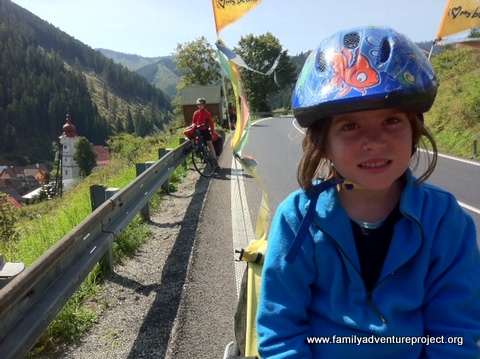 “Dad, what was I up to?” asks Hannah, tapping me on the back from her stokers position behind me on the tandem. To be honest I find it hard to remember, because I haven’t really been giving her my full attention. I got bored somewhere in the three hundreds, preferring to focus on the mountain scenery unfolding around us as we climb, climb, climb. But I think we’re somewhere in the mid five hundreds now.

“Five hundred and sixty six? I venture a guess, certain that if I’m wrong Hannah will correct me.

I remember Cameron practicing his counting while riding tandem with me, maybe five years ago now. And Matthew before him and now he’s touring with us on his own bike. It’s amazing how quickly the years pass and so easy to lose count. Yet counting is such a simple way to pass the time and at the right age such an engaging little challenge; counting up, counting down, in ones, twos, tens and hundreds, you can pass almost a whole day of cycling just playing counting, if you count high enough. And counting the metres up into the Low Tatras to the summit of the Cercovita pass is plenty high enough.

What number was I at? 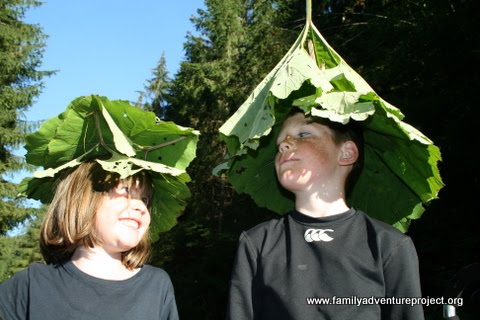 Why are we doing this?

“Dad, why did we PLAN to go up the Tatras?” asks Hannah as we take a rest from the climbing to catch our breath and take a drink. It’s as if she can’t quite believe anyone would choose to spend a day cycling up a mountain pass. And as I haul tandem, trailer and Hannah up a thousand beautiful metres I sometimes wonder myself. In the heat of the climb I’m a bit stuck for a motivational answer so go for a logical one; I tell her we’re going to Poland and that the border with Poland is at the top of the Tatras. It seems to satisfy her curiousity as the counting resumes and questions stop as we resume the climb, at exactly the same number we left off.

There’s plenty of things the kids count on our journeys; how many days we’ve been travelling, how many sleeps until we get home, how much money we’ve spent, how much we’ve got left, how many things you can see beginning with P, how much pocket money they should be getting, how many kilometres until we get there. Where ever ‘there’ is. It’s funny how the kids have mostly given up asking where there is. In years gone by I remember them asking all the time. Where are we going today? Where are we going to stay? What are we going to do? And when they asked I used to think they wanted to know, not just for curiosity’s sake, but to somehow make things more solid, certain, secure; as a counterbalance to the fluid, unpredictable way we often choose to travel. But as they’ve got older I sense they don’t need this so much. That they get that we don’t always know. And that it doesn’t really matter, as experience tells them that everything usually works out in the end. All that really matters to them these days is whether we are camping or staying in a hotel tonight. 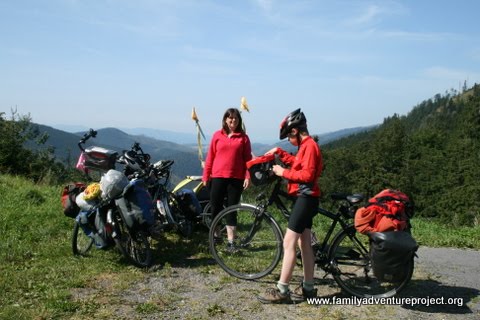 “Seven hundred and seventy nine. Seven hundred and ninety. Seven hundred and …… ” Hannah’s not the bestest at her counting yet, but I do admire her tenacity. She’s been counting for the last 10km intermittently and each hundred has fewer mistakes than the last, especially once we’ve got the difference between a 2 and a 5 sorted out. And while she’s quick to correct me when I forget where she’s got to, I’m reluctant to interrupt her flow even when she makes a mistake. For her mistakes are cute and they won’t be there for long. Kids grow up so fast and this time with them is so precious. A chance to be with them, play with them, enjoy them as they are. For they’re like this, at this age only once, bestest or not.

As we grind around hairpin bends through the dense forests on the flanks of the mountains, Hannah studies the altimeter fixed to her handlebars, concentrating intently on the slowly changing digits, that mark our progress, taking her into numbers she didn’t know existed. As the day draws to an end I’m listening intently now for every muscle burning metre is one less to go. But there’s only one number I really want to hear.
“One thousand, two hundred and thirty two,” she announces as we finally reach the top, views of the bare jagged ridges of the High Tatras unfolding before us as the sun goes down.

“That’s amazing,” I say with a sense of relief and achievement, “we’ve reached the top.”

“Yes, Dad,” says Hannah,. “And I can tell my new teacher that I’ve counted to way more than a thousand.” Which is probably a more meaningful achievement for her than our family conquest of the Low Tatras. 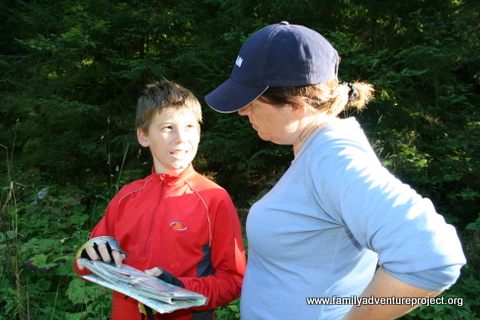 As we collapse exhaustedly into bed in the Penzion at the summit, there’s still something bothering Hannah about this whole mountain business. “Dad, why did they put Poland at the top of the High Tatras? Because it’s not very fair on Poland people. They must be really tired going home every day.”