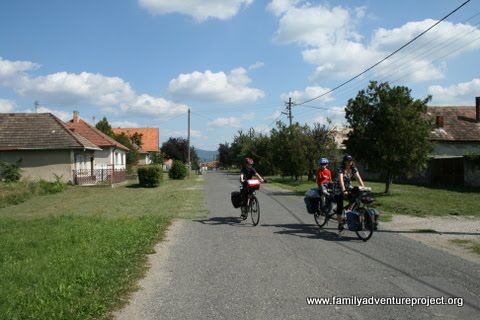 Riding along in the Slovakian sunshine

Riding along in the Slovakian sunshine, through pasture, forest and village, following streams and rivers up and down the gently rolling hills, chasing birds and butterflies, it’s hard not to be in the mood for riding. At least when the sun’s not too hot. Or when the gradient’s not too steep. Or when you’re not too hungry. Or thirsty. Or when it’s not more than an hour to the next ice cream stop. Or swimming pool. Or playground. Or sweety shop. Or grocery store.

Not always in the mood

No, truth be told, we’re not always in the mood and certainly not necessarily all in the mood together. But one of the challenges of our cycling adventures together, as in our family life, and in our attempts at music making, is trying to find that elusive harmonious groove. Our adventures together are not just about physical ups and downs but emotional ones too. 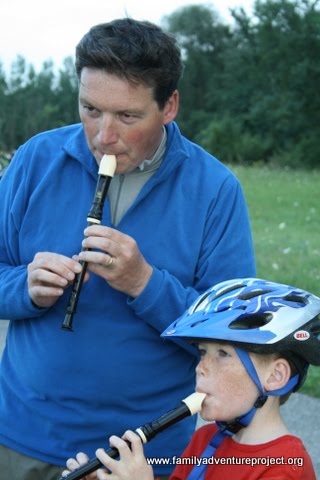 Sadly we’re no smooth jazz band, effortlessly improvising sweet harmonies. No, we’re more a village Oom Pah Pah, puffing away on our instruments, playing our own unique arrangements, gasping for breath when we can, smiling and foot tapping when we think we know the tune and throwing out the odd bum note when we just don’t get it.

It was way back when we were leaving Linz that the first of us threw a temper tantrum. Most of us thought we’d spent the whole morning enjoying the Ars Electronica Center but it soon became apparent some of us had been worrying about moving on, covering kilometres and avoiding bad weather. With a storm approaching, we rode along the Danube until one of us could contain herself no longer, stopping us all in our tracks.

A passing cyclist stopped to see what the problem was. “Are you alright?” he asked kindly, without realising he was entering an explosive family row.

The kids smirked. I smirked. But Kirstie fixed the man to the spot with her stormy grimace.

“Oh, this weather…. It is very very nervy,” said the man, trying to extricate himself, “but if you go and shelter under the bridge it will be better.”

It wasn’t. But the storm did pass. 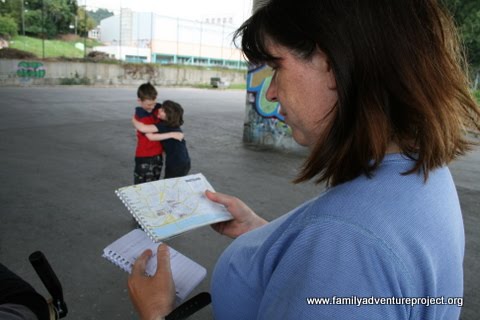 Lost in Bratislava? Maybe. So what?

Of course it’s different things for different people. While making miles and keeping to schedule have become Kirstie’s bag this year, she seems less affected by the kids behaviour than I do. Catch me at the wrong moment and all you have to do is splash a drop of coke on your t-shirt or a tablecloth to trigger a temper tsunami.

You’d think I was OCD, the fuss that ensues, “Are you incapable of even having a drink? Do you need a baby bottle? Why don’t you just drink it out of the glass?”

I don’t know why it gets me so. Perhaps it’s the waste of that thirst quenching liquor, or the fact they’ve just soiled the only clean t-shirt they’ve got left, or just that I’m overtired from hauling a tandem and trailer up a 12% hill. But in the moment I don’t care, I just let fly.

“Put the top on your bottle. Get a napkin. Wipe up that mess. NOW!”

If I raise my voice too much it’s sometimes enough to make Hannah cry, which is when I usually realise I’ve gone too far. Although sometimes I’ll get as far as decreeing, “That’s the last drink you’ll ever have!“

Of course it’s not. We’ll all be having coke and ice cream again in an hour if we can find a place. And we often do. If we cycle far enough in the right direction. 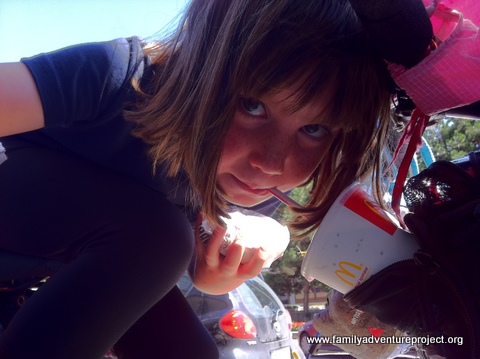 Thirsty? We can drink on the go with this arrangement.

There’s some things you just don’t complain about..

Strangely the one thing the kids never complain about is the cycling. We can ask them to ride 70km in a day, to ride in the rain, in the dark, in the heat or the cold and they just get on with it. In fact the more of a squeeze we’re in, the more they rise to the challenge. It’s a trait I find deeply admirable in all of them and we’re careful not to exploit. Matthew, riding solo this year, has shown great strength, determination and stamina, without a word of complaint.

“Well, you asked me if I wanted to ride by myself this year,” he explained to me over an unspilt drink, “and I applied for the job so I can’t really complain about it.”

It’s the kind of maturity I often see in kids when you invite them to step up and take responsibility. But while my three are little touring pros, like their parents they’re not angels nor superhuman. They’re quick to let us know in their own sweet ways if they’re too hot, too cold, saddle sore or tired. But (touch wood) there’s never been a hint of pedalling mutiny, no, not over the cycling. Although we have come close because of cherry MOAMS; little chewy cherry sweets which have the ability to create incredibly extended discordant scenes. 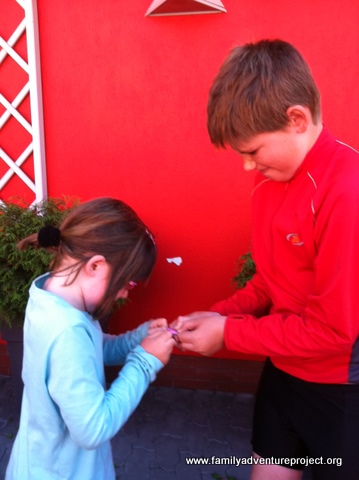 Everyone wants the cherry

You see in a MOAM multipack there’s only ever one pack of cherry sweets. Which everyone wants, because “Cherry is the bestest”. Which means that no-one really wants the strawberry, lemon, raspberry or coke, at least as their first choice.

Now each little pack in the multipack contains five MOAM sweets. Which of course inconveniently doesn’t divide by three. So even if the kids manage to agree that instead of one person getting the whole pack of tiny cherry chews it should be split between them (which is like a major negotiating achievement in itself), there are always going to be 2 left over which means someone has to go without one. In efforts to resolve this issue the kids have devised the most elaborate choosing, sharing and awarding games, some of which have been known to last for two hours, before being declared unfair in some way, usually by the person who ended up with one less cherry MOAM.

Of course while all this is going on, our progress is delayed which brings Kirstie into the fray, while I blow my fuse over the frowns, sulking and grumpiness which accompanies the arbitration I am then forced into to get us all moving (which usually involves me consuming any cherry sweets which are the object of dispute). Of course once on the move again, the little chewy things are all finished and forgotten in a few minutes. At least until we open the next multi-pack.

Much like being at home, this kind of travel brings its own particular challenges into focus. Here we’re in each others company 24/7, dealing not just with the challenges and joys of being with each other but also those of the cycling, the different languages and cultures, the different places each day, the heat and hills and tiredness. And unlike at home when if things get tough we can hide in our bedrooms, run off to work or school, disappear off and grumble with our friends, on this kind of journey when the going gets tough, we can’t get going until we’ve dealt with it.

Our very own mood music

And so it is in our musical journey too. Our work on creating musical harmony has continued in the background, in sunshine and rain, in good moods and not so good ones, sometimes with everyone joining in and sometimes with a little silent protest.

But you know what? Protest? Disharmony? Discord? Discontent? It always passes. And slowly and surely I do think we’re putting the harmonies into our Blue Danube tour.