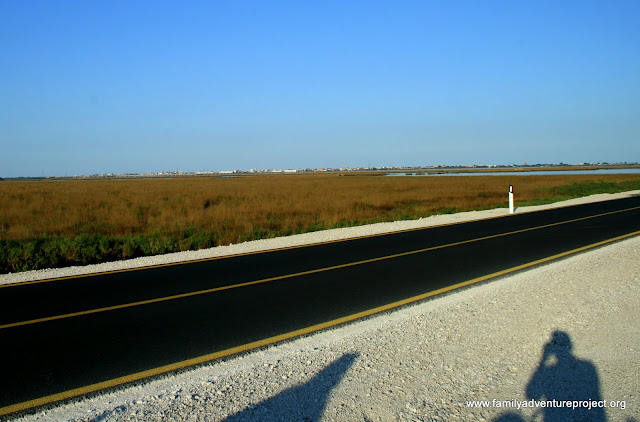 This was a pretty road, in the rare moments when it wasn’t packed with two lanes of speeding traffic

Cycling in Venice: the battle of the shades

Each time I jumped the handlebars wobbled causing us to weave a more dangerous path along the tarmac strip of land that passed as a two lane road. I wanted to keep us in as straight line, make our movements as predictable as possible to passing traffic. Twitching was dangerous and my stoker sensed it too.

Everything they say about Italian drivers is true

“Dad, what are you doing?” Cameron shouted at me nervously as another car honked and we veered towards it as it rushed to overtake. “Why do they keep honking?”

It’s not something we’d experienced much of until the last couple of days but as we approached Chioggia hoping to catch ferries to the southern Venetian islands to reach Venice by the back door, it seemed everyone was hooting. I’d like to think it was a gesture of support, saying ‘well done for getting so far’, applauding our ‘beautiful family’ and our commitment to human powered travel, and certainly the waves, stares and photographers hanging out windows suggested friendly intent. But more prosaically most were just honking ‘Watch out, we’re coming past.’ Close. And very fast.  If the volume of honks showed support, the speed and passing distances revealed a fundamental lack of respect for cyclists.

Not so romantic Venice

It wasn’t quite the romantic approach to Venice I had imagined.  There was nothing on the map to suggest a minor backroad across the lagoon towards Chiogga would be a death trap for cyclists. But then I knew nothing of the volumes of traffic drawn to the Veneto Lagoon, to Venice itself and to the strip of umbrellas, loungers, bars and campsites that choke the Adriatic near Venice. 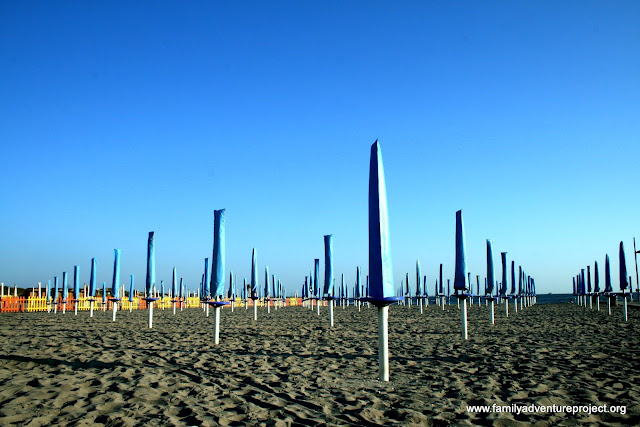 The beach at Lido is usually a little busier than this

For days we’d been wondering why the Northern Italians towns and cities we’d been passing through were so empty but arriving in Sottomarina it all became clear; Italians love tacky, parcelled up, all inclusive seaside resorts. After dicing with death for an afternoon we spent the night on a small sandy pitch at a 3* campsite, advertising its own private 20m stretch of access to the Adriatic.

Not quite the celebration we were looking for

“You get free use of a beach umbrella” the lady explained as we checked in at 9 p.m. In the dark. At a cost of 50 euro.

We also got free access to the Barbie Doll disco which began at 10.30 p.m. and kept the camp kids entertained opposite our tent into the early hours with special karaoke Italian versions of Black Lace, Cotton Eyed Joe and the Hokey Cokey.  We arrived glad to be alive but the feeling was soon waning.

Can you take a tandem on a ferry to Venice?

A new day brought more tough choices, the lady at the campsite casting doubt on our plan to take tandems and trailers on the ferries to Pellestrina, Lido and onto Venice.

“They are small boats,” she explained shrugging her shoulders, “Maybe but maybe not. You will have to see.”

The shrug of the shoulders cast doubt deep into my psyche. What if we couldn’t get on the ferry, or worse if we got on the first and second ferries but were refused the third and had to ride all the way back. Should we retrace our steps on the yesterday’s road from hell? Or try and negotiate a private boat crossing direct to Venice? Or ring the man with a van who’s due to pick up our bikes and take them home and completely re-organise our rendezvous? With a weeks worth of hotels and travel arrangements all made in advance now was not the time for this kind of uncertainty.

Only one way to find out

It’s easy in these moments to take the easy out but somehow it’s not in our nature. At some level I think we relish the greater sense of adventure that comes when you pursue the more uncertain course. We cycled through Chiogga like bubbles in a bottle of aqua frizzante, rushing to escape the chaos and catch the ferry, dodging café tables, market stalls, pedestrians, mopeds, cars, buses and vans all weaving around trying to avoid each other and get somewhere very important.

We arrived at the ferry terminal in a sweat. As Kirstie approached the ferry hand started to wave her through.  Until he saw the trailer. Then he shook his head. By the time he caught sight of the second tandem his hand was already raised to a firm STOP gesture. He shrugged his shoulders “You will have to ask the captain.” I tried to read his eyes to see what the likelihood was but all I could through his dark Dolce and Gabanna shades was my own anxious reflection. 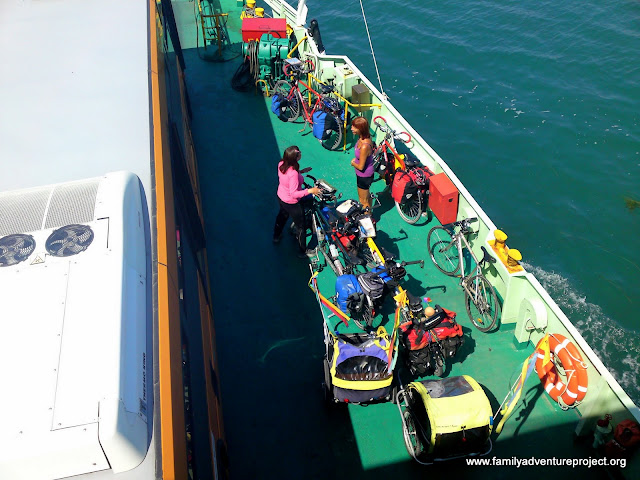 The bikes were no problem on the larger ferries, it was the smaller ones that worried us

In the captain’s hands

The captain arrived. More D & G shades, clean shaven with a crew cut, his immaculately pressed short sleeved shirt showing off strong bronzed arms, a picture of Italian style. I wondered how I might persuade him, me unshaven, dressed in my dirty black shorts and t-shirt, with tangled hair overgrown after six weeks on the road, trying to look cool in my 4 euro Tesco mirror shades. There was no point trying. This one was in the lap of the Gods. He looked us up and down, surveyed the load and took pity on us in a cool and business like fashion. And so the door opened to Venice. 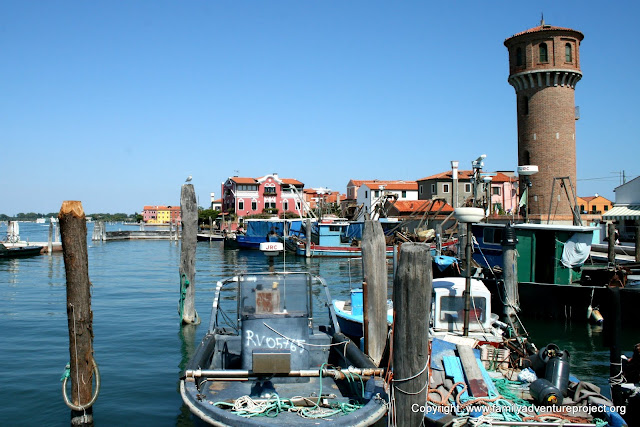 The islands of the Lagoon are a prettier approach to Venice..

The ride along Pellestrina and Lido was picture perfect with little traffic, on quiet roads through sleepy Veneto villages. No more nightmare, the approach to Venice finally took on the dream like quality it had always had in the naiveity of my mind. Riding abreast we pedalled along as a family with the Adriatic on one side and the famous lagoon on the other. There cannot be a more picturesque and perfect way to approach Venice.

We made it across Europe by bike…

We peered across the deep blue waters to the car-less pedestrian paradise of Venice, imagining the personal glory of our final arrival after 44 days pedalling 1,900 km across Europe. As we hopped across to Lido and to the final ferry terminal for Venice we slowly realised it was all going to work out. Our journey would end as it had begun, among the canals of a great European City. From Amsterdam to Venice by bike; two tandems, two trailers, two adults, three kids and a dolly. This family had crossed Europe by bike.

We made it, from Amsterdam to Venice by bike