Can we go on a package holiday next year?

A few weeks ago I found myself apologising for the state of my living room to a man selling dodgy fish. And since then things have got worse. Much, much worse…… Life has become a travel planning nightmare.

The office has become Map HQ

Maps, books, guides, notes… out of which an itinerary must emerge. Eventually

Actually it’s more than maps. More like paperwork HQ. There’s so much of it that the recycling is getting mixed up with important documents, while schedules and itineraries for individual countries are beginning to form an international carpet of scribble. Meanwhile the kids rush in and slide over it, scattering passports under the piano. I think I managed to retrieve them all. 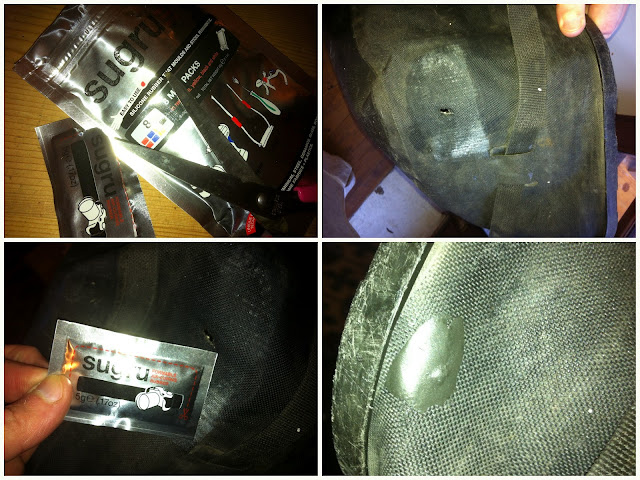 A packet of Sugru arrived a few weeks ago to provide a magic solution to tired and broken stuff. We have a lot of tired and broken stuff. Stuart has so far patched up several panniers, two bar bags and my cycling shoes and there are many other trip accessories on his hit list. It’s saving us a lot of money on new stuff, but the breakfast table is covered in kit in various stages of drying out, there’s nowhere to eat our cereal and I  worry at nights about someone passing the sugru instead of the sugar before everyone is fully awake.

All the nuts and bolts are driving me nuts

Thanks to the good people at Thule, a shiny new Back Up car storage box now sits patiently in the hall, waiting to be loaded. But there’s no such order in the kitchen. Several tool kits are flung wide open while we cobble together a bag of spares including cables, leeches, brake blocks and spare bits of chain. I have to be careful not to put the wrong kind of nuts in the curry. Meanwhile, as we struggle to make the Mondeo roadworthy for Iceland, we’ve now acquired GB stickers, spare number plate, his vis jacket, jump leads, petrol can and for some reason, a fire extinguisher. Must be something to do with the volcanoes.

The shed has become Bike Central

I daren’t even ask what’s going on in here…

For a brief moment it became a crime scene after thieves broke in and stole Matthew’s bike. Fingerprinting threw up nothing in the way of a sustainable transport suspect and the bike has gone for good. This meant panic as we urgently tried to source a bicycle small enough for Matthew that was able to tackle Iceland’s gravel roads. The Raleigh Jaguar he had has been discontinued, but thankfully we managed to get hold of a Dawes Karakum in a small size. Of course the insurance claim added to the paperwork in Map HQ, and the new bike means there will be extra bits and bobs descending on Tool City and even less room in the shed.

The bedroom has become a Charity Shop

There are clothes everywhere. Matthew starts a new school the day after we return from our trip so there is also a full set of new school uniform lurking around. Since last year Hannah has grown out of all her things and in to Cameron’s. But Cameron hasn’t yet grown out of his or into Matthew’s. So who do I give the cycle shorts to? I’m sure this never happens when you Thomas Cook it? From experience I know that I can only select the stuff for packing when it’s all laid out in front of me. Unfortunately it’s all laid out in front of me in every room in the top half of the house.

The living room has become a social networking site

Each summer we need to reassess our comms and tech as things just keep moving on. This year we have added Punkt to our social media strategy. And extra computers, cables and data cards to our inventory. I don’t get involved in the tangle of tech. I just dust around it.

The car has become Starship Enterprise

Don’t be alarmed, I’m assured the kids will travel in the car and not in the box

The car is gaining gadgets and accessories all the time; including a tin can charger, a base for the Back Up box, new number plates and indicators and tandem roof racks. It’s starting to look less like a Mondeo and more like an RV. It’s still recognisable as our car though by the missing hubcap. They cost £34.99 and we are too stingy to shell out.

Why do we need all these HQ’s?

Does your house descend into this state before you go on holiday? I can’t imagine it’s as bad as ours. Every year we have this month long mad rush to buy kit/service bikes/pack bags /clean house for rental and the million other things we do on expedition. And every year I wonder why we do it. What’s wrong with a Thomson package holiday? The kind that normal people go on.

Actually I’m not sure I’ve ever really had a package holiday. My parents, who went on annual holidays to seaside places used to do a bunk somewhere else. Even my honeymoon involved thousands of miles of cycling. But I know I could lie on a beach as well as the rest of them. I just know it. I’ll have to start lobbying now for next year. Spain, Italy, Croatia, wherever. Bikini in the suitcase and onto the plane; spare spokes in the tool kit left in the shed. That’s how my package deal will pan out. But don’t tell Stuart. Not until it’s booked.

This post is part of our 2012 Iceland Season.  We visited Reykjavik in April for the Children’s Culture Festival, then spent a summer exploring the wilder parts of the country expedition style by car and bike.  We’re grateful to Visit Reykjavik, Icelandair and Icelandair Hotels, Reykjavik Excursions and The Blue Lagoon for their support in helping bring you this season of posts from the Reykjavik Children’s Culture Festival.