I heard a rumour that Team GB were in Kendal for a selection day. Yes, the British Bouldering Squad! Yes, at the Kendal Climbing Wall!  The very town that nurtured Wainwright, mint cake and a quality hat shop is now reaching even further by shaping the climbers of the future. So I headed down to Kendal’s Lakeland Climbing Centre (also known as the Kendal Climbing Wall), where the best in the UK have topped out… 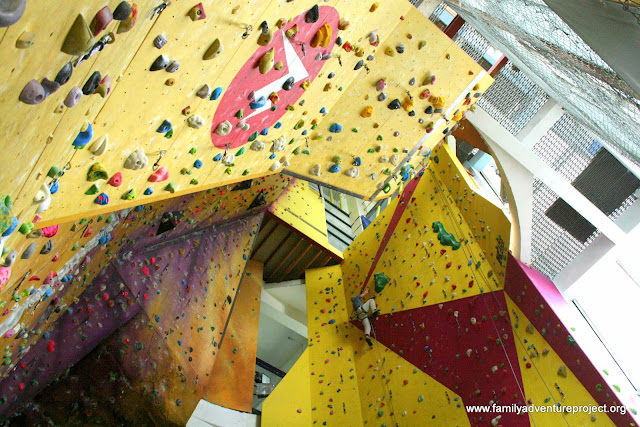 At the Kendal Climbing Wall 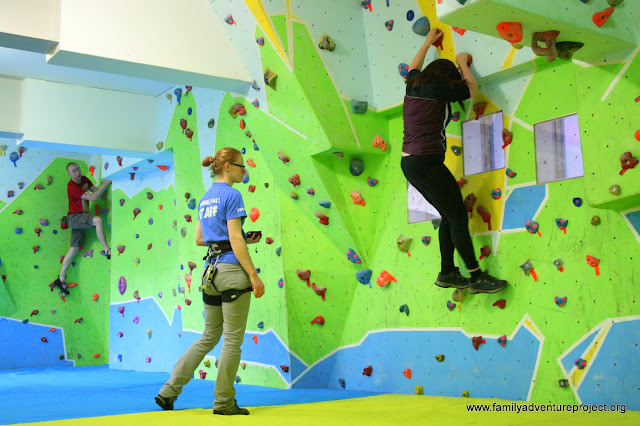 The Bouldering Wall… just hanging out!

I don’t ‘get’ climbing but when I heard Team GB had been warming up on the wall in Kendal I just knew I had to have a go. How could I resist following in the footholds of elite athletes? And more to the point, how would they be able to resist me in harness and climbing tights? I may have vertigo but I was not going to be put off by a 25 metre wall. 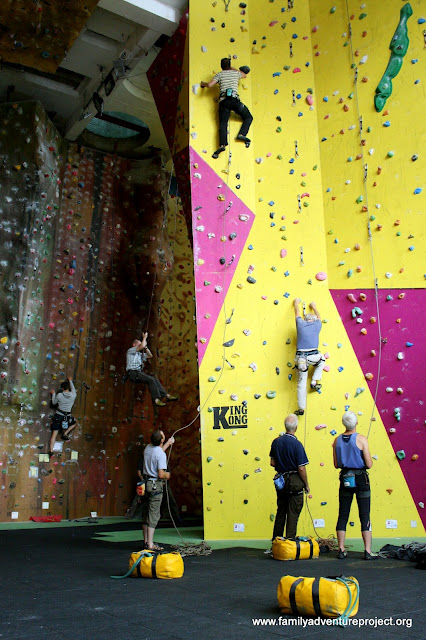 To me a 25 metre wall is a definition of vertigo

I need a little help to get started

First things first. I’ve never done any climbing so I need a little help from the staff at Lakeland Climbing Centre. While the kids have been known to hit the wall on holiday, I’m usually shopping, although sometimes I do agree to stay and belay one of them. Belaying is fine. When I’m belaying I feel powerful. I feel responsible. I feel like the parent I was always meant to be; multi tasking away with a life in my hands, instead of standing over the hoover wondering what melted the belt. 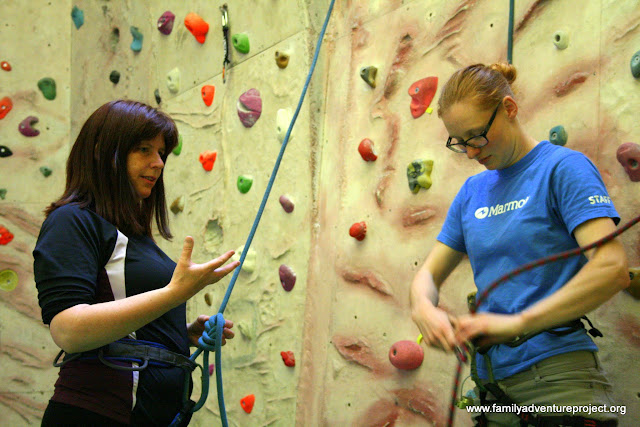 “So, what’s the rope for again? It hurts my hands.”

The thing is, I’m no Julie Andrews; I’ll never climb every mountain, especially if there is a little train to take me to the top. I’m definitely on the lazy side and hauling myself up something that has no cafe at the summit always seems a pointless exercise. Until I meet my instructor Katy, and get bouldering on a baby training wall. 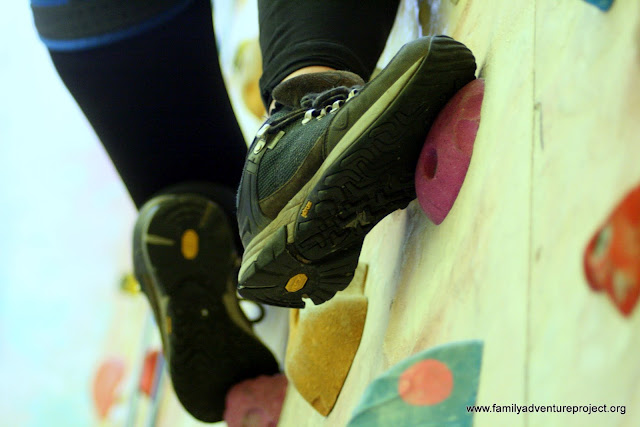 Lift off – I’m off the ground

I call it a baby wall as it’s only just higher than me. But its a good place to practice balancing on narrow footholds, reaching out for coloured nobbles and bobbles and falling onto soft crash mats. 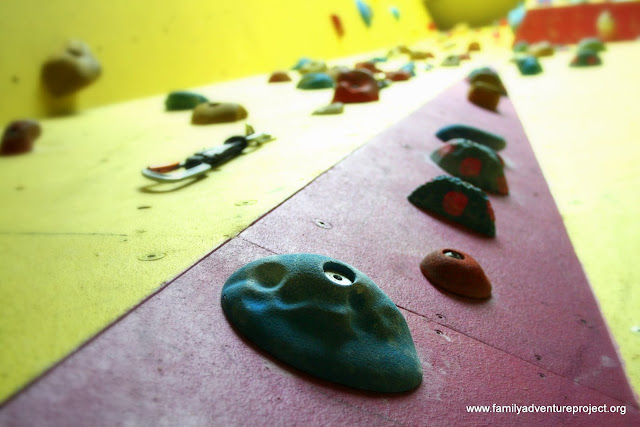 Amazingly, after just five minutes, Katy declares me ready for the main wall. We rope up, and I tentatively launch myself onto the first of the red footholds (the easiest ones). Picking a course and following it vertically is trickier than I imagined and tiring too. Soon I’m stopping for rests and sweat is making my fingers slip off the holds. I never realised before that fingers could sweat. And it’s not just my body that needs to be in gear. I have to keep thinking one foothold ahead and anticipating the next reach. I have unflagging support (mental not physical unfortunately) from Katy Forrester, Climbing Instructor at the Kendal wall, who is belaying me. If you heard her compliments you’d think I was more talented than I look, and definitely more graceful…

With almost as much grunting as childbirth, I get to the top of the wall. Hooray. 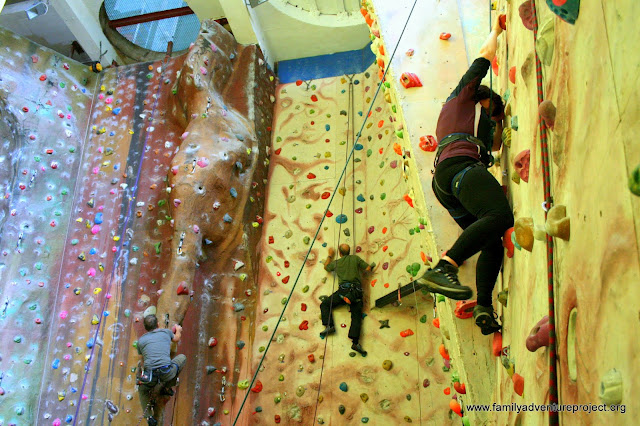 I grunt my way to the top… with surprising determination

Just looking at the main wall makes me dizzy

But while Kendal has the tallest wall in England, and has recently won a clutch of awards including a Silver Visit England award for Excellence. I’ve only done a tiny part of it. This is what the main hall looks like from the top. Are you feeling dizzy yet? 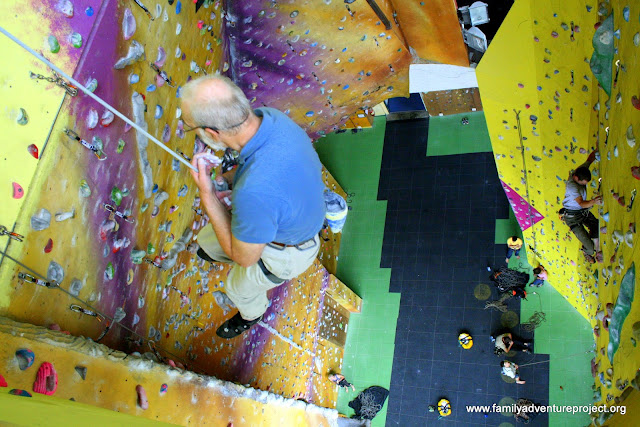 Looking down from the top. (I used the stairs!)

As far as difficulty goes, Katy tells me I have conquered a ‘three’ and a ‘four.’ Maybe I am fantastic- the professionals are only on an ‘eight,’ and if my sums are right, that’s only four notches away.

Today I’ve been climbing right next to where the British Bouldering squad recently put their chalky feet. Katy says that climbing alongside the professionals is one of the great thing about indoor climbing in Kendal, which is now overtaking outdoor climbing in popularity. “It’s aspirational. The guys that come in with the kids club watch the guys climbing on the main wall and think ‘We want a go on there.’ You’ve always got something more to achieve. You’ve always got something to move up to.” 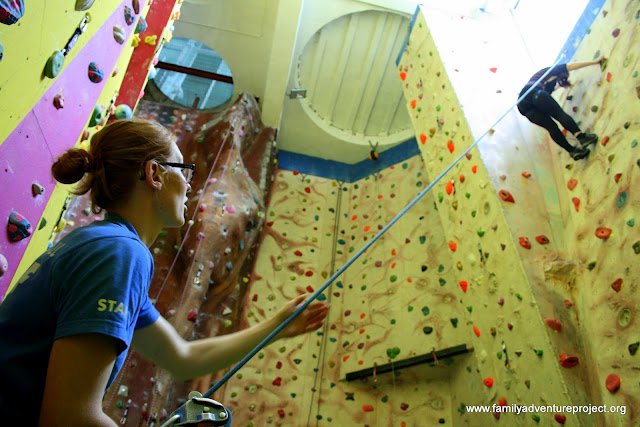 The climbing centre has climbs of international standard

At 25 metres high, there’s still a lot of wall that I couldn’t even throw a shoe at. I visually take in all the multicoloured studs on the main wall. Katy tells me that while they might look randomly placed, they’re actually like mathematical equations that rise in difficulty. Top international setters are hired by the centre to make the routes as varied and challenging as possible, and they’re regularly changed. Like real life, the routes are made harder in the winter to meet the needs of those interested in serious training. 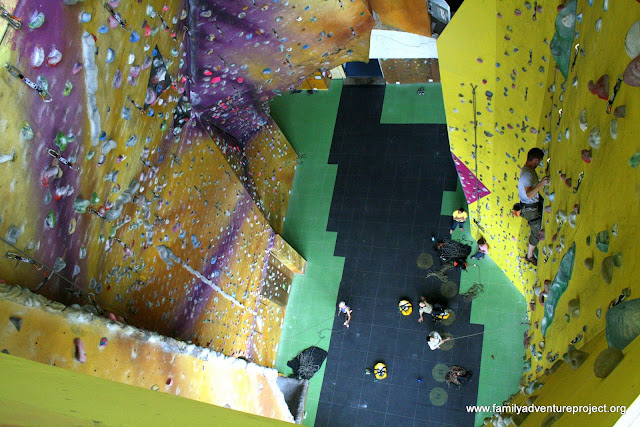 There’s routes for every grade.. from beginner to Olympic athletes

I’m not sure I’m up for a really hard winter climb. I think I’m a summer kind of climber, and perhaps only in an Olympic year. But I’m keen to get back on that wall. I think I could manage a ‘five’ if I practice hard. Team GB, you have inspired me. Lakeland Climbing Centre, you have given me the push I need. When I come back from Iceland, I’ll bring the kids. Cameron would scale this wall like a monkey on a motorbike. We may be too late for topping out on an Icelandic cloud, but it’s a good place to come as a family on a rainy Saturday in Kendal. And believe me, there are many rainy Saturdays in Kendal.

Have you had a go at an Olympic sport this year? We’d love to hear about it. Click comments below and join the conversation.

This post is part of our Family Adventure Capital Season. We’re exploring different ways families can adventure together in and around Cumbria, sharing ideas and inspiration to encourage families to get out, get active and adventure together. Got some ideas for things we should try? Let us know.
You might also like these other posts about adventures in Cumbria: