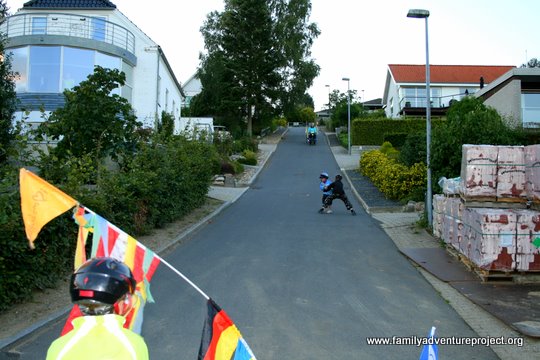 And who said Denmark was flat?

We had no intention of diverting from our route. It was nice, if a little dull. Denmark was consistently an uneventful combination of flat riding, pleasant weather, Viking centres and cabins available on campsites at the end of every day. But then we bought a vanilla slice at a bakery near Middlefart. On the back of the empty paper bag was an invitation we couldn’t resist. Actually, it was an invitation we couldn’t read. Something about a child going free with an adult if the adult joined the Krummiclub. But the picture on the back was clear. There was a family, and they were all having fun. We hadn’t had any real fun for a while and if there was some on offer, we were going to sniff it out.

First we had to find out what a Krummiclub was and if we were eligible to join. Then we had to find out how on earth to get ourselves to Legoland Billund when we had to be at a ferry in Esbjerg in three days time to return to the UK. But how could we not go to Legoland, on our tour of the country where Lego was born? 70% of the bright plastic blocks are still produced there and our kids love Lego.

Who said Denmark was flat?

Once we changed our route, the terrain changed with it. It started to get very hilly. After two days of climbing and dropping, our legs were tired. On a road leading to the town of Kolding, we were still going up, and we stopped at a Best Western hotel to have a drink and a rest. It was getting dark, and time was of the essence, because if we didn’t reach the campsite soon it would be closed. Even a drink at the hotel was more than we could afford, so we made a secret picnic behind the bikes on the gravel drive and hoped that no one would notice. A man sitting outside the hotel noticed straight away.

“Just a few more hills to Kolding,” he said.

“This is the hilliest road in Denmark.” Stuart slapped some salami into a piece of bread.

“Of course it is,” he muttered.

The hilliest road in Denmark soon turned in to the hilliest town. And the campsite was two miles out of town, up another hill. It was dark. We were exhausted and the fact that we were now two paid up members of the Danish Krummiclub didn’t ease the pain. Perhaps this was partly because we still had no idea what a Krummiclub was. In the morning, the hilliest town in Denmark soon turned into the most confusing town as we got lost and circled around and around it. Then someone turned on the wind. 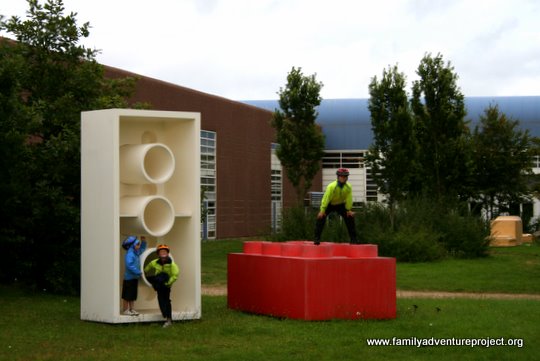 We knew we were getting close when we came across these

We limped towards Billund and the Lego village just outside the town centre at dusk. The children soon cheered up when they caught their first sight of a giant size Lego brick, eight feet of white plastic. They climbed onto it for a photograph. Behind them, the factory stood silent, stacked to the roof and windows with thousands of packs of new Toy Story kits, ready to be shipped out for Christmas.

If Lego is a symbol of playful Denmark, then none of its cheer had rubbed off on the Lego village campsite. We reached the reception at nine minutes past seven after two days and a hundred kilometres of hard slog. It was almost dark and about to rain. Although it was clear we were in need of help, the receptionist wouldn’t open the doors.  It shut at seven. Then when she came out to go home a few minutes later and headed to her car, she wouldn’t hear our sorry tale.

“We are open at nine o clock tomorrow,” she told us.

“It’s a bit late then to get a bed for the night,” I said, exasperated, as she shrugged and climbed into her car.

“You can put up a tent if you want to,” she said, before driving off.

We stood in the dusk in a deserted lego village.

We were past the point of wanting to put up a tent. We wanted a bed, and some warmth.

“There’s a hostel in the Lego village, I’ll go and check it out.” I said.

Unfortunately the hostel closed at seven o’ clock as well.

“How can an entire tourist village at one of the world’s most famous theme parks shut down at seven o clock in the evening?” said Stuart in despair.

Campsite closed, but what about the Lego Hotel?

Phoning the official Legoland hotel was more a last ditch attempt to rule out all the options before we camped than a realistic solution. But the man on the phone said they had a room. And the price included breakfast, and tickets for Legoland. And we could afford itat a push. We put it to the children. But instead of grabbing the idea with both hands, they were cautious.

“It is a bit beyond the budget,” Matthew finally admitted.

“And we’ve joined the Krummiclub now,” said Cameron., “we really should use that deal.”

“The hotel is a long way!” cried Hannah.

But Stuart was captain for the day. “We passed the 2000km mark today and we are going to stay at the Legoland Hotel.” 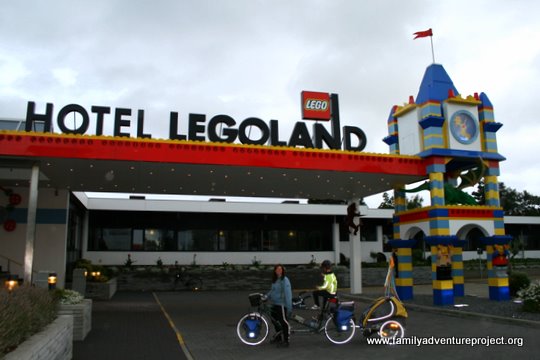 It wasn’t difficult to spot. The massive Lego clock outside gave it away. And the tree climbing up the centre of the hotel, and the train going through the middle, and the pink throne outside the toilets, and the giant lego bricks sticking out of the wall, and the Lego Mona Lisa in her frame, and the water pipes filled with blocks. And the tubs of brightly coloured Lego bricks absolutely everywhere.  At the check in the man was welcoming, and remembered speaking to me earlier.

“Yes, I have a room for you. Two adults and two children?” he confirmed.

“Three children,” I corrected him. His face darkened.

“I thought you said two. I’m afraid the price I gave you was wrong.” He got his calculator out and was half way through the calculations, before he stopped. “It is late. We wouldn’t sell that room anyway. And your youngest child is very small. I can let you have the room at the price I quoted.” He punched in our details and five shiny cards for the Legoland theme park spewed out. “Now, would you like an adventure room or a room overlooking the park?” 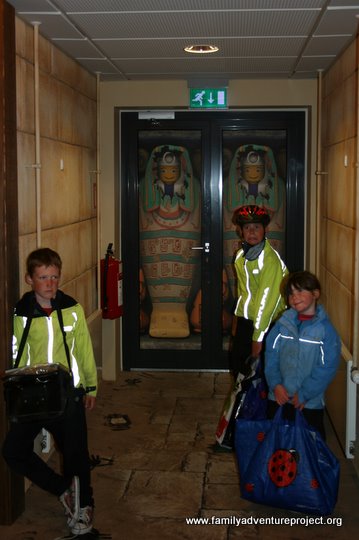 Even the corridors were something of an adventure

We followed a long corridor, with flickering lego fire torches on the wall. We stepped over the bugs and spiders and snakes woven into the carpet, and counted the numbers on bedroom doors painted with hieroglyphics. At the end of the corridor, next to two mummies, was room twenty five. We opened the room and walked into the world of Indiana Jones. A carved column of the sun gods in the centre of the room had a TV built into the top. The beds were painted with ancient codes. The mini bar was cased in a treasure chest and there was a giant treasure map in the wall. A huge monkey made out of Lego presided over it all, while Lego butterflies, parrots and lizards hung from the walls and ceiling.

Next to the beds was a safe. A note to the children announced that if they cracked the code they could find the combination and open it. They counted the legs on bugs and the wings on parrots and soon got into the safe. It was full of presents; kites and dolls and Lego sets and luggage tags. Another two notes informed them of two treasure hunts around the hotel. Two big boxes of Lego had also been put in the room to facilitate a daily competition to make a Lego creature. Matthew went to work and made a dog. Cameron went on a bug treasure hunt around the hotel. He won it and was handed a brand new box of Lego to keep. Stuart and I had a beer and relaxed for the first time in days.

The Lego theme park was a treat for everyone. Our hotel led straight into the heart of it, and we swapped bikes for water chutes, rollercoasters and pirate boats. By six o clock, everyone was happy and exhausted. Back on the bikes on our way towards Esbjerg, the ferry home and Stuart’s mum, the children chattered about their favourite rides, and all the inspiration they had picked up for getting creative with their Lego pieces back home. Matthew was particularly animated.

“When I get to school I can tell everyone I’ve been to Denmark, Finland, Latvia, Lithuania, Estonia, Germany, Alaand, Moominland and Legoland. That’s nine countries in all!” 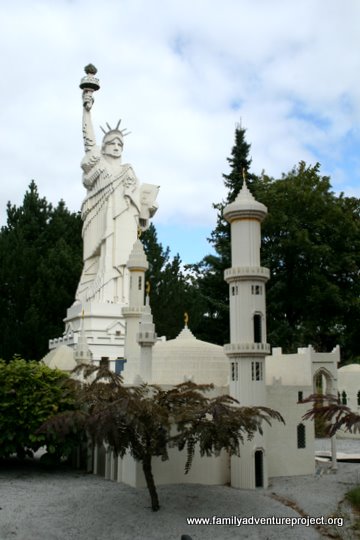 I’ve been to nine countries including Legoland

Do you have a view on this story? We’d love to hear your comments below.