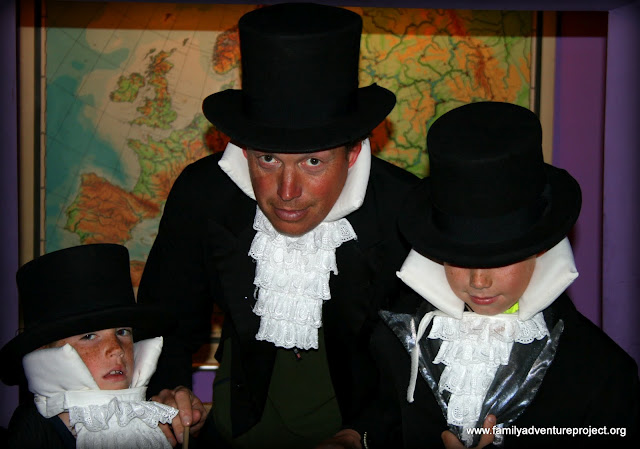 In Odense you can act out fairy tales of all kinds

Things that go bump in the night

The starchy collar, old top hat and overcoat helped me feel the part but it was the cane that really got me attention. Thwack! It made a great sound when it hit the desk. Yes! I liked the part of evil schoolmaster.

“Now get back to your desk boy,” I bellowed, “School’s not finished for you yet.”

But this is make believe, right?

The cane certainly made Cameron sit down and pay attention but we both knew it was just make believe. Not just because he did as he was told but because he was dressed as the back end of a pantomime horse.  Matthew disappeared when he saw the cane, dismissing himself to go looking for a beanstalk.  Through the schoolroom window I could see Kirstie on stage, dressed as a chicken, dancing away under a sky of pink fluffy clouds, with Hannah trailing behind dressed as a Princess, searching for a golden egg.

We probably had our fairy tales mixed up but it didn’t matter, for this was the Fyrtojet in Odense, a fairy tale centre where adults and kids can dress up, read, paint, play-act and explore fairy tale worlds and characters with fairy tale sets, costumes, lighting, music and props; participation and exploration are the name of the game and we were all well into it.

It’s fun to have kids as slaves

In the witches’ kitchen, Kirstie and I enjoyed fifteen minutes with the kids as slaves. What simple joy to have them at our beck and call; to have them wash dishes, scrub floors, peel vegetables, stew rats and live under the kitchen sink or be cursed to live forever as a toad or worse.

What fun to be the cobbler, to snip and sew and tack a pair of magical shoes for Cameron; shoes that stuck to his feet, tied themselves and would never wear out. 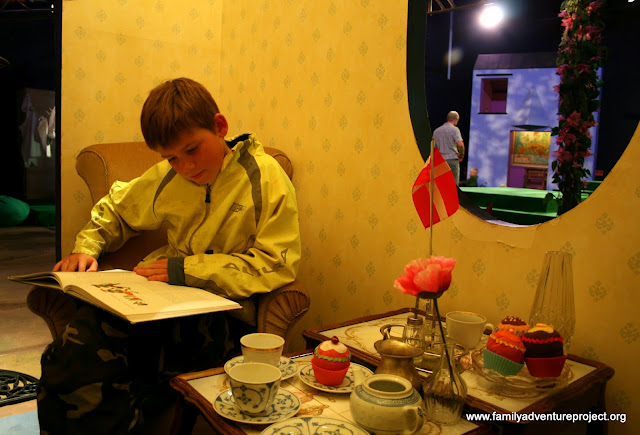 This really is a fairy tale world…

What pleasure to sit in Granny’s parlour, in her old rocking chair, to pour golden tea from a silver teapot and sip it from china cups, to eat knitted muffins and read Hannah ‘Father is Always Right’.

Odense is the birthplace of Hans Christian Anderson and gripped by the idea of a fairy tale theme day we’d made quite a detour to go there and learn more about him and his work. But beyond the town, things were not quite so rosy.  I’d been having trouble getting hold of mum on the phone and after three days without reply was getting worried something was wrong.   Between museums I sent a text to my brother in the UK asking him if he’d go around and check on her.  At the end of the day, as we left, I received a text back, composed as a rhyme, assuring me he’d go take a look.

We rode to a campsite 10km west of Odense, keen to get back on track towards Esbjerg. It was dusky when we arrived, the sun already setting ahead of us. Reception was in what seemed like a small garden centre shop that specialised in gnomes. The shelves were filled with dozens of them in every size, colour and pose including a large Father Christmas collection.  A blond haired woman appeared from a door behind the counter, wearing a stripey woollen hat with a small peak.

“Hello,” she said, greeting the children with a beautiful smile, “you look like you need a place to stay.”

The noticeboard behind her was decorated with children’s drawings and paintings of cabins, a lake, ducks and gnomes and letters saying ‘Thanks’ for ‘the best campsite in the world’, ‘a magical summer’, ‘this little bit of paradise.’

A cabin in paradise?

With rain forecast overnight Kirstie decided we should take a cabin. The lady agreed it was a good idea, pulled out a pretty hand drawn map of the site and circled a little house marked with the number 7. With the children entranced she sketched three little smiling faces next to the number 7 then, one by one, asked their names and wrote them down next to the faces. 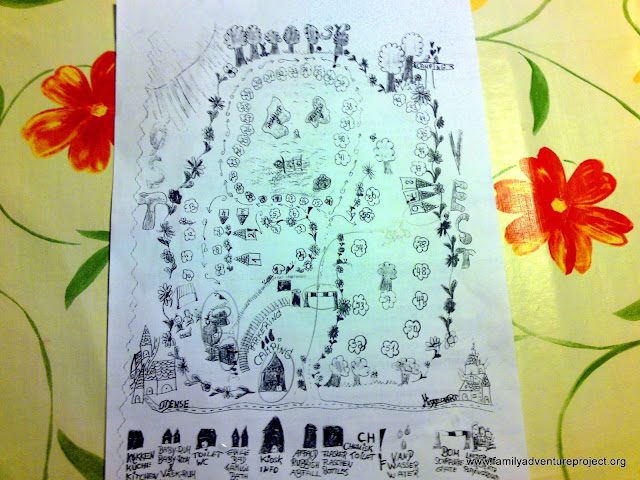 The magical map to a magical cabin

“This is a special cabin you know,” she explained taking them into her confidence and adding a few swirls and flowers to the drawing,” for at half past one the gnomes come and do some magic.” She handed over a purple key.

“But of course you will be asleep then won’t you?”

They all nodded their heads.

“You must sleep on the top of the kids bunk beds. Then if you aren’t asleep at half past one you must taste the roof like this.” She swiped her finger through the air and into her mouth.  “For they sometimes turn the roof into sugar candy.”

The kids looked at each other.

“This is me,” she said, finishing the map with another little face, drawn next to the shop, “..my name is Angelica,” she added a peaked hat to the face, “and if you need anything you find me and let me know.”

And so to the sugar roofed cabin

Hannah took the  map, led us through an arch in a hedge, down towards the lake and over to a little wooden version of the gingerbread house, complete with red checked curtains, flower baskets and inside, the kids bunk beds, two up, town down.

“We want the top bunks” announced the boys, keen to be within reach of the roof. 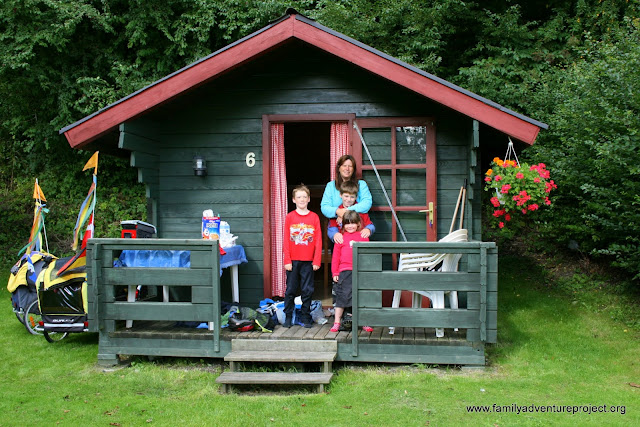 The bump in the night

I was woken later by my phone beeping to announce an incoming text. The phone clock said 1.24am. The text said my brother was at mum’s house and going to investigate a flickering light.  I’d just put my head back on the pillow when the most almighty thump startled me. Kirstie sat bolt upright and Cameron began to cry on the floor beside me. In the dark it was hard to make out what had happened but it didn’t sound like sugar candy. It was a boy falling out of bed.

As Kirstie and I tended to Cam, searching his head for signs of damage, another rhyming text arrived; there was a body on another floor, and medics bashing down a door. What nightmare was this? And what could I do from Denmark but worry?

“I’ve got a headache,” said Cameron groggily giving me something else to focus on as we sat on the floor in the dark underneath the kids bunk beds. I checked his speech, vision and movement again but they seemed OK so gave him Calpol from a spoon, then sat quietly in the gloom.  I worried about mum, Cameron drifted back off to sleep and Kirstie worried about Cameron, comforting herself with the fact he was not being sick.

A night of riddles

2am and another riddle on the phone; ‘Mum’s awake and confused, unbroken but bruised’. What relief! For a moment.  Cameron stirred and sat up, “I feel sick now.”

This night was far from over. Kirstie fetched a pan from the stove and Cameron filled it until he felt better and she felt worse.

“Look up vomiting and head injuries on the internet,” she said. “And see if you can find out where the nearest hospital is.”

While searching away on my internet phone, more incoming rhymes brought the latest from home; mum was being taken to hospital for care and observation.

“My headaches gone now,” said Cameron as I tucked him in tightly into the lower bunk bed having reassured Kirstie and myself that a little vomit after hitting your head was not unusual or cause for concern.

I climbed up into the top bunk and lay in the dark, Kirstie and Cameron still awake below. The clock said 3 o’ clock.  I swiped my fingers through the air, across the roof and into my mouth. It wasn’t sugar candy.