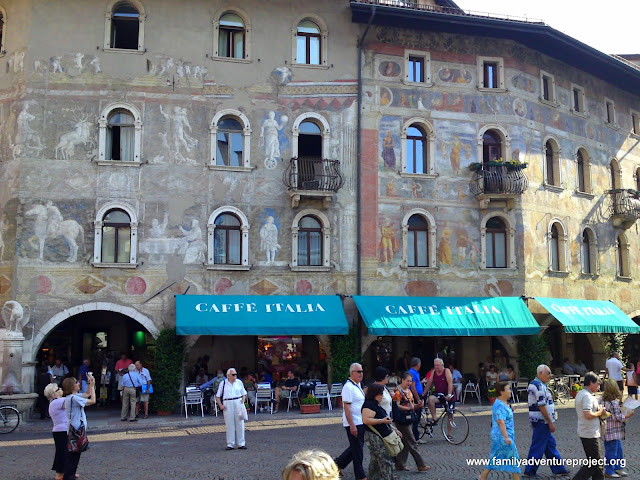 A man drove up to Trento’s main Piazza in his tiny car. Not a Smart car, but a tiny shiny red vehicle, just room for one. He nodded at a creamy skinned Italian girl in a café and she nodded back. After a moment she reappeared in the Piazza, carefully carrying a cup and saucer as slender as her body. He took it from her, and drank the tiny espresso in second without leaving his tiny car. They exchanged a few cents and he drove off. It was a brief moment in a colourfully faded city, but Matthew loved it. It reminded him of an episode of Top Gear where Jeremy Clarkson drove around his office in the smallest car in the world.

“I think this one was smaller, shall I write to Top Gear?”

We strolled back to our hotel in the morning sunshine, wondering how you buy such a car. 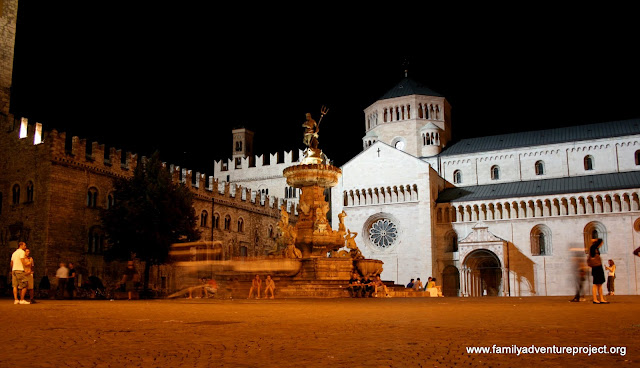 The Cathedral in Trento at night

A moment of cool through the fairy door

In the main Piazza, opposite our hotel, stood another creamy coloured apparition. It was early so the main doors of the cathedral were still closed. But in the corner we found a narrow door which Hannah might have called a fairy entrance. It was open; its cool darkness inviting us away from temperatures already in the mid 30’s. We crept in, straight onto the altar where five priests were saying mass, to a congregation of four. Perhaps they thought Matthew was a choirboy. Anyway, they said nothing, barely registering our presence. Perhaps people stumble in through that tiny door all the time. We did a U turn, back out into the blistering heat.

Everything so small and perfectly formed

Stuart and the kids were having breakfast when we reached the hotel. “Look Mum, teeny rolls,” said Hannah, trying to break open a small but perfectly formed piece of bread. And there were teeny croissants to go with them, along with a teeny weeny espresso for me, which I drank in one sip. We ate the rolls, and then examined the basket of cellophane wrapped goodies that also appeared. Titchy but perfectly formed pieces of toast, like miniature copies; little chocolate filled croissants and individual wafers. All the excesses and big coffees of Germany were now well behind us. We now had both feet firmly in Italy, where everything seems small but perfectly formed. 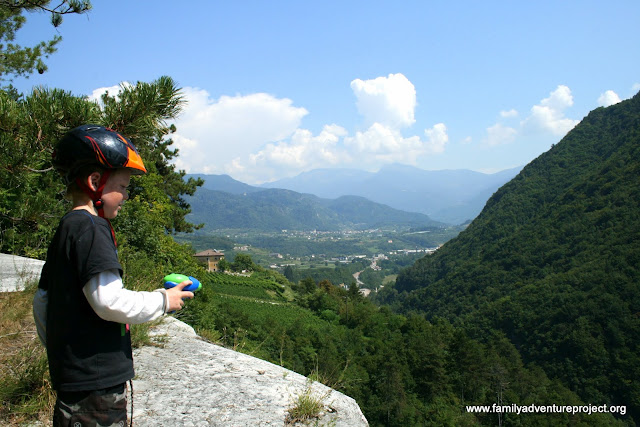 Unexpected climbing in the Italian heat.. beautiful but exhausting

We looked at our map, and realised that our days of downhill riding were about to end. We had a mountain to go over to switch valleys and continue our journey along the Via Claudia. And time was ticking by. It was eleven before we got our act together and left the hotel.

We bought some baguettes; little thin ones that the baker cut to fit into a small paper bag, and checked with tourist information that our only option was to leave the city via a steep cycle path. And so we set out in the midday heat, pedalling straight uphill. We managed a hundred metres of vertical climb, often getting off to push the bikes. Italian hills were anything but tiny. We collapsed outside a café in the village of Cognola. The woman was mopping the floor, but said she’d let us have ice creams before she closed for the afternoon.

Everyone on siesta except us 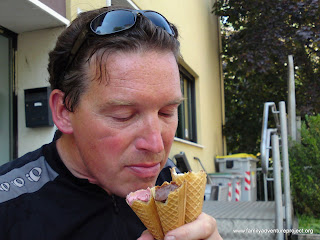 The shop next door let us buy some pizza slices before they too closed until four o’ clock. We sat outside two closed café’s as the shop owners wound in their shutters and awnings, leaving us burning in heat that was registering 44 degrees.

“I don’t believe it. The Italians have a siesta. Everything closes in the afternoon,” said Stuart despondently. “They have their tiny rolls and tiny coffee and then do a tiny bit of work before shutting up shop for most of the day. Leaving us stuck on one of their bloody great big hills all day. Powered by the smallest bread roll known to man.”

Shooting himself with a water pistol

We pushed on, stopping outside a bus shelter when Cameron started showing signs of heat exhaustion. It was only ten kilometres to a lake warmed by natural thermals, but at this rate it would take the rest of the day. He swapped with Hannah and continued in the buggy, shooting himself with a water pistol to put an end to his misery.

Lago Di Caldonazza was huge. And warm, and choppy. We were all in it like a shot. This was no tiny swim. We stayed forever. 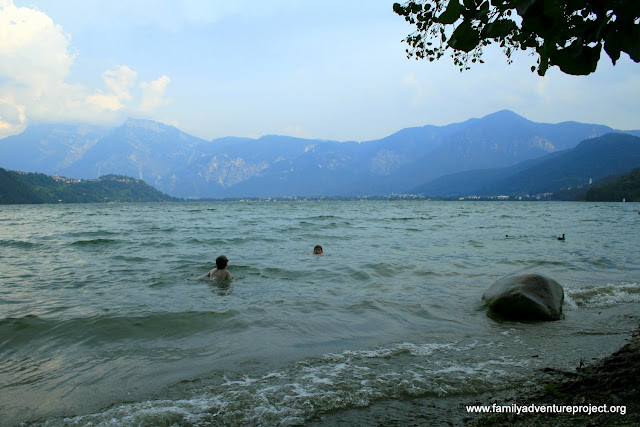