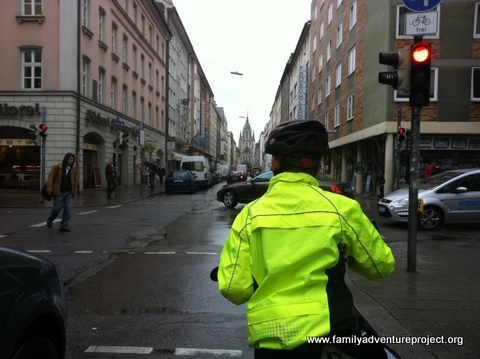 It was a wet start to our ride, starting in Munich

Munich is sulking. We can barely see the third largest city in Germany through the drizzle as we make our way down the puddled streets, trying to avoid parked or moving cars. Even the exclusive shops and restaurants on Maximillianstrasse look unappealing in the grey weather; Tiffany’s tries and fails to sparkle. Louis Vuitton is weighed down by its own baggage. We pedal into the Marienplatz where the impressive Rathaus is all but closed. The tourists have stayed away and chairs are piled onto tables in the courtyard Ratskeller. We abandon our cycle tour of the city.

Twenty four hours later and we set out for a re-run tour of a place that’s regularly listed amongst the top ten of cities in the world for quality of life. I spin a pedal and move away from the hotel fence where my bike has been chained up overnight. My chain clunks, and sticks in the teeth of the dérailleur. I push down on the pedal and my chain grinds. I change gear and the chain twists by 90 degrees.

The chain is mangled

Stuart is shouting. “We haven’t even left Munich yet, What did you do?”

I protest my innocence but it doesn’t wash, not when the chain lies mangled in the sprocket as clear evidence of my incompetence. It thunks around, slipping off its cog at every revolution.

“You must have done something,” he yells.

Beside us, students entering the Munich Psychiatric College are sussing us out as a potential study. I limp along the street, behind Stuart and Matthew.

We Google Lovebike cycle shop on the city’s ring road and David who runs it echoes Stuart’s exclamations.

“What did you do?” But he’s a little more cheerful about my mistakes. “No problem, it just needs a new chain and rear sprocket. Come back in an hour and I’ll have it ready.”

There’s no language barrier here as David is from Cardiff. We leave the other bikes chained up outside his shop and wander along the leafy streets. 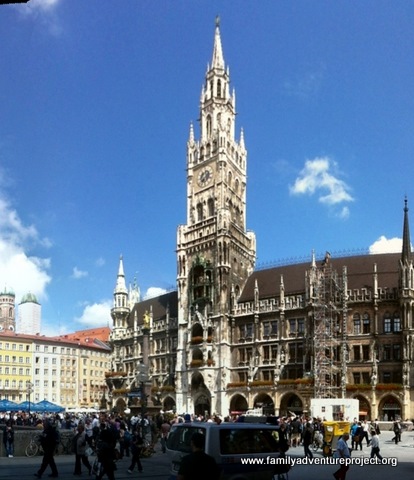 As we wander the sun begins to smile

Munich starts to smile. In the city centre the Rathaus is much more welcoming today; its clock tower stretching into soft cloud. An expensive lunch is being served in the now atmospheric courtyard and the smells travel on the breeze. It is nearly midday and the Marienplatz is packed with people waiting for something. In the middle ages this huge square hosted markets and tournaments. Today it hosts tourists. They all gaze up to the clock tower where a tableaux of figures below it watches down upon them.

St Peter’s Church just behind us goes off first, chiming the hour. Then the Rathaus takes up the tune on an almighty glockenspiel, the melody ringing out across the square. The peals clash and dip as the two buildings compete for attention. Then, just when we think it might be over, the historic figures in the town hall tower come to life. Around they go on a uniquely Munich merry-go- round; little men on horseback jousting, marching and dancing. Suddenly one slumps on his horse and several hundred tourists chuckle. ‘Munich loves you’ is this city’s motto. On this warm and fresh day, the tourists feel the love. 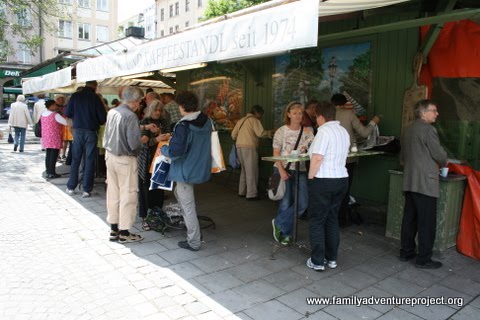 From Marienplatz to the Viktualenmarkt

Watching him fall on his sword from a golden moon plinth on the other side of the square is the Virgin Mary, the namesake of the square who glints in the sun. We catch some of her reflected light as we make our way back to the bicycle shop through the Viktualenmarkt, once a simple farmers’ market but now a haven for gourmet foodies. 140 stalls; all juicing and slicing, and many more customers nibbling and supping. We buy a baguette and some slices of cheese and head of for a picnic, which would have been a soggy disaster only a day ago.

On the way, we pick up my bicycle, complete with shiny new chain and sprocket. Munich loves us, but it’s time to part.