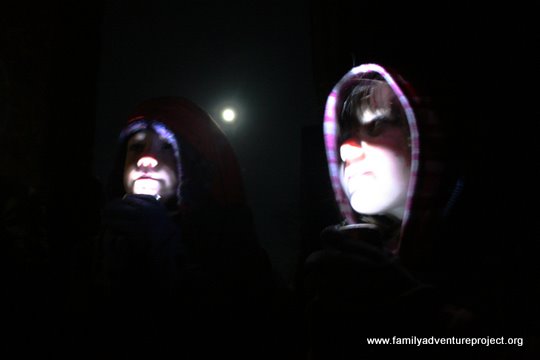 Fuzzy faces in the moonlight

Three faces glow, lit up with torches in the pitch black. A big round one, a smaller blonde one, and a tiny bespectacled one. Like rural versions of the ghosts of Christmas, past, present and future.

“Only if it’s going to Burton Services.”

This isn’t a Christmas story. This is an Adventure story. But it’s not a life changing story. It’s not even a very exciting story. It’s the story of a Friday night hike to a motorway motel less than a mile away from our house. It’s a walk we’ve done a thousand times, to a place we’ve been to a thousand times. It’s where we go when we run out of petrol, or milk or chocolate. But we’ve never worn a head torch to go there. This is what makes it an adventure. Even the moon gets excited about going to a Travelodge if everyone is wearing a head torch. 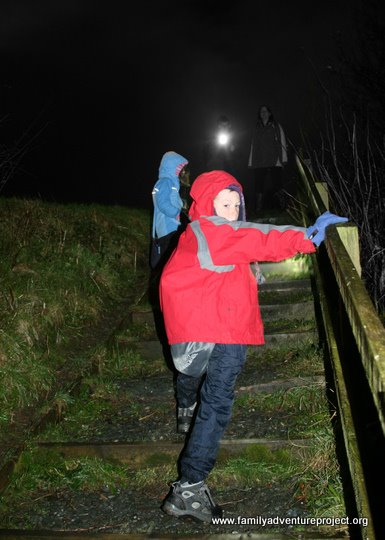 The Stairway to Heaven? Has anyone ever called a Travelodge that?

Are we there yet?

“Mum… how long have we been walking?”

“A service station with beds.”

“Do people normally walk to one?

“Why are we walking to one?”

Why are we doing this?

We are walking to a Travelodge because it is there. Actually we are mostly walking to it because we got a room in it for twelve quid by booking three months in advance. And we thought it might be fun to go in the dark. We know from our cycling that everything sounds, smells and looks slightly different; more vital somehow in the dark. The wind feels colder on our cheeks, the fields seem emptier, the the black seems blacker. Our backpacks are full of expectation and our boots are full of tread. Well theirs are. While the kids and Stuart are all properly booted up, for some reason I am in my normal shoes. And we are walking along the canal. And it’s been raining for days and the ground is swampy. My soles slip and slide and I am losing my grip.

“This is really annoying. No one told me it would be muddy.”

“Why are you wearing those silly shoes, Princess Fiona?”

“They are. The kids have all got waterproof boots. I haven’t. I never spend anything on myself any more.”

“Apart from coffee’s. You buy lots of coffees.”

“Can I have roller skates for Christmas.?”

“Because you’ll leave them on the stairs and I’ll go flying. With a coffee.”

We turn off our torches and absorb our surroundings. I point out the only constellation I know, The Plough.  We walk on. But what’s that noise? We pause in the moonlight. All around us there’s the sound of people shushing each other in a library.

“It’s the sheep, squelching in the muddy grass.” Sure enough, the sheep are slipping and sliding too. 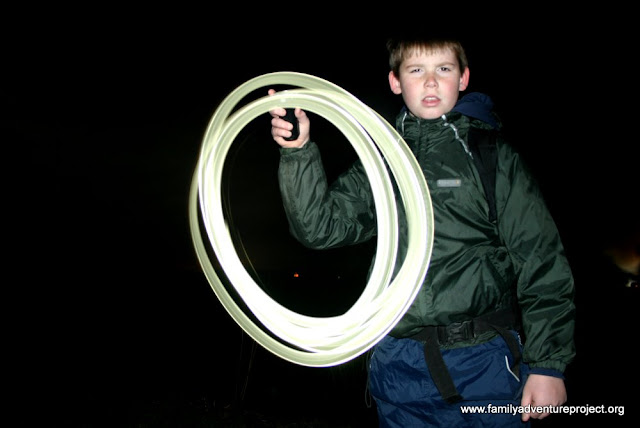 What’s that shape? Over there in the field?

What’s that? I can’t see

We walk on. But what’s that shape? We turn on our headtorches and shine them into the canal. I am startled as the amber glow picks out visions of whiteness swimming slowly towards us out of the darkness.

“It’s swans. They’re going for an adventure too. They’re very peaceful aren’t they?”

We walk on. But what’s that smell? An earthy, burny smell that reminds me of firework night.

“Why are they burning stuff?

“Maybe they are trying to keep warm.”

The light at the end of the darkness

We walk on. But what’s that light? It’s the service station, shining like a beacon next to the M6. Above it is the almost full moon. It has led us here after all. Like the kings in the nativity following the star.

There is a room in the inn. But only for four. We have to sneak Hannah through the doors when no one is watching. We bring gifts, but not gold, frankinsense or myrrh. We bring bacon butties, beers for the adults and the Dangerous Book for Boys board game for the whole family. We kick off our boots and fall out with each other over the building of a cardboard raft. We are given six counters and told to make the shape of the ‘Ursula Minor.’  But I only know The Plough. Then there’s a tornado and everyone has to give back their raft to the banker. We all lose.

We turn the lights out and the headtorches off. The adventure is almost at an end.

“Of course they do.”

“I think they dream of cheese.”