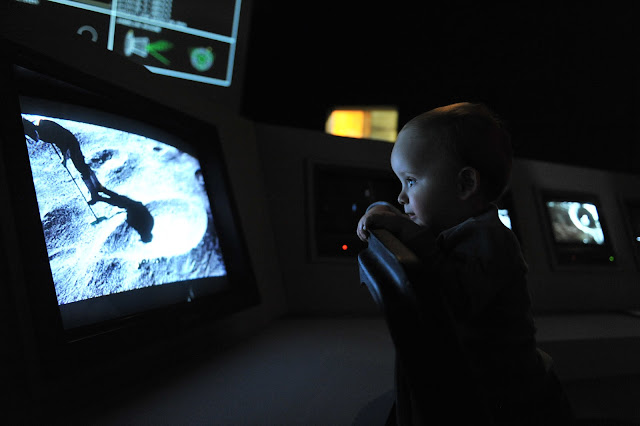 The Moon Goose Analogue: Lunar Migration Facility, 2011
Commissioned by The Arts Catalyst and FACT for Republic of the Moon, 2011.
Installation view at FACT. Photographer: Brian Slater.

The moon, dreams and making them happen

The moon is the muse for a group of six artists exhibiting at FACT Liverpool in a fanciful exhibition, Republic of The Moon. For me, a child of the sixties, the moon is deeply associated with the moon landings and with audacious dreams that can come true. A recent visit to Republic of The Moon got me thinking about what the moon and these artists have to say to us about dreams and making them come true.

I smelt the moon today 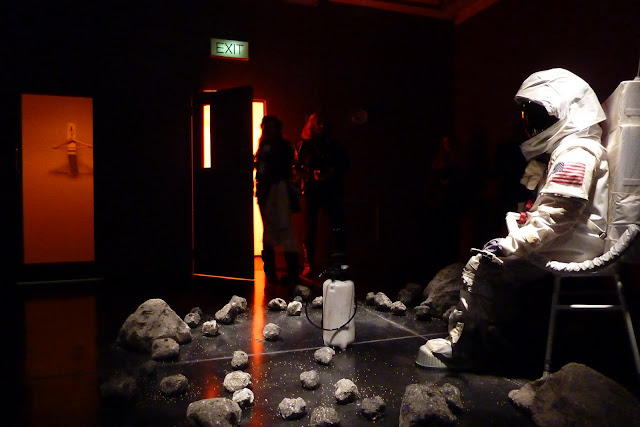 Enter at Own Risk, 2011, WE COLONISED THE MOON
Commissioned by The Arts Catalyst and FACT for Republic of the Moon, 2011.
Installation view at FACT. Photographer: Phil Olsen.

We Colonised the Moon have replicated the smell of the moon in an installation in which
an actor in astronaut costume sprays a “garden” of moon rocks with “moon scent”.

I smelt the moon today. And it didn’t smell of cheese. It was a subtle smell, not damp or dusty or particularly pungent. In fact it hardly smelt of anything. But it stuck to my jumper and even now, when I sniff my sleeve, it flies me to the moon.

The moon is a place of dreams, a place to fly to, to reach for; far away but not beyond reach. We’ve been there. We dreamed of it and made it happen. We held an audacious vision, focused on it, invested in it, researched it, applied ourselves and made it happen. That’s how dreams come true. We have been to the moon. And we can go again. If we want to. If we choose to.

The man in the moon wasn’t at home last time I visited. He only works weekends. I saw his spacesuit though, hanging in the cupboard, just beyond his moon-rock garden and empty spray can. His garden looked bare without him. Neat and cared for, but bare. Not even any garden furniture. Not really my kind of garden. But his vision of loveliness. A kind of moon garden. Made with all he had available to him. And tended whenever he could. What more can he do? Perhaps I should have been more appreciative. He gave his garden his all in difficult circumstances. It can’t be easy living on the moon.

How do you make a moon come true? 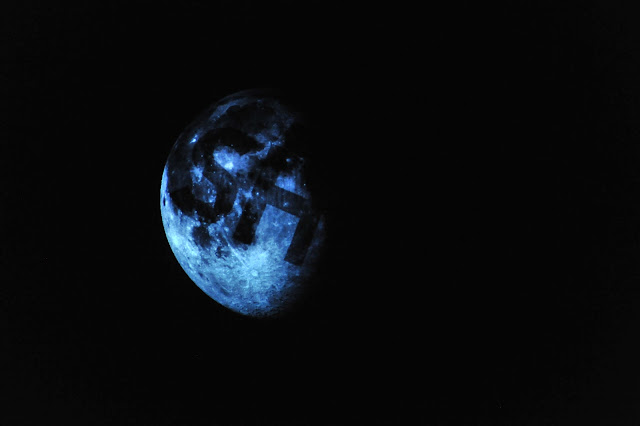 moonmeme, 1992-2011, Liliane Lijn.
Presented by The Arts Catalyst and FACT in Republic of the Moon, 2011.
Installation view at FACT. Photographer: Brian Slater.

Liliane Lijn wants to project the word ‘she’ onto the surface of the moon
so it can be seen from earth, at least on a full moon.

It’s a shame the man in the moon wasn’t there. I wanted to talk with him, to ask if there’s a woman in the moon too. Some in the Republic are working to reclaim the moon. For women.

Liliane Lijn wants to project the word “SHE” onto the surface of the moon, so we can see it from earth and pay homage to the moon, its’ feminine qualities and transformative potential. It will remind us the moon is not just for men, nor is it a man. The work’s been in progress for almost 20 years and the vision is clear. I like it. It’s ambitious, challenging and full of questions about how to achieve it. Questions people are grappling with. Committed people, creative people, applying their minds, talents, energy and spirit to a task they are committed to. In a darkened room, in a corner of the Republic, Liliane shares her vision of the SHE moon, inspiring others to make it come true. In that blackened space I was a ‘new’ moon and heard it cry ‘SHE’ but although it may have touched me, I can’t touch it. Not yet. But someday. Envisioning and sharing can help make a moon come true.

Every dream has its price 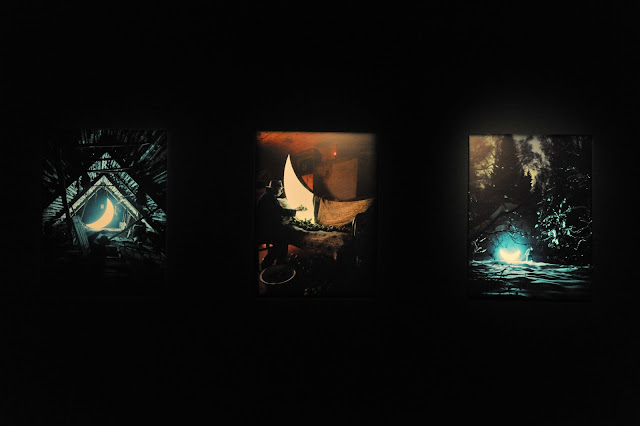 Private Moon, 2011, Leonid Tishkov.
Presented by The Arts Catalyst and FACT in Republic of the Moon, 2011.
Installation view at FACT. Photographer: Brian Slater.

Russian artist Leonid Tishkov’s photographs tell the story
of a man who met the moon and stayed with her for the rest of his life.

I’d love to have a moon of my own. To have and to hold. From this day forward. In sickness and in health. Some have tried to court the moon, to catch it, hide it, live with it. I’ve seen the photos.

Leonid Tishkov has been travelling with his personal Private Moon for years. It doesn’t look easy to travel with a moon. I can’t begin to imagine the difficulties involved in transporting it or finding suitable places to stay or how you would care for an illuminated moon. Nor what people must say about such an endeavour. You must need to be incredibly patient, resourceful and dedicated. And have something of a thick skin, not to be put off by people’s carping on about your moon invading their space or jealous comments about your beautiful moon pal.

Of course it’s unrealistic to expect everyone to like our dreams or cheer us on but it would be nice, wouldn’t it? I guess every dream has its price; financial, physical, psychological. Still, the pictures make it look so magical, I’m sure it must be worth it. 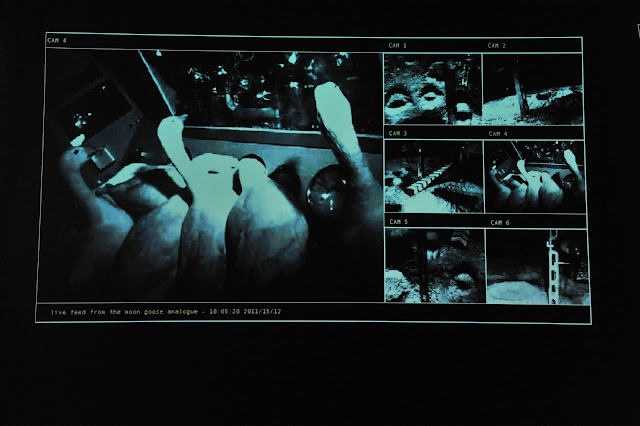 Inspired by a 400 year old story of The Man in The Moone,
Agnes Meyer-Brandis is breeding moon-geese and training them to pull a chariot to the moon.

Dreams are deeply personal. Perhaps that’s why we can be reluctant to share them. They expose something of our inner world and aspirations, making us vulnerable, open to judgment, at risk of ridicule. Some dreams just seem crazy, inspired by nonsense. Like trying to train a colony of geese to fly a chariot into space. But what is crazy? How do we know what is impossible until we’ve tried? Are we too quick to dismiss the incredible as fantasy? I think German artist Agnes Meyer-Brandis thinks so. And she’s got me wondering.

Somewhere in the Republic of The Moon, Meyer-Brandis has been raising eleven moon-geese in an incredible artistic experiment inspired by a 400-year-old story. When Francis Godwin wrote The Man in the Moone he thought a voyage to the Moon was no more fantastic then a voyage to America once was in his time. And of course 400 years later he was proved right. And if he was right about that who’s to say the methods he proposed might not be possible too, one day?

Which is why Meyer-Bran has imprinted herself as goose mother to a flock of moon-geese, is familiarising them with the lunar environment and training them to fly towards the moon. This is no half-hearted endeavour, but one of rigour and attention to detail. Meyer-Brandis has named each of the moon-geese after an astronaut, established a simulated lunar landscape for them to explore in Pollinara, Italy and built a control centre at the Republic of The Moon. She has documented and videoed the whole business and doesn’t seem put off by early lack of success in either harnessing her moon-geese to a chariot or attempting take-off. She remains determined, persistent, resilient, even in the face of what others might call failure.

Looking at the hatched moon-geese eggs, watching her videos and viewing Neil, Svetlana, Gonzales, Valentina, Friede, Juri, Buzz, Kaguya-Anousheh, Irena, Rakesh, and Konstantin-Hermann as they explore their moon in Pollinara, a part of me is tempted to laugh. But I’m impressed too and inspired by this fantastical mission impossible. Of course some of our dreams may seem crazy to others, even to ourselves, but does that mean they shouldn’t be pursued with the same rigour, dedication and commitment?

Fly me to the moon 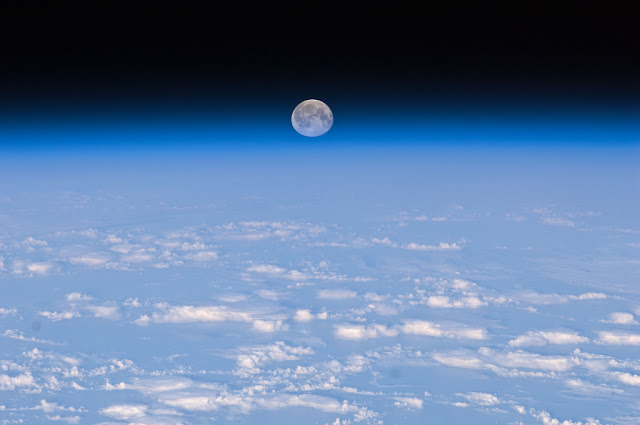 Despite the fact we’ve been to the moon and back again, it’s still is a place of dreams; a real and imaginative place to reach for and fly to. Like all the best dreams it’s a place far away but not beyond reach, familiar yet unknown. A place that maybe we can get to, if we’re bold enough to hold onto our audacious vision (no matter how crazy), believe in it, engage others, focus on it, research it, invest in it, apply ourselves, avoid naysayers and remain resilient in the face of set-backs. That’s how a moon comes true.

I smelt the moon today. And it didn’t smell of cheese.

Republic of the Moon was co-curated by The Arts Catalyst and FACT, Liverpool and was on show in Liverpool in February 2012

Did you see the Republic of The Moon? Are you reaching for the moon in your dreams? . 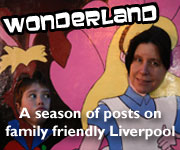