The juxtaposition of nature and industry abounds in the North East

Beyond the edge of the Pennines, the C2C drops down into a different world, a world dominated by its’ industrial heritage, as we found out as we rode on towards the C2C finish at the North Sea in Sunderland. After days riding over moorland we find ourselves at Beamish, the museum of outdoor life.

Shades of green mixed with steely reminders of the past

It’s like turning the page of a book and finding we’ve switched from fiction to fact. One moment the landscape is a poet’s dream; all green curved spaces and classic Cumbrian places. The next we’re immersed in the grit of urban life and steely reminders of the past. That’s not to say I don’t like it. There’s something real and very immediate about the North East; it kind of grabs you by the collar and won’t let you go.

The past is everywhere here. At Allenheads the kids throw pebbles down an old mine shaft, and listen for how long it takes for them to hit the water. It’s a kind of dark version of pooh sticks.

How deep is this mine shaft?

Reminders of industrial heritage are everywhere

To avoid a steep double dip of the road, we go off road and push up onto the moor and into the mist. Soon we are on a track studded with the remains of the miners’ railway that once helped cart minerals far away from this wind funnel high in the Western Pennines. There is no such help for a family of cyclists, we have to cart ourselves up through the squelchy mud and cinder. This landscape is a mixture of wild beauty and slashes and scars, jarring reminders of County Durham’s industrial past.

“It’s downhill all the way from Consett,” said a family we met at Little Salkeld who had cycled the route before. Their words are definitely on the side of fiction. At Consett we find ourselves climbing Blackhill; a steep and somewhat pointless road that casts a long shadow over the day, until we can point the bicycles downhill once more. For the last part of the C2C trail, there are reminders of industries of the North East everywhere we look.

Transformers on the C2C

The faces made out of transformers, the cows made from bits of steel, the giant nuts and bolts that the children climb on and sit in; all linking our fragile economic present back to the area’s thriving industrial past. In Rookhope the flower boxes are brightly painted former mining trucks. But Rookhope isn’t in bloom this February.

But while this area may have been at the forefront of Britain’s heavy industry, it wasn’t much fun being a miner. We find out all about the life of a pit worker at Beamish, the excellent ‘living museum of the north.’ For half term the staff recreate the 1891 Silksworth Colliery strikes that resulted in mining families being evicted from their homes. 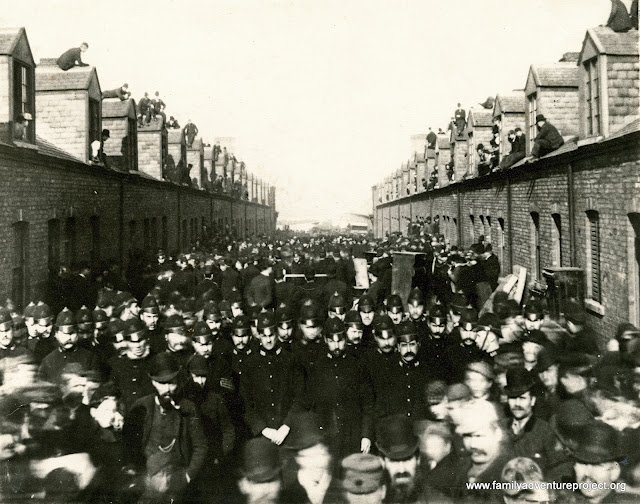 The tension builds as the morning wears on, and the costumed Silksworth folk start to gather at the pit village banging pots and pans to protest at the injustice of the evictions. Notices are everywhere informing locals (and of course tourists) of the impending evictions and there’s a real sense of battle lines being drawn as women and children whip the crowd up, encouraging them to shout ‘shame on you,’ at the men who are coming to take away their homes.

From the hillside the figures of the ‘candy-men’ emerge, drawing a horse and cart and accompanied by a policeman. They are evicting the striking tenants from the pit cottages on behalf of the landlord; colliery owner Lord Londonderry. Many of the supporters are wearing supportive rosettes they have just made in craft workshops. Our own kids get into the shouting, climbing on the walls to see women being hoisted out and onto the cart still sitting in their chairs. It’s exciting and adrenaline filled, and a little overwhelming for Hannah, who grasps my hand in hers.

When the drama is over, the horse and carriage makes its way through Beamish, filled with simple furniture from the cottages. But our kids aren’t ready to give the fight. They poke each other, shouting “out, out, out.” They queue for their free poor man’s soup with attitude, like real mining children. But the food isn’t to their 21th century tastes.

“This is revolting,” says Cameron, screwing up his face.

“Shame on you,” shouts Matthew. It isn’t clear whether he is referring to the soup kitchen or his brother.

I taste the watery soup and search for a vegetable in it. It may not taste nice but it’s a sharp taste of the past, like all of this place.

What lies beneath the grime?

It’s not like we haven’t been to the North East before. We’ve had nights out in Newcastle watching lassies venture out in almost nothing but heels. We’ve cycled up the coast to Whitley Bay and visited Durham Castle too. In fact we’ve caught the ferry to Holland from North Shields so many times, the terminal practically feels like home. But it’s only this trip we’ve noticed how much the past lives on in the present here, not just in the people and their spirit, but in strange juxtapositions of slick city centres and stunning countryside with old mine workings, pit towns and others beasts of industry.

Down in the town, life is different. At least on the outside.

This split is evident at Beamish too where a tram ride takes you a world away from the grimy reality of the colliery and pit village to a pretty little town with its neat line of townhouses, pub, shops and bank. In the town, we visit the dentist who shares some northern wisdom with us. “Mining is dirty work but we’re all the same really,” he explains. “Me, the solicitor, bank manager, piano teacher, the miners. We all work hard to earn a wage. We all provide homes and food for our families. We all have respectable trades and play our part. The difference is only on the outside. Here in the town we have to look good, while they have no choice but to walk round covered in coal dust.”

As we bike on through towns and villages towards the city and the sea, through countryside and industrial scourge we look behind the grime to see what lies beneath.

Have you visited the North East? What hidden beauties did you find?

We did this C2C ride across England, from Workington to Sunderland, as part of our Family Adventure Capital Season. We’re exploring different ways families can adventure together in and around Cumbria, sharing ideas and inspiration to encourage families to get out, get active and adventure together.

Got some ideas for things we should try? Let us know.

Disclosure note: Thanks to Beamish Museum who helped us to bring you this story.