Is your marriage worth a flitch of bacon?

Can you honestly say in the last year you haven’t wished you married somebody else? Is your marriage worth a flitch of bacon? Something Stuart gave me today has got me wondering.

It’s not like ours was a shotgun wedding. It took Stuart and I thirteen years to get married. And our engagement, when it finally happened, was a protracted string of negotiations rather than a romantic proposal. He said he would do it, but only if I agreed to quit my job and cycle South America on a nine month honeymoon. I did.

I said I would do it, but only if we could have five kids. We didn’t. Not yet. And not likely.

He said he would do it, but only if we made a lifestyle change. We did.

And I said I would do it, but only if I didn’t ever have to iron one of his shirts. And to this day we don’t have an iron. 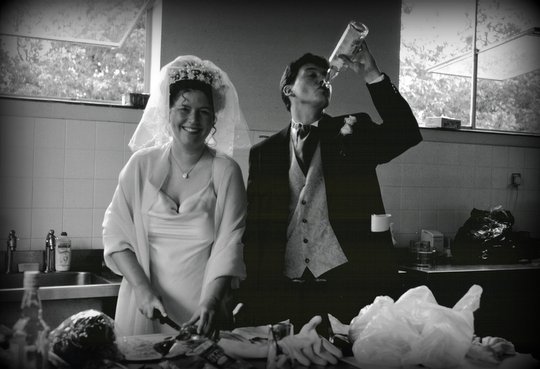 On our wedding day we established our own recipe for happiness.

I think our marriage has worked well…

On the whole I think this marriage thing has worked well.  Maybe because we work to make our family life as adventurous as we can. Maybe because we stepped away from the treadmill of city life to make time for family life. Maybe because we share similar values. Or maybe it’s just because we’re too old to squabble. To be honest it’s not something I’ve analysed much, until this morning when Stuart forwards me an e-mail offering half a pig in return for a true and public declaration of our devotion.

He knew I’d fall for it because he knows how much I love bacon. Especially the crispy, streaky variety. If we’re not having a sausage sunrise, there’s nothing better than a bacon butty on a Saturday morning. But half a pig? That’s a lot of butties. At first I thought he was offering me half a pig, not exactly romantic but thoughtful. But it’s not a gift, it’s not even a given. It’s a prize in a competition. I feel a bit duped. But then reading on the competition sounds dead easy to win. All we have to do is convince a court in Essex that we’re Mr and Mrs Happily Married.

I should perhaps make it clear that this isn’t your typical British court, filled with naughty boys on speeding charges and tabloid phone hackers. This is a special court only convened every four years in Great Dunmow in Essex. Couples from anywhere in the world who believe they are happily married can apply for the chance to be awarded a flitch of bacon, which I learn is half a pig. To qualify they have to swear under oath that for a year and a day they haven’t had a quarrel or regretted getting hitched. If they can convince the court they’re not telling porkies, then they’re on for butties for at least a month and a day.  The more I read the more I’m convinced the bacon’s in the bag. 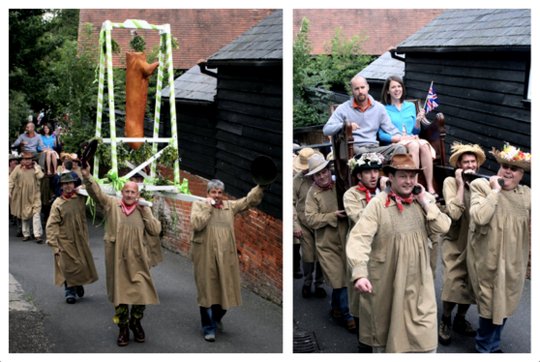 A flitch of bacon (left) is awarded to the happiest couple. Image: Dunmow Flitch

But the Dunmow Flitch trials would test it..

These ‘trials’ have been going on for a while. It apparently started in 1104 (some years before Tesco started doing Finest streaky) when the Lord of the Manor Reginald Fitzwalter and his wife had been married a year and a day. They dressed as peasants and went to ask the Prior for a blessing. He was so impressed by their love and devotion that he gave them a flitch of bacon. (Half a pig if you dozed off earlier). Fitzwalter then gave his land to the Priory on the condition that a flitch should be awarded to any couple who could prove they were similarly devoted in the future. 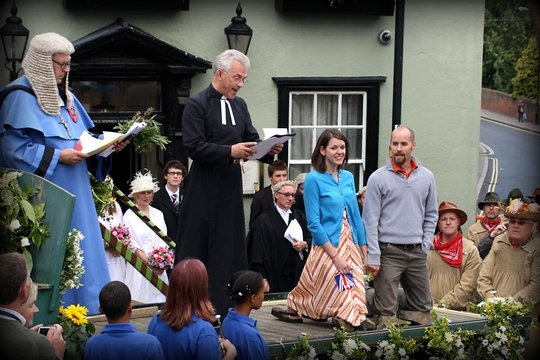 Couples must declare on oath how happy they are. Image: Dunmow Flitch

But would it stand up to judge and jury?

“This is ours for the taking,” I say to Stuart. But he points out the small print. I never read the small print. For the modern day trials there’s a court presided over by a judge, with counsel representing the claimants and opposing counsel representing the flitch donors. There is a jury of six maidens and six bachelors, a clerk of the court to record the proceedings and an usher to maintain order. During the last trials in 2008, only four couples qualified for the flitch, including a visiting couple from Nashville.

I tell Stuart we should enter anyway as I think our marriage is strong enough to be tested in a court of law. After all it’s been tested in many ways, in many countries with our many kids on our many adventures.

He laughs. “You’re always saying you regret marrying me.”

“You are. All the time. And you won’t convince a court of law you’ve never fancied David Beckham.”

Hmm. He has a point. There are tensions in our marriage that wouldn’t be too hard for an experienced interrogator of love to find out.

But even if we decide not to enter, you could. Anyone can, well if you’re hitched and think your relationship can stand public scrutiny. If you’re interested, the next  Dunmow Flitch Trials will be held in 2016 on 9th July but entries must usually be in by end of February. Or if you don’t think your relationship is up to it yet, don’t worry you can work on it in time for the 2020 trials since they are held every four years.

I tell Stuart I really do think we should do it.