The World Premiere of the North’s contribution to the London 2012 Festival, ‘On The Night Shift’, was billed as a fusion of fire, motion and rhythm. But if you hold an outdoor event in the English Lakes, you can expect water to play a part too. And while the rain didn’t put out the Olympic flame when it arrived in Bowness on Windermere, as darkness fell and the weather intensified you had to wonder if the show could or would go on… 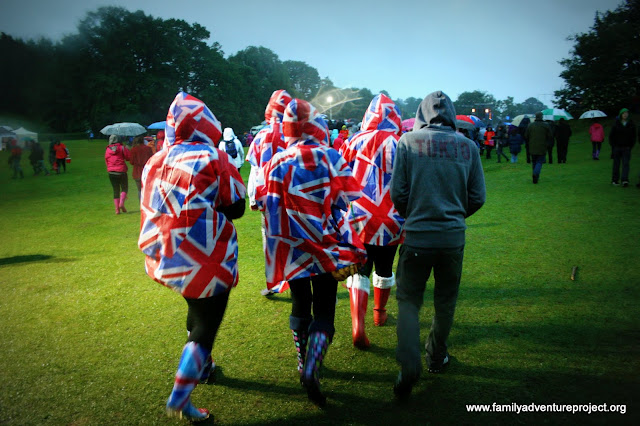 Arriving for performance of On The Night Shift, Bowness on Windermere

In the beginning there was rhythm

Four figures in rust coloured boiler suits hold a dancer aloft as the stage floods with light and the air pulses to an industrial beat. It’s unclear whether the dancer is standing on a drum or a trampoline (perhaps a combination of both) but as the rain bounces off it and catapults into the night sky, she keeps with the beat until the drums signal a change of mood.

A night where the flame becomes a firework

With giant sparks and constant nods to fire, heat and energy this show wouldn’t look out of place in the North East, where heavy industry was always part of the regional identity. But the world premiere of the Les Commandos Percu show is a unique marriage of Cumbria and France. It features British performers working with a Toulouse based troop that specialises in music and pyrotechnics. We may have been in competition with the French to host The Games, but it seems they didn’t hold a grudge.

Earlier on. As darkness descends so does the rain and the anticipation.

A night where the Lakes are Alive

This premiere performance of On The Night Shift is brought to the world by Lakes Alive, an organisation that has worked hard to put Cumbria on the culture map the last six years. The show takes place on a hill above Windermere, where the Olympic Flame has just arrived on a boat. But this show isn’t just a key part of the opening of the London 2012 Festival; it will appear again at the finale of the 2012 Preston Guild in September before embarking on a national and international tour in October. And it deserves to. It’s one of the most impressive outdoor shows I have ever seen; and I’m a veteran of Glastonbury.

The percussive energy is enough to make you forget the rain.

On the publicity “On The Night Shift” is described as “a night to remember,” yet that doesn’t begin to capture the experience of standing in pelting rain while a stage is electrified by light, the atmosphere is choked with rocket smoke and the drumbeat echoes off the trees.

This is a ‘spectacular’ on so many levels. And as well as being ‘Commando’s of Percussion,’ I can confirm Les Commandos Percu are pretty good with a sparkler. Music becomes fireworks. Dancers become fireworks. And fireworks suddenly make sense, as another instrument in the percussionists armoury.

When the lights go out between numbers, the whole stage is so smoke filled you can’t be sure you’ll ever be able to see the performers again. But this is no interval safety curtain; as the beat drives on the smokescreen lifts on the breeze to reveal dancers spinning, tumbling and pirouetting with fireworks in their hands. Between the rain and the pyrotechnics it’s hard to understand why they aren’t drowned, electrocuted or burnt!

“Now they’ve got a fog making machine,” squeals Cameron, as a drummer beats puffs of red smoke into the audience like a cross between an Olympic tennis player and a heavy smoker.

“Where did they get that from? I want one!”

It wasn’t Argos that’s for sure. And I don’t think he’ll be getting one for  Christmas.

A night where human spirit stands up to the elements

As the drummers throw their sticks into the crowd signalling sign off, the umbrellas start to move and people begin their journey home across a mash up of mud. As Olympic gold record holder Jonathan Edwards remarked in his introduction to the performance, the signs around Bowness have lumped the Great North Swim and The Olympic Torch together in a way that suddenly seems appropriate.

“As the saying goes, there is no such such thing as bad weather, just different levels of good weather,” remarked Kendal Arts International Director Julie Tait at the start of the show. Well, while Les Commandos Percu delivered a truly heroic performance, the location matched its dedication by gifting the variety of ‘good weather’ that it excels at. I haven’t seen so much rain since standing next to a soggy Eric Morecambe during the Longest Street Party Jubilee World Record attempt a fortnight ago.

A night where we become a part of London 2012

On a night specifically designed for the rest of the UK to feel part of the Olympics, I do get a sense of being Team GB in a way I haven’t before. Of being all in this together. Of striving for greatness as a nation, admittedly with the help of the French, at least tonight. It’s corny and wonderful and embarrasingly inspiring all at the same time. And I’m proud to be British, proud to stand in the rain and enjoy myself.

“Once in a lifetime!” Cameron whispers to me when the noise finally stops and the last of the smoke clears.

The flame might have gone to bed for the night on stop 38 of its national tour, but the Olympic spark and spirit lingers. I hope some of tonight’s fire and fury will rub off on the Brits going for the medals.

Check out this video for a taste of Les Commanders Percu in action..

This post is part of our Family Adventure Capital Season. We’re exploring different ways families can adventure together in and around Cumbria, sharing ideas and inspiration to encourage families to get out, get active and adventure together.

Got some ideas for things we should try? Let us know.